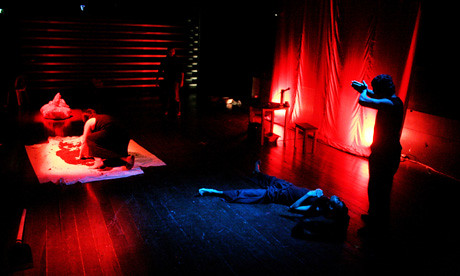 The title Bumiputra Cina is highly political; first, “Bumiputra” in Malay means The Prince (Son) of the Soil, while “Cina” : The Chinese. From the outset the title suggests that Verena Tay’s play – directed by Singaporean cross-disciplinary theatre artist Noor Effendy Ibrahim – might be a highly charged political play about Chinese being the child of the soil in Malaysia (Bumiputra is widely known as a politically charged term used by then Prime Minister of Malaysia Tenku Abdul Rahman in the fifties.) If it were a play about Chinese being the son of Singapore soil, it would be of a different ball game altogether; the national language and culture of Singapore has always been a source of confusion for many, both locals and foreigners, for the Chinese-majority has hegemony over Singapore language culture for a long time, burying Singapore’s Malay roots. These two premises both give rise to interesting cultural and history theatre.

Unfortunately Verena Tay and Noor Effendy Ibrahim’s Bumiputra Cina is neither of the above. It is a play about a Chinese woman’s exploration into her roots in Singapore; an English-educated Chinese woman looking for love – in both real and virtual worlds; a metaphorical reference to a parallel story of a Chinese woman’s life with a Malay man: Lieutanent Adnan; and her son. As much as it is a literary-rich play that talks about the uncertainties Singaporean-Chinese have in the land where culture is performed like a spectacle; the recent hit TV series Little Nonya’s stage-musical version The Peranankan Ball could be a case-in-point here: as with many commercial off-springs of sudden cultural interests, The Pernankan Ball is a money-spinning venture riding on Singaporeans’ sudden interest in Peranankan culture through the colourful set, accessories and costumes in the Chinese television series Little Nonya. This commercial obsession of making everything popular aiming at earning more money spells death knell in cultural development in Singapore. Literally everything has become a fad. Pardon me for taking Singapore’s obsession in “the spectacle” a little too far, for I personally think, to a large extent, it contributes to further alienation of a Singaporean to his/her cultural roots.

The woman in the play is the victim of such a social development. She laments she is unable to understand Chinese culture as a mono-lingual Singaporean, having no idea what it means to live in urban Singapore looking for love on the internet – Singapore is very well connected to the internet everywhere on the island – having lots of academic qualifications, degrees on culture, and yet not knowing what her culture is. All these were played competently by Verena Tay, for it was a confession of sort for the female actor. Verena Tay put on a credible performance, but it was done at her own expense; as what fellow reviewer from Singapore theatre review site Inkpot Kenneth Kwok puts it: “Her well-intentioned attempts at comedy, usually through self-deprecation, often felt awkward and a little too raw, though.” Although this strategy is effective, not to mention the inability of a reviewer to call the performance insincere and pretentious, it is not acting art at the high level of characterisation. Verena Tay did not bring out the culture milieu modern-day, working class women are in, buried in concrete slabs of lifelessness. It seems to me that Verena Tay is fearful of bringing too much of herself to the fore; another disadvantage in performing in confessional mode.

Shahril Wahid and Rizman Putra, on the other hand, were more at ease with their characters, both in culture and language. Sharil Wahid’s performance was sincere and honest; with humanity at best. Rizman Putra performed well in his usual fashion: the ability to go across to other mediums to enhance the theatricality of the performance. His usage of voice in performance was also remarkably impressive. All these made me feeling that both performers are living their cultures fully, for what I get from them is exactly what my Malay friends would be. I am not referring to the stereotypes of a Malay that will reduce them to caricatures. It is the ease they exude when they talk about their lives and their family.

I am totally not qualified to say more on this, simply because I am Chinese. There are some culture nuances which I will never be able to understand. As director Noor Effendy Ibrahim said in an email exchange, “Bumiputra has nothing to do with language spoken. Malaysia, of course, has a heavily politicised concept for Bumiputra, but there is a more essential – spiritual, emotional – meaning of Bumiputra to the Malays, something which was glaringly ignored, neglected or forgotten by the predominantly chinese audience at the performance.” But I would like to argue that as much as I would not able to gain access to the nuances, but I am able to fully understand what it takes for one to live in his/her own culture. It is a combination of every element available in that culture; from food to costumes, tone of voice to the vernacular language, behaviours to social conduct. I was personally moved by Shahril Wahid’s rendition of the Chinese dialect Hokkien in the performance. Even though it was not authentic, it moved me all the same, for the co-existence between two languages in a body is itself a product of inter-cultural exchange. What makes it even more moving is Shahril Wahid’s – under the direction of Noor Effendy Ibrahim – humanity when performing the piece, making love and mutual respect among people of cultures even more important today.

On the whole Bumiputra Cina is a necessary piece of work in Singapore. It touches on the ability of cultures coming together and inter-mingle with each other creating new life. It is necessary to keep these conversations alive.