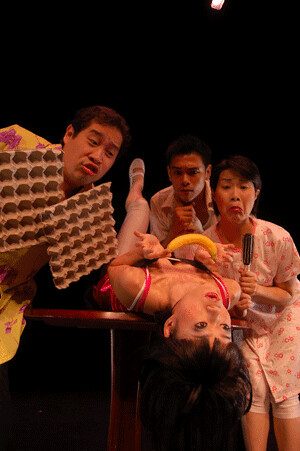 It is not hyperbolic to say that Chestnuts has acquired the status of an institution in the local arts scene. Since its inception in 1996, it has grown to occupy an interestingly fortified position in which corny entertainment and savage satires meld to form a theatre that can be said to be “mindlessly intelligent”: you profit from what it has to say, for example, about the scandals of the local arts scene to which the insiders might only, at best, half-acknowledge, and you get to have a fun night out with your friends at the same time – Chestnuts, without a single doubt, is one of those value-for-money family entertainment shows which one can hardly find, and at an affordable price, on our shores today. Asian Boys doesn’t count – it tries to evoke the more elevated aesthetic instrument of political discourse, so one has to take it at that: face value. In contrast, there is something shamelessly insistent about the way jokes are being cracked in Chestnuts that it leaves no room for doubt as to whether it cares if anyone thinks it might, perhaps, be more respectable to stick to the face-saving strategy of dividing subjects into acceptable and unacceptable materials, or fodder for play. It doesn’t, and doesn’t care. Chestnuts, love it or hate it, you can’t easily dismiss it. Which also means it will be here to stay, whether one likes it or not. The audience certainly did.

There were a number of sketches that I found especially memorable:

1.) The enactment of Royal Shakespeare’s Company staging of King Lear, which had its run at the Esplanade Theatre last year, in which Jonathan Lim played a helplessly schizophrenic Sir Ian Mckellen, who kept switching between the characters of Lear and X-Men’s Magneto. It was especially funny when he went into a veiled polemic of gay activism, during which he did a turn with a book, in the way books were being made to flap like bird wings at the badly conceived finale of Asian Boys Vol. III, and solemnly stated “I am the Seagull.”

2.) When the entire cast broke into a musical number in which Rihanna’s umbrella song was sung entirely in Hokkien.

3.) Celine Rosa Tan’s turn as The Numbers Girl from the infamous and obscene rap commissioned by MDA, and featuring members of its senior management: it got to me each time she enunciated each word with an extra ‘s’.