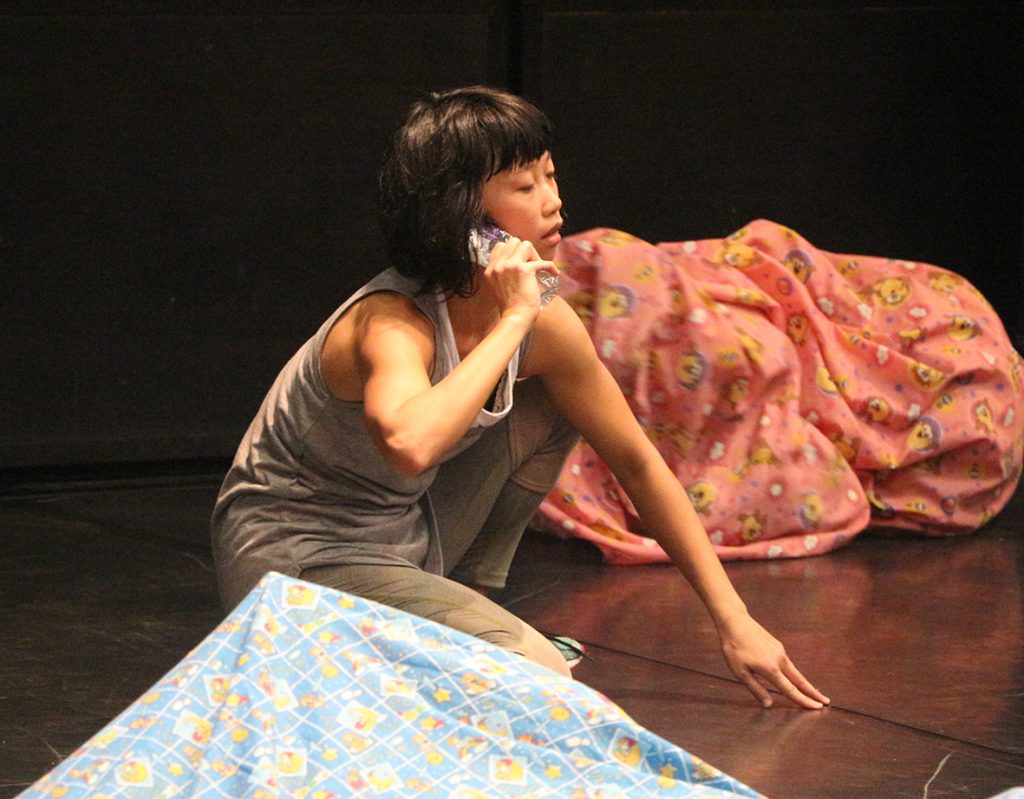 Dancing to Connect | A Review of Move by Lee Ren Xin

The Cultural Management program of the Chinese University of Hong Kong, produces an annual arts festival since 2014. The 2018 edition, entitled Along the Edge was staged at the HK Jockey Club Creative Arts Centre in Shek Kip Mei and curated by program directors Oscar Ho and Benny Lim. As the name suggests, the focus of the festival was the potentially combustible subject of marginalized communities. This year’s program included a photography exhibition Integrity of Being, featuring powerful images of the various hidden and voiceless communities of HK including Muslim women, the homeless and impoverished, sex workers and the LGBT.

Singapore artist Ernest Seah conducted a Splash-and-fun Workshop which was hugely popular, leading participants to work with water colours, and sharing his skills in the use of Chinese water ink. Seah was inspired by and driven to tell the stories of these parallel marginalized communities from a Singapore perspective. Another event was a concert by the Hong Kong Community Philharmonic Orchestra, Hong Kong’s first non-profit orchestra on 21 April that is committed to make classical music more assessable to the public. The third component of the festival was Malaysian dance artist Lee Ren Xin who was invited as resident artist for approximately 3 weeks, which culminated in the performance of Move at the Black Box Theatre on the 19 and 20 April.

Move was inspired by reflections and musings of Lee during her stay, being drawn as many often are, to the frenetic pace of Hong Kong, while sensing the murkier aspects of life lying beneath and amidst its glistening glass sky-scrapers. As audience entered the space, they were immediately struck by the apparent disarray of the chairs, placed in pairs or clusters, and not facing any one particular direction. This setting of chairs was amidst luggage bags of different shapes and sizes, also place randomly. An experienced theatre goer would immediately conclude that this was going to be a more immersive ride, and they were not wrong. Beginning with an intense solo of almost 40 minutes, Lee writhed, squirmed, crawled between chairs and legs, kicked, flung and silent-screamed her body around the room. Meanwhile the audience had to either move out of the way or respond in some way, being doused with her sweat, and threatened (or otherwise) by her physicality, while the stage hands kept rearranging the bags constantly. All this created an atmosphere of great disruption and interruption. Lee’s performance was more introspective, giving the audience an insight into her emotions and responses to these stimuli. As she briefly stepped aside into the shadows of the space, taking a drink of water and catching her breath, the soundtrack changes to a quiet melody If you are on the water by The Saxophone, that evoked images and memories from places far away in our personal histories. From the darkened curtains, cloth bags were dragged onto the stage, and the subtle movement from within appeared almost amoeba-like. Life was struggling to evolve. The music then segued into the sounds of waves and the oceans, and the contents of the bags were strewn all over the stage – plastic bottles, garbage bags, waste paper and wrappers instantly flagging a major problem of pollution of our oceans, and the incredible damage it is causing. Two dancers emerged, Carman Li and Liu Heung Man, who continued much in the vein of the earlier movement quality of Lee’s. They interfaced with the audience and attempted to heighten the emotions that were introduced at the beginning. This then moved into perhaps the most poignant part of the performance when Lee mounts on an abandoned mattress (those who know her work, will realize she has a penchant for mattresses!), and with arms reaching out, helped the dancers onto it as well. With much difficulty, and one side of the mattress lifted, they moved it forward like a raft. It had a real genuine feel of struggling to figure out the mechanics and realizing the necessity of working together to get it to happen. As they maneuvered this make-shift life boat forward, they invited members of the audience onto it as well, “rescuing’ more of the community. It was beautiful in its simplicity and powerful in its message. The Princess by Parov Stelar provided a powerful anthem to the climax, as Lee climbed onto the theatre seats which were retracted, and upon this hill she called her name out and waved one of the blankets, as if signaling for help. Here upon this hill, she found temporary refuge, and perhaps felt like she could be the master of her own destiny.

Lee Ren Xin is a thoughtful, thought-provoking and immensely watchable performer, as were the supporting performers. The ideas inspired by Hong Kong that are germinating in her head, could be worked further with greater reflection and movement investigation, and relevant to city life in many parts of the world. If there was one weakness, it was the lack of movement sequences that was aesthetically captivating, especially for the “dance” audience. The process of a young artist’s journey is fraught with challenges, and it is admirable that Lee keeps going on doggedly. The investigation and investment of time, to find her dance that connects with the audience is a most valuable one.