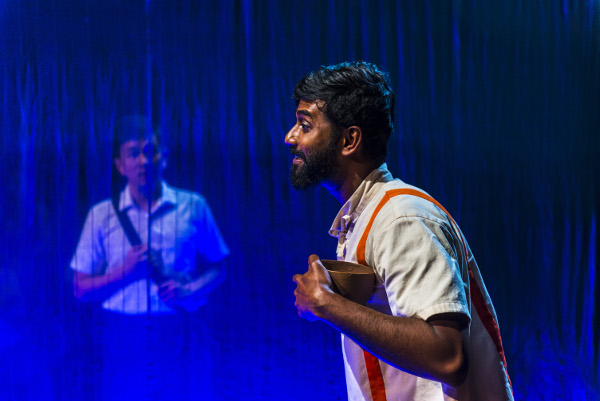 Four Workhorses and A Turtle in Search of An Identity

The fanfare of Singapore’s bi-centennial celebration – counting from the day when Stamford Raffles set foot here, may still be a year away. But if the  cross-cultural productions staged by two Chinese performing arts groups last month are anything to go by, it is way past high time to double-check our understanding of history as privileged citizens of Singapore.

The site-specific production Four Horse Road by Singapore Chinese theatre company The Theatre Practice (April 4-28, 54 Waterloo Street) might seem somewhat random in sequence as it took the audience on a non-linear journey through historical memories of Sio Por (North Bridge Road area). Yet it was informative even as a light-hearted jab at the postcolonial society of Singapore, dating back to days of Indian convict labour and Japanese karayuki-san, and manifesting in different shades of Chineseness from convent schoolgirls to PRC migrant workers.

If its overall effect was a cacophony of a multilingual Babel, intentionally surfacing all the awkward contradictions of our culturally diverse society, Lest We Forget (April 21, Esplanade Theatre) by Dance Ensemble Singapore, in contrast, was an unabashed paean to the heritage of Joo Chiat and Katong, imagined as a perfect embodiment of an integrated national culture. The underlying dynamics in cultural politics here are indeed something to chew on.

Able-bodied Chinese dancers, complete with props that represented fishing nets and what not, served to paint an idyllic and nostalgic fishing village. Augmenting these scenes with an unmistakable message of racial harmony that would not be out of place in a National Day Parade, guest dancers from Sri Warisan peppered the centrestage with silat and zapin moves now and then, to some fusion music of a Chinese flavour.

Further entertainment value was provided by sparks of intercultural humour with Malay and Indian characters, though the representation of Singapore’s ethnic minorities was ultimately overshadowed by a dominant Nanyang narrative riding on the bandwagon of Peranakan material culture.

But if there is just one complaint to be levelled at the conceptualisation of this production, it would be how its aestheticising of Singapore as a fishing village is further laden with an image of the turtle (from which Katong supposedly derived its name). Perhaps too much contrived significance is invested in this symbol here, what with harmony with nature, as well as the ‘return’ of a people to their ‘home’ or culture after long drifting in the seas. Should that be decoded as suggesting the Peranakan Chinese are finally returning to their ‘Chinese roots’, or that Singapore is finally acknowledging the key role of the Straits Chinese throughout colonial history?

It does not help that the Peranakan and Straits Chinese are complicated categories in ethnic identity. Chew Joo Chiat, the historical figure which forms the inspiration to the main story here, is an interesting case in point. He had travelled to Singapore from Fujian, China and married the daughter of a Peranakan businessman as his second wife. He soon bought land from the Alsagoff family among others to develop as plantations and would hire Malays for his copra business too, but he also had association with Chinese nationalists and was known for building a wayang stage across the road, such that he could watch Teochew opera from his own balcony.

It was just last year that a descendant of his, Philip Chew, wrote a book entitled A Penniless Boy, Chew Joo Chiat, debunking previous description of the man as a ‘Peranakan’ businessman. But a dance production like this, not designed to chronicle family history like a soap opera, has to forgo details for simple caricatures. The result is a conflation between the general narrative of overseas Chinese braving the waves to settle down in Nanyang (the ‘south seas’), and a simplistic narrative of Peranakan culture being a hybrid between Chinese and local cultures through inter-marriage.

At some point, the picture of little Chinese girls dressed in kebaya may come across as somewhat kitschy, as they would re-enact the learning of bead-making as a Peranakan tradition, while readily answering their elders in perfect Mandarin. Perhaps it is a way to reach out to a predominantly Mandarin-speaking audience. In this regard, the production has not only served to mainstream Peranakan culture as being one with the Chinese majority, but also made subtle efforts in conveying the hardship of the Malay villagers and Indian labourers.

If Lest We Forget thrived on the vibrancy of ethnic dance in myth-making of a heritage place, Four Horse Roads had the advantage of being a site-specific performance that made history come alive, except here any grand narrative of the four CMIO ‘races’ would give way to urban legends and stories of the marginalised and transient in society. And while the former stopped short at poking fun about the darkness of old places in Katong without mention of Pontianak, the latter relished in popular tales of haunting from the yesteryear, particularly that of Orang Minyak.

If fear of the exotic other is a key underlying issue to be overcome in either of these productions, the most brilliant moment of intertextuality in Four Horse Roads is to be found between two stories of a Chinese in Singapore encountering the life of an Indian. In one scene set in the current day, an atheist PRC worker employed in a hotel is puzzled to find an Indian Singaporean performing some Hindu ritual in the back alley and sharing that he also prays to the Chinese deity Guanyin despite his ethnicity. In another story staged in the Centre 42 black box, the audience find the same two actors, one playing an Indian convict in 19th-century Bras Basah, the other playing a Chinese student who fails to appreciate his life in an elite school.

There may not be any direct reference to the daily life of Indian migrant workers currently, but the 1915 Sepoy Mutiny in Singapore is enacted from the perspective of sex workers isn’t a red-light district, who speak a mix of Hokkien, Japanese and Russian. The centrepiece of the performance however would be a nightclub where a Japanese general’s merrymaking is interrupted by freedom fighters demanding the whereabout of the man Lai Teck – history would of course inform us that he was in fact a double agent eventually betraying his comrades.

Though the vignettes in the performance are generally too short for any character development, it is a clever attempt in engaging with a historical area which has witnessed much diversity in culture and religion, without being essentialised and marketed for tourism like Chinatown or Little India. The scene of two convent schoolgirls, terrified by a suspected haunting, trying to pray half-heartedly with the rosary despite one subscribing to Taoist practice at home, probably draws some chuckle, but even that is a good reminder of how identity is a phenomenon of one’s social environment and nothing eternal.

In short, one sees two starkly different approaches here in presenting our multicultural history. One production virtually spoon-feeds a story to the audience with an onslaught of picturesque images, while the other leaves the audience with a permutation of dotted lines to be connected on their own. But both should attest to the power of theatre in shaping thought and identity.

Wong Chee Meng obtained his PhD in heritage studies at the Brandenburg Technological University Cottbus in Germany in 2013 with a thesis on intangible heritage and intercultural dialogue in Singapore. He has taught modules on Chinese cinema and Chinese cultural history as a postdoctoral fellow with Nanyang Technological University. He is currently a freelance researcher with a focus on tangible and intangible heritage of the Chinese community as situated within the cultural diversity of Singapore.