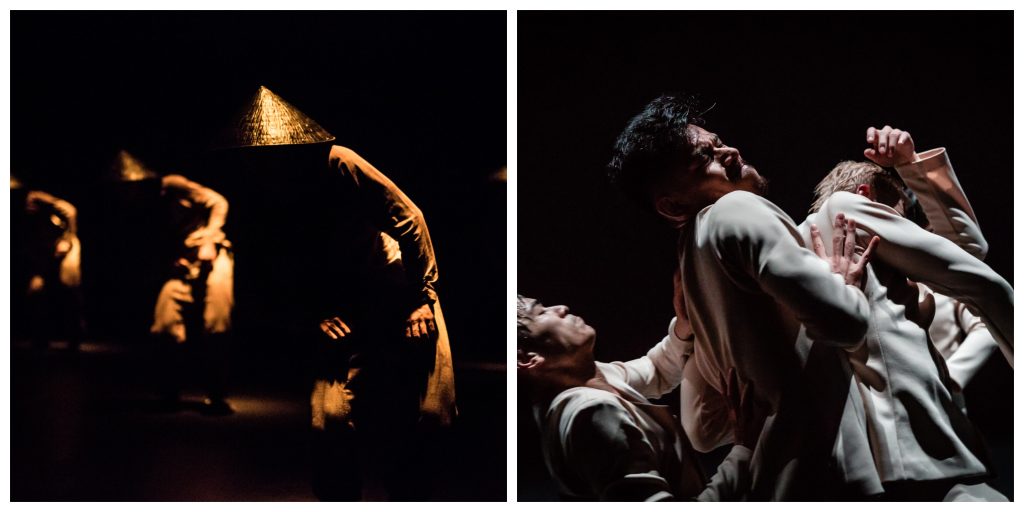 From Orientalist Views to Misread Data

I applaud dancers Anthea Seah, Brandon Khoo, Billy Keohavong, Lynette Lim, Ng Zu You, Afiq Noorazwa and Klievert Mendoza for their good effort with Earth and Filled with Sadness, the Old Body Attacks. Under the stewardship of Kuik Swee Boon, the company has exhibited good showmanship in terms of technique, speed and strength. I can’t possibly be sure that the bodies have embodied the “T.H.E” aesthetics. If we were to use a previous work As it Fades as a reference point, Earth does not seem to have progressed much from it, besides the usual forceful and fluid movements that open every unit of its choreographies, aka T.H.E. ‘style’.

Conceptually, Earth (choreography: Rudi Cole and Julia Robert Pares) is exploring natural phenomenon. To understand nature through Eastern mysticism and Western physics is a misguided western orientalist binary of how nature works. The choreography failed to understand Lao Zi’s Daoism on the flow of nature. It is a philosophy that explores the intricacies of how nature operates. It is not mystical. Dancers were asked to mimic the fluidity of Qi in nature and by using the laws of physics to work one body against another, I wonder what the outcome of such futile experiment would be. The best takeaway is perhaps the beauty of the bodies on stage, but they lack the precision and clarity likens the Chinese dance collective Tao Body, where one of their early previews in Singapore in 2011 has successfully established their body signatures anchored on fluidity and flow. In terms of music and sound selection, slow preludes that introduce the units in the choreography are staid and uneventful.

The second piece Filled with Sadness, Old Body Attacks is an adventurous and rather unrealistic, dancer-unfriendly choreography of resident choreographer Kim Jae Duk. Like a research that does not give due care to the data in which it studies, the thesis is personal and trying, filled with fallacies. Critique on the oppression of religion is not strong and merely representational. Dancers have been forced to execute movements that show the intensity of the oppression. The showcase exposes the lack of theatrical direction with metaphors and allegories that could better bring out salient messages. Female bodies Anthea Seah and Lynette Lim are merely supporting roles that do not seem to scaffold any major points in Kim’s argument. Their bodies could also be easily ignored as they don’t seem invested in their movements. They seem to be putting in too much strength and intended to get the movements out of the way to go to the next unit in the choreography.

The choreographic journey is also an extremely difficult one for the male dancers. Billy Keohavong struggles throughout the dance piece, not as the character, but as one who tries to fulfil the unrealistic demands of the choreography. There has been too much going for him. Every movement does not communicate and mere cosmetic. Afiq Noorazwa and Klievert Mendoza also try to keep their movements in line with the aesthetic demand of the piece, which end up fulfilling their roles as weak supporting pillars. Male dancers also find it difficult to lift their counterparts in one of the units. To me, dancer Ng Zou You has been badly deployed in the piece, for most of the units of the choreography do not suit his small and agile body texture. The big stomping movements merely amplifies his inadequacies.

Overall, both pieces have not created impact. They are laudable experiments, but do not seem to converse with audience members. As mentioned in my opening paragraph, the dancers are a joy to watch, but they have not been utilised to the best, materially and not merely physical forcefulness, which is a false sense of strength.