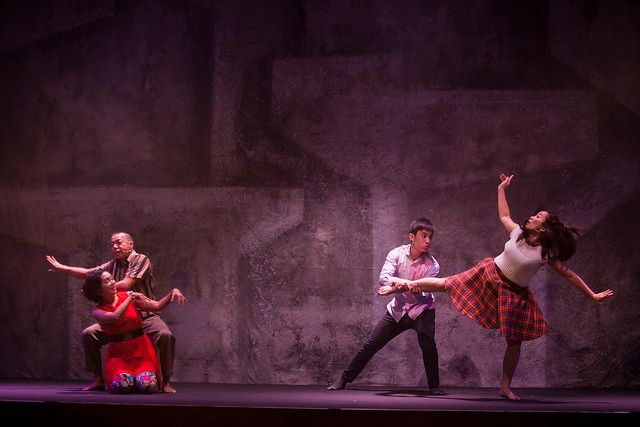 From the eyes of Brandon: Cheras, the musical

“Suspended…shackled…in a cycle of nothingness”

Many of us who grew up in the suburbs would have resonated strongly with Chee Sek Tim’s latest creative pursuit which depicts the struggles of the middle class attempting to break free from an endless cycle between nothingness and taking a leap of faith for our dreams.

A fun-filled musical revolves around the life of Cherrie Lum (Marina Tan), a long-forgotten pop star from the 80s and her children Blossom (Yon Lynn, Tan) and Jackson (Jayson Phuah), trying to get out of Cheras- or not to. Cherrie is utterly obsessed with her glamorous past; unhappy being shackled by the reality of no longer a maiden in her prime and her growing responsibilities as a mother.

While she attempts to live a double life as a singer in a club and a mother, she had forsaken her children, having them fend for themselves since young. Every so often, all we need is a little push to go over our limits; it all began with a fight between Blossom a fickle-minded entrepreneur who have yet to succeed and her brother Jackson who is a successful career man who wants a comfortable life in the suburbs.

In a glimpse of an eye, their whole world collapsed to ruins with out of sync footsteps and desires in life. Cherrie wants Blossom to be a star by winning a reality singing competition, Blossom wants to be rich and break free from Cheras while Jackson wants to remain in zero motion.

The musical is an organized chaos, with a mildly successful portrayal of the buzzing and busy life of the lower middle-class dwellers of suburb Cheras. The writer personally enjoyed the chaotic scene transition where the cast started changing costumes on stage and chairs transformed into a vehicle.

The production is indeed “buatan Malaysia” (Malaysian-made in the Malay language) with blends of Manglish, slangs and gestures unique to the country. However, elements unique to the Cheras community. Cheras is more than just another suburb. Many would describe Cheras as a nation on their own, a nation heavily influenced by the Chinese culture. Cheras, in many contexts, refers to Chinese.

The writer grew up in a predominantly Chinese suburb an hour away from Cheras, like many similar suburbs, the community is heavily influenced by music and films originated from Hong Kong, Taiwan and China. Some of the notable stars are like Leslie Cheung (張國榮), Anita Mui (梅艷芳) and Jacky Cheung (張學友). The top of the head concerns is always if their children are capable of stepping up in the ladder of success.

In contrast, the flow of the musical is heavily influenced by the Western culture. From the ball gown, Cherrie wore at the opening scene to the not-so-lower-middle class struggles of her children. From their idea of breaking from suburbia means living a lavish life in the Western world to understanding the importance of family bond. Every step of the way has a Chicago and Dreamgirls ring to it, which is fabulous to watch.

One which strikes the audience the most are the genuine relationship between Cherrie and her children. The love-hate relationship between Blossom and Jackson is impeccable, the casts who played both roles are rising star in the performing arts world. Blossom (Yon Lynn) is a powerhouse vocalist with an endless burst of energy meets Jackson (Jayson) who did exceptionally well in his first lead role showcasing his versatility in vocal, choreography and acting. The ending was priceless, with Cherrie discovering the power of the Internet, let’s hope we can see a sequel of the show where she and her children became true stars.

Everyone left the hall with a bright smile on their face, well humoured. Also, knowing that we all have the ability to break free from the vicious cycle of nothingness and bloom into our dreams. The question is, do we want to do it, or not?

Showing the Diversity in Traditional Form, a Reflection on The Tree, by Dua Space Dance Company (Malaysia)
What I learnt from Shanthini Venugopal’s Look at Me.