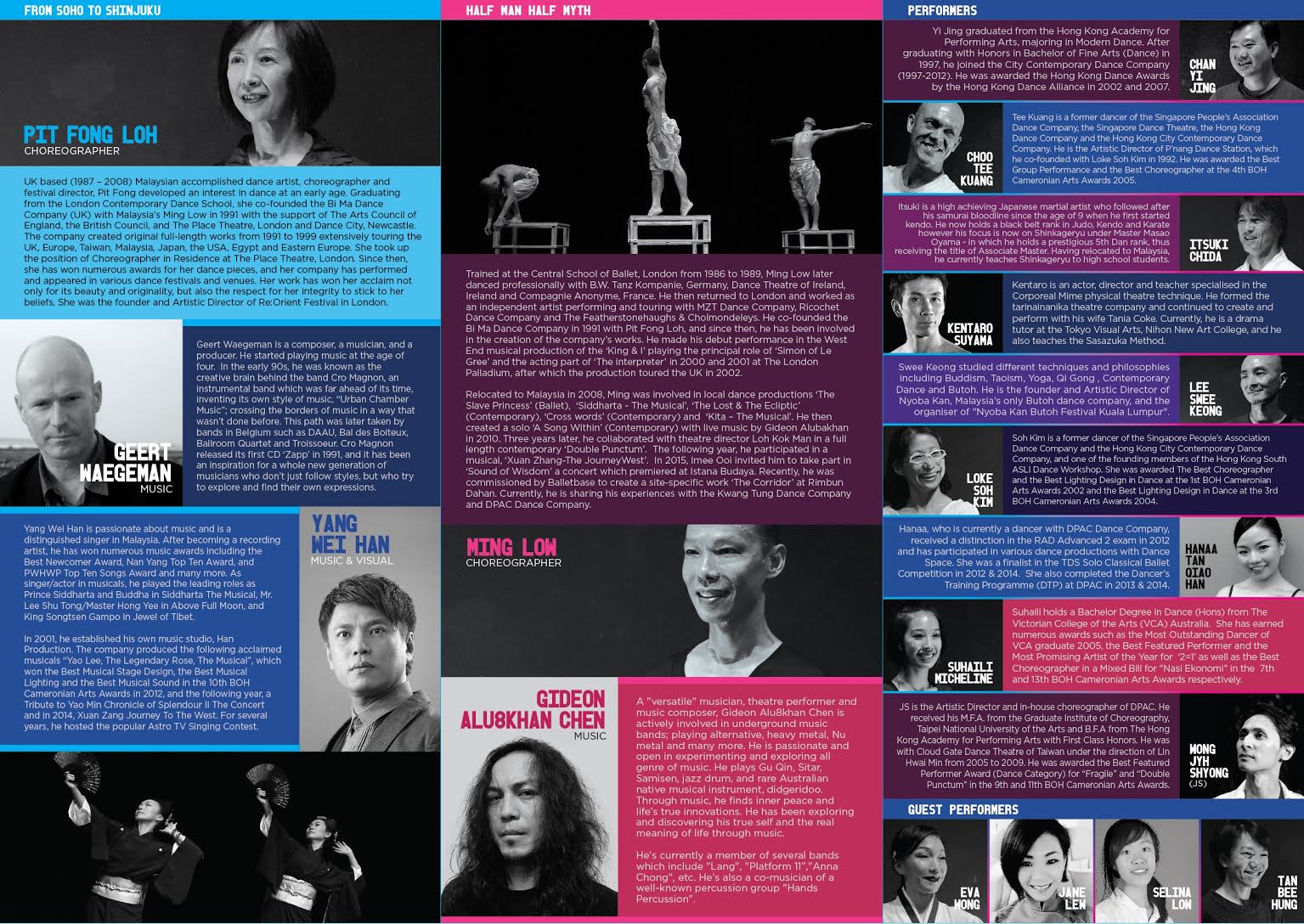 Coming June 10 to 12, Malaysia’s Damansara Performing Arts Centre (DPAC) will present choreographer Loh Pit Fong’s acclaim work From Shinjuku to Soho, and Half Man Half Myth. Loh Pit Fong is considered as one of the first contemporary dance practitioners in the eighties in Malaysia. This work was created during her sojourn in London (from 1987 to 2008) under the auspices of the dance company named Bi Ma Dance Company, founded by her and co-dancer Ming Low. Bi Ma Dance Company is supported by the Arts Council of England, The British Council and The Place Theatre, Dance City in Newcastle. Originally choreographed with a cast of five dancers of Bi Ma Dance Company, Pit Fong Loh’s From Soho to Shinjuku provides the inspiration for a vibrant concoction of dance and design in a piece where the similarities and differences, and the highs and lows of the two cities are explored.

To Loh, the citites of Shinjuku in Tokyo as well as Soho in London exhibit different textual qualities. The Japanese are considerably more reserved than Londoners, with a tinge of strong undercurrent. Conversely, London is more expressive and direct in terms of its outlook. Pacing in the cities is one of the more important qualities favoured by Loh, as every step Japanese takes has its own reserved tempo as opposed to the other city. In addition, identities in which the cities assume – both physically and psychologically – are also explored. Lastly, uncertain values – a paradoxical phenomenon experienced by peoples in cultures mixed and appropriated by migration – are also interesting phenomenon which dictates the evolution of the cities.

The other piece is Malaysian dancer-choreographer Ming Low’s Half Man Half Myth. It explores the physical body within a constrained space focusing on the flow of energy, the quality of movements and human expressions in connection to music and lighting. The restaged version of Half Man Half Myth is revived with original live music performed by Malaysia’s musician Gideon Alubakhan, costume designed by Lagenda Leng, lighting designed by Tan Eng Heng; together with a 4-member all male mature dancers including two members of the original cast, Lee Swee Keong (Founder & Artistic Director of Nyoba Kan) and Ming himself. Two new cast members, Wong Jyh Shyong (former dancer of Cloud Gate Dance Theatre of Taiwan & Artistic Director of DPAC Dance Company) and Choo Tee Kuang (former dancer of Hong Kong City Contemporary Dance Company) have also joined.

A review of the dancers reveals the strength of the veteran dancers in the two pieces of work. Most of them are former members of the defunct dance company Guangxi Dance Troupe active in the eighties. Made up mainly of dance enthusiasts, anchoring on Chinese dance as foundation, dancers were exposed to contemporary dance under the guidance of Loh Pit Fong, whose influences from the Canadian and British dance scenes, as well as dance greats such as Merce Cunningham and Martha Graham. The dance vocabularies were well ahead of their time in the various dance competitions held in Kuala Lumpur.

Interestingly, a new dancer Suhaili Micheline has been invited to take part in the choreography. Micheline has gained pace over the years and having won the Cameronian Arts Award for the Best Choreographer in 2016 for her work Nasi Ekonomi alongside Faillul Adam. It would be interesting to see Micheline’s eclectic body in a Loh Pit Fong’s work. Micheline’s personal work Flatland with Terry and the Cuz was one unique work that defined experimental dance work in the context of theatre making in Malaysia. Another work of hers A Delicate Situation also garnered a nomination for the 2015 Australian Dance Awards for Outstanding Achievement in Independent Dance.

Contemporary dance in Malaysia has come a long way with many promising young dancers and choreographers in the scene, but to discover the myth of the defunct Guangxi dancers is a good enough reason to give this production a try.