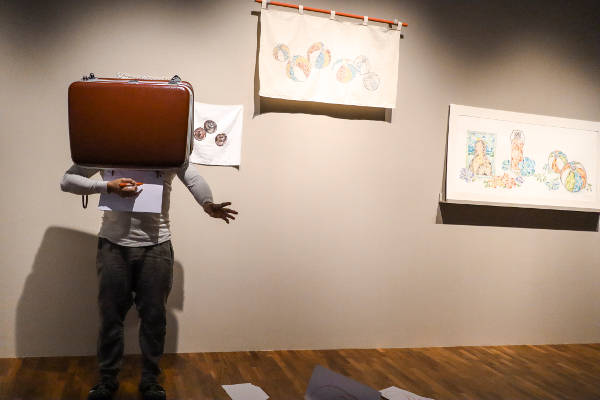 This is an extended series of Banana drawing based on the idea of DESIRE, LOVE and WEAKNESS.

He will do a live drawing based on his senses and intuition.

Justin Lee is a Singaporean visual artist and designer. He has participated in numerous artist-in-residence progammes in Japan (Fukuoka, Studio Kura 2012/14, Itoshima Art Farm-2014, and Tokyo Youkobo-2013). After his graduation with a Diploma in Visual Arts (Fine Arts), he was one of the selected local artists trained at the Tyler Print Institute in New York. Over the years, he has participated in numerous exhibitions held in Singapore and internationally (2000-2002).

As one of Singapore’s foremost pop artist whose design projects reflect a fine sense of contemporary design flavoured with an essence of Singapore traditions, Justin’s work deserves accolades as both designer and artist. His approach to design is executed with current graphic fundamentals yet reflecting traditional techniques such as his on-going series based on paper-cutting and Chinese woodblock printing styles. The themes and imagery with which he interprets his commissioned design work underscore familiar Asian cultures with a delightful pop treatment that celebrates Asian values in an endearing tongue in cheek manner.

Justin is both an accomplished artist and graphic designer whose work has been recognised through commissions by SAM, the Esplanade and the New Majestic Hotel. Earlier in his career, he had been handpicked as one of 6 of the STPI’s first interns to work with world-renowned artists such as Frank Stella and Donald Sultan. He believes that art play an important part in helping people to grow and to see the important role play and awareness of themselves. His works also reflect on words and images from the mass media like signage, billboards and consumer products which control our thoughts and expression.