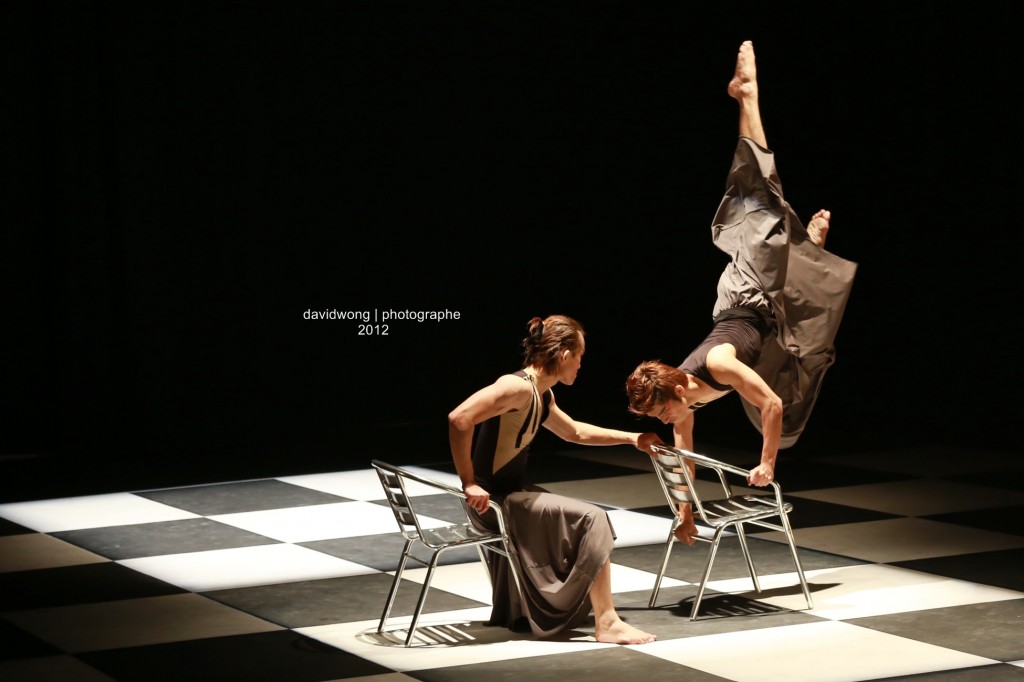 Perhaps, A New Aesthetics for Chinese Dance With Wushu in Malaysia

Johore-based (Skudai) dance company Lee Wushu Arts Theatre has travelled to many different places to perform. They have presented performances in London, Korea, Hong Kong, Taiwan, Indonesia, Singapore, to name a few. Their works — mainly with a strong fusion of Wushu (Martial Arts) and contemporary dance — have earned them accolades. They are also popular in their hometown in the state of Johore, in Malaysia. The way they operate seemed like a big company; but they are actually a young company (the average age of company members ranging from 15 to 17), with the artistic director Lee Swee Seng merely in his thirties, and two of his strongest dancers averaging at 23 years old. I had a good opportunity to catch their production named Farewell, My Concubine — The Movement of the Martyr in 2011. It was a production that featured the company’s two main dancers: Ter Wei Lun and Cheong Kee Qing. Their bodies sparked my reflection on the co-existence of martial arts and contemporary dance — of which I felt was rather difficult, given that both forms of movement are very different; not to mention martial arts, a more restricted one. This afternoon, after watching their performance again in their latest offering Wushu Madness II — The Realm Between, I was convinced that the seemingly different forms could actually come together, albeit philosophically. A new way of looking at it is necessary: Philosophy precedes physicality, it is.

Young martial arts exponents in the company were exposed to the techniques of the various forms of Chinese martial arts; Philosophically, they have also been trained the way of the martial arts, which includes the heroics of fighting, as well as building mental strength, amongst others. In the production, strong physicality notwithstanding, the young martial arts exponents displayed their physical skills with great dexterity. As much as the expression of martial arts is inherently competitive, its beauty lies in the poetry within the movements. Hence, as a suggestion, the performers might want to try to reduce their eagerness in expressing difficult skills, and to try to achieve theatre (the theatrical experience) (1). Their youthful energy was great, but with little groundedness. Conversely, it is also natural for young people to readily showcase their skills to others. It represents vibrancy.

Vibrancy is also present in the production design. Loh Kok Man and Au Sow Yee’s lighting and video projections provided depth to the production, extending the intended meaning of Chinese philosopher Zhuang Zi’s《庄子》 Dream Butterflies 《梦蝶》on stage. However, unfortunately, the metaphor of butterflies failed to link up the various elements in the production cohesively, for most parts of the production featured solely the display of martial arts and contemporary dance. Because of this, the video projection and the lighting sequences served a rather decorative role, more than an artistic one.

Artistically, the production was rather cursory. If its artistic intention is to stage a production that showcases company members’ skills, and also exposing younger members to performing in public, it has done a remarkably good job. Artistic director Lee Swee Seng’s choreography ensured that every single company member gets his/her due recognition. Their physical martial arts skills are strong, notably, Anne Li, Lai Chun Hong and Koh Wei Han. They have indeed done the company proud. However, as an art piece, more could be done. However, interestingly, in one or two of the solo performances of Ter Wei Lun and Cheong Kee Qing, vignettes of a possibly new dance aesthetic emerged. It might lend itself to a good discussion.

Avid Chinese movies-goers might agree with me that the sword-fighting movies of the nineties are probably the best, in terms of content, fight sequences and aesthetics. Notably, directors like King Hu, Tsui Hark and Tony Ching have created Chinese swordsman (Wuxia) movies that resonate with a whole generation of movie-goers in the nineties. These movies not only have great sword-fighting scenes, but also equally potent in literature, love and heroism (albeit the Chinese way). In all these movies, though Chinese in nature, focus has never been on Chinese-ness, but on the thematic narratives.

What have these Chinese movies got to do with Lee Wushu Arts Theatre’s performance, one might ask? It is a question for Lee Wushu Arts Theatre to consider, perhaps. For the dance qualities exhibited by both young “most-experienced” dancers in the company have exhibited seemed ready for further development. They are ready to tackle more mature themes within the Chinese Wushu culture: Humanity, Love, the Spirit of Heroism, and politics.

Dancer Ter Wei Lun’s performance as the King of Country Chu, and Cheong Kee Qing as the concubine in artistic director Lee’s Farewell My Concubine — The Movement of the Martyr in 2011 was a tad awkward, as a duo. However, in this performance — The Realm Between — Ter Wei Lun’s exhibition of masculinity in his movement has become much more impactful; Cheong Kee Qing’s feminine rhetoric, more pronounced and detailed. There is marked improvement. However, what’s lacking is their ability to “hold their own moments”. Ter Wei Lun’s technically strong skills, notwithstanding, is hindered by an over-eagerness to perform. As much as speed and motion is important in executing the different martial arts moves, the performer should also understand that audiences need a space for reflection, allowing them to soak into the thematic of the show, without which strong movements and speed will merely be displays. Conversely, his counterpart Cheong Kee Qing has made tremendous technical improvements from the referenced performance: Farewell My Concubine — The Movement of the Martyr. He looked more relaxed, and devoted more focus on the execution of Lee’s choreography. He was also able to effectively hold the moments in his two solos, allowing audiences to relish his movements alongside Au Sow Yee and Loh Kok Man’s stage theatrics. The most impressive of Cheong Kee Qing’s routines were mainly floor-works.

A young company on the path to success. Together with his young artists, Lee Swee Seng has a grand vision: Wushu in Dance, and Dance in Wushu — a highly intercultural experiment involving two distinct physical forms. It is capable of producing a new aesthetic in the vibrant and rich Malaysian dance scene. A company to watch out for.

(1) In Chinese culture, the theatrical experience takes a different form, as compared to a western understanding of the same word. It is about what’s left unsaid, left untouched, left for one to experience on his/her own.