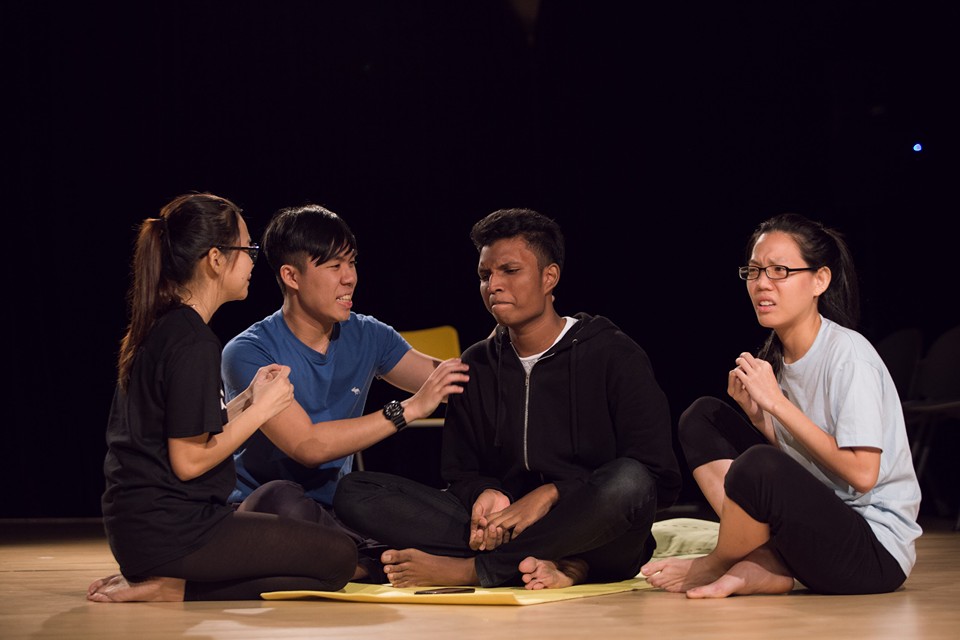 ‘Scabs’ debuted last night at KLPAC with a small cast and a respectable audience turnout. I was pleasantly surprised that the play turned out to be strangely brave and had a resonant quality as I had been apprehensive about its content.

Nearly everyone I spoke to afterward said they knew someone who was like at least one of the characters. One viewer said that he felt that the play represented the real life stories well but that people do not come to the theatre to see ‘real’, but ‘real made better’.

Directors Kenan Yeh & Wendy Wong’s inspiration came from the real life stories of people they knew and they attempted to keep the play as close to the source material as possible. Perhaps thinking of the three characters as merely photographs of someones’ life hindered them in filling out the play. Life is an ongoing, ever-changing creature but the moments represented on stage are chapters of a persons story. Theatre demands a more complete story, for the progression of events to make sense, even if only artistically.

The first segment was a look into the life of a gay teen, it showed scenes which are playing out in thousands of homes all over the world every day: a scared gay teen afraid to come out to homophobic parents. I think the scene where the family is having dinner and talking was supposed to be emotionally heightened and intense but it felt very static and tedious till the father lost his temper.

Lim Zhi Yue (John) played an angry father in two segments and has a real talent for playing the intense emotions. He was barely noticeable till his character lost his temper. At that point, every eye on the house was on him instead of the lead: you hated him as he beat his stepson, you flinched when he walked past you.

There were moments of magic, such as in the third segment, when Thomas Alexander’s character was intensely trying to project a happy social media image while recovering from a beating by his stepfather and while fighting with his mother.

Another moment was when Anna Chew Jia Yi’s character screamed in frustration and flung a pair of boxing gloves at the floor. Though the lead up to it had felt contrived, that moment of screaming frustration was a believable reaction to an impossible situation.

Social media apps were given faces and characteristics and were portrayed fairly believably in the third segment. The actors clearly put thought into trying to represent the apps anthropomorphically.

The second segment was placed well in that it did not end the show. It was the hardest segment to identify with, and though it used an interesting plot device by way of a flashback scene, it was difficult to follow. The waitress in the segment played ‘drunk’ better than she played ‘sober’ and the point of the segment was a little slippery to grasp. It was intended to show that though the drunk customer was suicidal, the real story is the waitresses’, but it ended up feeling like the suicidal customer was played down as not as important as the homeless, orphaned waitress.

It was vaguely uncomfortable to be critical about this play because I knew that the characters were playing real life stories of people who had suffered and survived their greatest pain. Yet, it is not enough that the source material is interesting, the play must be evocative. Theatre is a representation of life and while staying true to life is a noble endeavour, uncovering life and making us look at the naked painful truth underneath is more necessary.

I should have left the space feeling like I had seen the truth or like it had changed me but sadly it failed to reach that peak. Thomas Alexander described preparing for his role as coming to terms with a ‘tornado of emotions’. We, the audience, should have been swept up in that tornado as well.

Though, considering the youth of the directors and the relative inexperience of the actors, it was a pleasant and engaging night. We can certainly expect to hear good things of the directors in the future.

Butterfly Lovers – a bodily experience about love.
From Tokyo to London to Kuala Lumpur: A Fresh New Breath Amongst Upcoming and Veteran Dancers