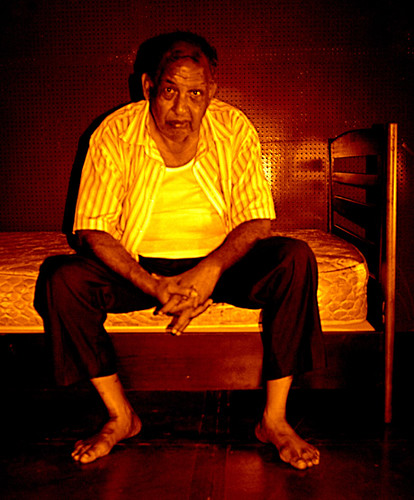 It’s not easy to stage a Samuel Beckett play in Singapore. Not unless you’ve got a household name or a company with a large enough reputation to pique an interest. World-In-Theatre had neither, and coupled with possible swine flu pandemic in Singapore, the collection of the absurdist’s lesser known works had a very lacklustre turnout on opening night. To add to their woes, actor Jocelyn Chua, slated to perform in two of the four plays with a cast (the opening piece Breath has none), was quarantined and disallowed to perform. This resulted in a very poor showing of Beckett’s Precious Little.

That said, a weak night doesn’t translate to a lack of vision. The theatre group after all does deserve credit for bringing to stage works other than Beckett’s seminal Waiting for Godot or End Game as an exposition of the famous playwright. If theatre is about imagination and stirring curiosities, then in potentia this play was far more enriching and beneficial than watching yet another classic or another comedy or musical.

[A disclaimer: Being less than familiar with Beckett’s works myself, I looked for the five scripts lined up that evening to build a platform for comparison and discussion, so I hope the following commentary won’t be too far off the mark.]

Labelled an absurdist, Beckett’s works have tended to capture the bits of humanity that remain when all of civilisation and its constructs – physical and ideological alike – are atrophied. Take away the idea of a society and all that remains is a person and the god-shape void that translates to faith in its purest form. This leads to the macabre, the humorous, and the ludicrous, hence the absurd.

Written between the mid 50s to 1965, Breath, Act Without Words I, Rough for Theatre I, Eh Joe, and Act Without Words II tend to do the same, though they were also explorations on the concepts of performance as well. World-In-Theatre had thus prepared a promising assortment of pieces to interest the Beckett aficionado exploring mime, the absence of actors, and television. Dramaturgically Precious Little was effective, with a commendably delightful visual and sound design from its score to its visual imagery, down to its props and props handlers. The composition of the pieces thus balanced humour, fancy, and melancholy befitting of the playwright himself.

It was however a very uncertain, imbalanced night, with director Shelly Quick replacing Jocelyn Chua for Act Without Words I and a highly truncated, “Chua-less” rendition of Rough for Theatre I. Breath was left to open the show for far too long, which made what was originally written for a brief, half minute impact lost on its audience; and having the quiet Eh Joe instead of Act Without Words II bookend the evening (according to the show’s original programming) left one severely wanting.

I shall however leave these teething issues out as logistic dilemmas. What didn’t sit too well with me performance wise was the pace of the pieces, regardless of the order in which they appeared. While actors Elizabeth De Rosa, Mohan Sachdev and Shelly Quick pulled off rather skillful performances (it’s hard to gauge Phillip Marcelo’s for he had no one to play off in what was meant to be a two-handler), they felt a little misplaced at times in Beckett’s landscape. One speculates it has partly to do with the philosophies in Tadashi Suzuki and Anne Bogarts’ (SITI Company) methodologies – used to prepare the actors for groundedness, focus and responsiveness – clashing with the absence of purpose in Beckett’s plays. Choice equates to action and therefore intent, and Beckett’s characters often begin in a state of mind where there is none. As a result, “Act Without Words I” started already much too energetic for a piece about a man in isolation in a desert, leaving little room for dramatic exploration as choices and options presented themselves, hence leaving one sympathising very little with the character.

Eh Joe on the other hand is quite a different pickle. Written for television, its purpose was to generate an intense listening experience for the new medium. The script begins with Joe methodically going through his room, followed by the camera equally methodically closing up on his face (1) and eventually his eyes, as a Voice, a ghost of his past perhaps, speaks of his former actions that have (possibly) led to a girl’s death. Spoken slowly and emotionlessly, the violent imagery is formed in the mind’s eye, like in the act of reading, juxtaposed with Joe’s eyes as a point of entry into his psychosis. Naturally, numerous interpretations and adaptations have surfaced for the stage and screen, but it is clearly a play on sight and words.

In World-In-Theatre’s effort, the opening business is skipped, and immediately Joe is seen sitting on his bed in his thoughts. Set-wise, a close-up of Joe was projected behind the bed, accompanied by the still photos of Joe up-close, such as of his eyes and hands, on the other side of the traverse stage. A live, miked Voice (Carol Camoens) then spoke slowly to Joe, as per the directions in Beckett’s text. One was however challenged to watch and listen to the words of the Voice in a different way, for it had to contend with the many choices for one’s sight: the two screens, the actor, the space, the operating booth, and other audiences. The success of this adaptation thus varies in several ways; for audiences with the presence of mind to consider its artistic bearings, it was an effective commentary on the loss of the word in a mediatised modernity; for those looking into the performance of its actors and its direction, it was probably slightly too subtle a work but commendable nonetheless; and for those with access to neither faculties it was likely a dreadfully dull way to end the evening – made worse by the fact that it was the only piece after intermission.

But this, I suppose, is World-In-Theatre’s relevance, to be small enough to dare take on such experimental plunges, without fear of not having bums on seats, hence offering more food for thought than the spectacular bonanzas and faux pas that keep gracing Singapore’s box offices. And at least the concept behind Precious Little and its faithful preservation of Beckett’s dry text, visual concepts and wit were strong enough to inspire this reviewer to think a little harder about the work than write it off as a small and meaningless failure. I for one personally loved the intricate and wicked business in which the goad on wheels poked Beckett’s characters awake, the music and choreography for Act Without Words I and II, and the weight of Mohan’s performance (2), the last which would have been better if I wasn’t so darn distracted. [But I hear the piece was improved significantly by the second evening, having increased the volume and therefore the Voice’s omnipresence.] And it would be good to see a screen version of Eh Joe developed by World-In-Theatre, having seen its interpretation for the stage. In spite of a rocky start, there was enough in Precious Little for a befitting homage to the works and ideas of Samuel Beckett..

(1)“[C]amera has nine slight moves in towards face, say four inches each time. Each move is stopped by voice resuming, never camera move and voice together. This would give position of camera when dolly stopped by first word of text as one yard from maximum closeup of face. Camera does not move between paragraphs till clear that pause (say three seconds) longer than between phrases. Then four inches in say four seconds when movement stopped by voice resuming.”

(2) A poignant casting choice considering that he once had a memorable role on Singapore’s television as Growing Up’s Uncle Govi.

Links to the 1989 television production of Eh Joe (divided into parts 1-3 on youtube) on video (directors Walter Asmus and Samuel Beckett, Klaus Herm as Joe and Billie Whitelaw as Voice)

Terence Tan recently completed his MA in Theatre Studies, NUS. His thesis, “’Young’ Actor Studios: Developing the Stage Actor Through Praxis Communities”, holistically explores the relationship between the emergent actor and the scene, whereby youth has now become an undeniably important quality for companies and actors alike. With this the paper teases some of the more problematic aspects of the scene’s ecology, and at the same time questions the applicability of our local research on theatre in Singapore.

A Review on Sounds and Fury, by Food 03, Post Museum
Bumiputra Cina | A Review