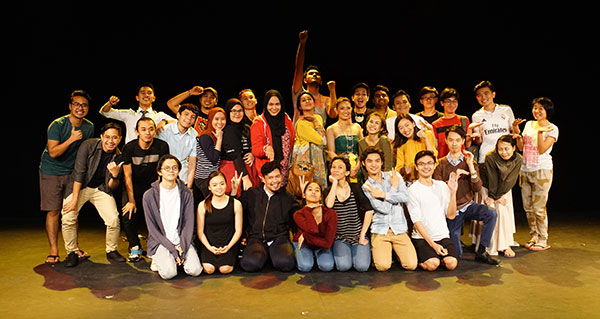 For an ensemble of seven seemingly different performances, one couldn’t help but notice the undeniable undercurrent of talent that flowed freely and unconsciously in the acts, transforming what would have been a mess of unrelated acts into one brilliant work of art. Ranging from contemporary dance sequences to revolutionary lighting arts, D’Next Artist Project Season 5 promised to bring to life seven fresh local creations, which they have more than successfully delivered. Regrettably, the session I had attended excluded one of the acts, ‘Pulsing Alpha’ by Raining Cassava, but nonetheless, I was enraptured throughout the two-hour showing.

Societal norms decreed and shackled us to responsibility even before our birth, and yet, ironically, humanity would be nothing if not for the dreamers. ‘Ratna Katrina’ had accurately depicted the age-old struggle between our loyalty to tradition or to ourselves with two women- Ratna and Katrina- who were caught in between their own happiness and their obligations. Set in both the modern-day world and the era of pre-independence, the play makes it clear that despite our new-spangled technology and increasing awareness, absolutely nothing has changed. A quote from the play that I found particularly moving was this: ‘You can be anything you want as long as it doesn’t interfere with everything’- which speaks volumes about the state of our society. Another highlight of the play was the ending – in which Ratna chose to take up her responsibilities, whereas Katrina decided to follow her dreams – and it sends out the message that the choice between dreams and responsibility is solely yours to make. Again and again I was amazed at the ability of the play to relate the troubles of a Javanese princess of the 16th century to an audience of Millennials, and how such a simple concept could have made such a meaningful play. However, there were parts when the ever-present monologue felt too long-winded, and parts when the plot seemed rushed along, but these were minor blemishes to the play as a whole. All in all, the play was beautifully acted out and an absolute delight to watch.

The next performance, in turn, rather miffed me and left a funny taste in my mouth. Perhaps the most intriguing part about ‘Sacha’, was the fact that there was virtually no hints as to what the dance will be about. With the exception of a cryptic description in the brochure stating ‘How do we look within ourselves? Sacha, a woman, a noun, a verb, an adverb.’, the dance was mostly left to the audience to interpret however they pleased. Featuring five talented women, Sacha gave off a ghostly aura with its scarce lighting and haunting music – a feeling that stuck with me for the whole duration of the dance. The dance sequence itself, on the other hand, was rather odd; it included rolling about, skirt-lifting, and had an all-around bizarre quality about it. The sense of anticipation builds as the dance progresses, because the audience hasn’t got a single notion as to what could possibly come next. There was also the general sense of detachment amongst the dancers, which was only exempt from the parts of the dance when the dancers looked at each other in the eye. Left to my own interpretations, Sacha could have represented just about anything from waking up from a deep-rooted illusion to the eternal struggle for true, complete freedom. Perhaps it would be wise to note that the name ‘Sacha’ also refers to the name of an organisation that supports victims of sexual abuse – although it might only be a mere coincidence. As a whole, I felt that the performance was mildly unpleasant to sit through, but was an overall fearless display of talent.

Perhaps the worst thing about bullying isn’t the fact that it’s commonplace, but rather, that it isn’t at all a taboo subject, which is absolutely ludicrous, because compared to other commonplace subjects, like sex, the LGBTQA+ community, and even racial differences, bullying would be dismissed as nothing of importance. This point was clearly demonstrated in “Mohd Firdaus bin Salehudin”, a play centered around the theme of bullying, and the effects it has on the victims. Throughout the duration of the play, Firdaus, once a bully victim, unravels his tale of woe to his friend, who continuously replied along the lines of “let it go”. It’s especially disheartening to think that society would react as Firdaus’ friend had to bullying, and not take action to nip violence in the bud. The play was tinged with humour and despite my laughing along to the jokes, I felt that the humorous quality might have taken away a greater impact that the play could have imprinted upon the audience. Besides that, as the play wore on, Firdaus’ reaction to being bullied seemed increasingly exaggerated, which agitated me, because empathising with Firdaus, instead of his friend, would have hit home the message that bullying is not acceptable. However, as a whole, I thought it retained the audience’s attention fairly well, and was an enjoyable play to watch.

Marriage. Practically speaking, there is nothing more to it than a legalised certificate to copulate. As relationships go, the logical next stage then would be to start a family together. It is said that all women feel the want to have children as they grow older, but if this next play is anything to go by, ‘Second Chances’ proves that generalisation wrong. Featuring a dysfunctional relationship between a couple, it takes the disappearance of their child for them both to finally communicate and come clean about their deepest regrets and misgivings about their relationship. A moral dilemma was presented to the audience- amidst the emotional conversation between husband and wife, their child was revealed to be the catalyst leading to the ruin of their marriage, and yet, as parents, they are expected to love the child. I loved how tactfully the play handled the communication- both physical and verbal- between the couple, amplifying the ability of both the actor’s and the actress’s uncanny ability to display raw emotions. However, for such an emotional play, I couldn’t help but feel that there were parts that felt slightly superficial- namely, towards the end of the play, when the couple had once again gone back to being romantic. Despite that, overall the play was a beautiful, touching piece and was thoroughly entertaining.

When life gives you lemons, it’s typically known that you would make lemonade; but if life doesn’t also give you sugar and water, your lemonade will taste horrible. It’s a universal truth that we don’t always get what we want, and that despite our best efforts, some aspects of our life is simply not up to us to decide. N O.W. HERE tells the audience a story that we are all familiar: The metaphorical crashing and burning of our world, and how to deal with the ashes left behind. The beginning of this dance sequence was sweet and quirky, but before long, the dance started to take on an oppressively somber tone. A single table was used as a prop for the duration of the dance – a seemingly questionable choice at first, but as the dance progressed, the choice was increasingly justified. I personally took the table as a symbol for happier times, which explains why one of the dancers would repeatedly try to go back to the table despite her companion’s efforts to drag her away. The dance brought into question just how far we are willing to go out of our comfort zone to get past hard times and who would willingly pick us up when we are broken and hurt – both of which are important questions to help us through life. Its ending is also a highlight where the dancer pokes her head through the frame of the table and looks about curiously, seemingly questioning the unknown future. Generally, I felt that there was a lack in emotion in one of the dancers, but both dancers were without doubt, very talented, and, everything considered, the dance was extremely satisfying to watch.

The last performance of the evening was ‘Percayalah, Aku Doktor’ (Translated as: Believe Me, I’m A Doctor). The humorous play featured an aspiring medical student who undertook an internship with a doctor who – throughout the play – diagnosed all her patients with made-up illnesses. The medical student, instead of correcting her, only kept silent, despite the fact that he knew the correct diagnosis for all the patients. A bold statement about youth, especially Malaysian youth, was then issued: We cling too tightly to our lecturers and their teachings, instead of voicing out our own opinions and standing up for our thoughts. Perhaps a factor playing into this outcome is our upbringing, perhaps another is that we are too afraid of making a fool out of ourselves, but regardless, it is undeniable that Malaysian youth, in general, is facing a major problem. However, I thought that this message could have been more impactful had the play not put so much emphasis on its jokes and gags. In the end, it only seemed that the play had undermined the importance of the message and that it was nothing more than a mere afterthought. That aside, I feel like the actors and actresses weren’t given much room to display their skills. The narrow range of emotion required for the play was unsatisfying, and none of the actors stood out for an especially outstanding performance. That said, I thought the play was able to retain the audience’s attention from the beginning till the ending, and that in general, the play was unexceptional, but entertaining.