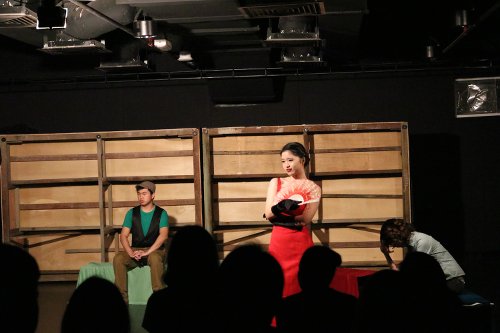 In itself, the play ‘No Exit’ is a creation of immense beauty- that is to say it sowed seeds of doubt where there was once blatant assuredness and ladled out dollops of absurdity with logic sprinkled on top. Written by philosopher Jean-Paul Sartre, ‘No Exit’ told a tale of three vastly different characters who find themselves escorted to a room in Hell, where they will remain for eternity. The beauty of the play lay in the fact that Hell isn’t simply a fiery inferno of torture chambers, but rather that Hell can be created by oneself and one’s wants. As the play progresses, one would realise that each of the characters has wants that couldn’t be fulfilled because of another character, which puts them in a state of never being able to gratify their wants. To their horror, they slowly realise that, through this very method, they were designed to be tortured and be the torturers of the other two. This play stemmed from one of Jean-Paul’s most notable ideas of all time- that ‘Hell is Other People’ and was widely praised when it made its debut.

From a member of the audience’s standpoint, I thought that the performance of the play was fairly well-done, being a simple student-produced event. There were three acts in the play, and each act was directed by a different director, with a different set of actors and actresses. Throughout the entire play, the audience can experience a variety of styles and see the characters portrayed in multiple ways, which was quite the refreshing and interesting experience. There were certainly more instances of near-perfection throughout all three acts than I care to count- it was a wonderful mesh of students’ abilities and talents, highlighted by the undercurrent of their enthusiasm. That is not to say, however, that the play could not have been better with a smattering of minor changes here and there.

Among the best qualities of the play, I will be discussing three that stood out the most to me. First of all was the astounding ability of the actors to act out such complex roles. It wasn’t so much the way they dressed or looked, but rather, the way they brought themselves- their body language, intonation and facial expressions- that the actors and actresses were able to breathe life into and perfectly embody the personalities of their characters. In one of the acts, Inez absolutely dripped with sarcasm and smarts, whereas Estelle could not possibly have been anything but a posh mademoiselle before her untimely death. The minimal use of props in the play is also a point I want to highlight, as it effectively accentuated the students’ acting and the play’s message at the same time. With the lack of props to divert the audience’s attention, the play relied almost entirely on the talent and directing of students to attract and hold the audience. The props included a measly three benches, a bell by the door, and a table with a silver bauble on top- hardly anything fancy, but sufficient enough for the students to act out the play without the need to resort to make-believe. Lastly, I loved how the combination between the direction and acting gave each act its individual style and flavour. The first act struck me as life-like, the second act had a blunt quality to it, and the third was simply dramatic. The unique tone of each act gave interesting insight to the play, as the audience is able to view it from three different perspectives and glean from each what they will. It’s interesting how unintentionally the play was laid out in various styles and left to the interpretation of the audience even as it had a decided conclusion to it.

Like everything else, the play had its highs, but also its lows. The play suffered the most at the hands of two main perpetrators- that is lack of cooperation between directors and acting that leaves room for desire. First off, the lack of cooperation between directors had contributed to various minor problems- such as the clunky flow between acts because of the need to move props around in preparation of each act. Besides that, inconsistency glared out at me when I realised that in Act One, the valet had specifically stated that there were no books in the room (hence rendering a paper knife in the room useless), but piles of books had appeared, seemingly out of nowhere, in the room during Act Three. Had the directors gotten together to read through the play together once, or talk about how the props should have been laid out from the very beginning, the transition between acts would have gone much more smoothly, and such inconsistency would not have happened. As for the acting, even though there were some stellar examples of acting shown by some of the actors and actresses, there was also some acting that could have been done better. For instance, the language used in the play had a general oldish feeling about it, which some actors/actresses were able to pull off the language flawlessly, but others made it feel stiff and stale- which, when put side by side, one couldn’t help but notice. Besides that, as there were no microphones or amplifiers on set, the actors/actresses had to be able to project their voice to the audience- a problem that was faced by one of the acts, when both Estella and Inez spoke too softly. As such, between the stiffness of actors/actresses and the softness of voices, it took me a second rerun of the play to fully understand what was going on.

All in all, ‘No Exit’ was performed to a satisfying degree, considering that it was put together with the effort of a team of students and nothing more. Personally, I thought the play was spectacular and well worth the audience’s time, despite the occasional blemish. It was indeed a unique experience- the play was more simplistic than a professional play, but of better quality than one would expect in a school play. It certainly exceeded my expectations and I hope to be able to attend more plays like this one in the near future.

‘Tai Hei’ 《大戏》
Writing Media Releases that Really Gets the Media to You. | 撰写能吸引媒体的新闻稿