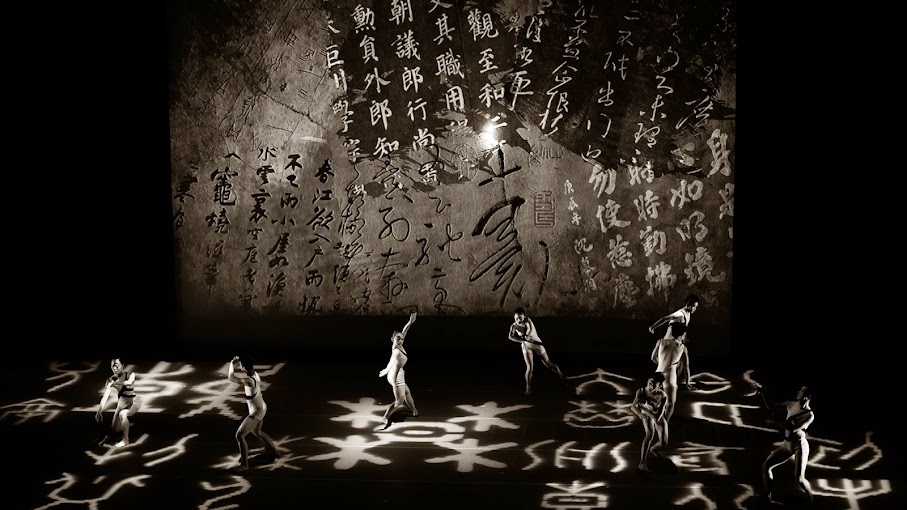 Malaysian-Chinese might be one of the peoples who take more effort in preserving Chinese culture than the Chinese themselves. I have heard this many times in Malaysia, as I travel inter-state. Some people feel that Chinese cultures are better preserved in some parts of Malaysia in another language, better than its original Chinese language. I do not have evidence to prove that, but what I can say is — judging from Malaysian dance company Dua Space’s performance of Ancient Inscriptions — the effort they devote in preserving these cultures is commendable.

Dua Space was established 16 years ago by dancer-choreographers Anthony Meh and Aman Yap 16 years ago. Since then, they have presented numerous shows in Malaysia. There are not that many professional dance companies in Malaysia — or aptly put, semi-professional ones — Dua Space is one of those who aspire to employ full-time dancers into their fold. With these professionally employed dancers, the company has travelled to many countries for performance tours, namely China, Korea, Japan, Hong Kong, Singapore, Taiwan, Pakistan and Indonesia, to name a few.

For those who are familiar with the Malaysian-Chinese dance scene in Malaysia, the aesthetics of Chinese dance in this country is heavily influenced by the developments in the dance scenes in Hong Kong and Taiwan. However this thesis is yet to be strongly justified. However, it is quite reasonable to come to this conclusion, for most of the dancers in the country have been trained in these two Chinese cities. Knowledge from the field also showed that many dancers have also had experience in dancing in different professional dance companies in these cities. For managing director and choreographer of Dua Space Anthony Meh, his professional experience in Cloudgate Dance Theatre (Taiwan) in the early years of his dance career has reference. Understandably, he has drawn influences from the philosophies of the Chinese dance company, or more specifically from artistic director of Cloudgate Dance Theatre Lin Hwai Min.

The passion to preserve Chinese culture is apparent. In order to educate and make sure that audiences understand how the different Chinese calligraphic forms came about and took shape, both the pre-show introduction and performance were programmed to go alongside each other, sharing with the audiences the nuances of Chinese culture and calligraphy in a systematic way. The performance was divided into different sections: the ancient Oracle-Bone Inscription （甲骨文）; Han Calligraphic forms of Regular Script （楷书）, Cursive Script （草书）, Running Script （行书）, to Wild Script （狂草）. Lastly, and probably the most significant, the introduction of Malaysian-Chinese calligrapher Sim Mow Yu’s（沈慕羽）work named Sim Script.

Images and impressions from Cloudgate Dance Theatre are apparent in the performance, for every watcher in Chinese contemporary dance in the Chinese speaking societies would be familiar with the dominant Chinese body-aesthetics founded by Lim Hwai Min. However this is not to say that Ancient Inscriptions is a replica of Cloudgate Dance Theatre’s repertoire, but a Malaysian-Chinese take on the existing culture aesthetics of Chinese culture. The principles of calligraphy involving lines and curves, groundedness and lightness of the brush-strokes, the intensity and control of ink, to name a few, are explored in the production. What’s remarkable is that the dancers have exhibited skills comparable to their counterparts in the Chinese cities. Such comparison might inherently be unfair, for the presumptuous bias against overseas Chinese not being able to perform better than the Chinese, or a natural assumption that privileges the Chinese people’s knowledge of Chinese culture, as compared to overseas Chinese continue to haunt and problematise the statement. Simply put, given the conditions in nurturing dance in these three cities, Malaysian-Chinese dancers have their going tougher than their counterparts in the other two cities, given the environment as well as the resources related to Chinese culture and studies are not readily available here in Malaysia.

Dancers in the Chinese cities train hard on a daily basis, full time. Malaysian-Chinese dancers have to work on different projects in addition to training for the full-time repertoires in their companies. Billing Ancient Inscriptions as a fund-raising event for Dua Space’s development is one clear example of such a challenge and dilemma in Malaysia. However, in the actual performance, their bodies could be compared to professional dancers in the Chinese cities. Every flow and curve are smooth and connected, practically like calligraphy on stage. Artistic director Aman Yap’s water-sleeve was a feather to their cap. Another gesture which shows their commitment to excavating local culture is to recognise and use local resources. Local material Rattan was being put to good use.

All of the above observations are not unfamiliar to dance performances around the world, but to use these resources effectively with the choreography to produce good dance material is key. Materiality in dance performances is not widely discussed, but it is a very important concept and consideration when we assess the texture and quality of Chinese dances (traditional or contemporary), for the richness, texture, nuances in the material of the final artistic product are elements that will move audiences to appreciating culture, especially one of their own. In Dua Space’s Ancient Inscriptions, the bodies have obtained a near achievement to be as one with Chinese calligraphy. Detailed description might take more than the word limit of this review.

Lastly the production design of the theatre piece has also greatly enhanced audience understanding of Chinese calligraphy, in relation to the bodies. Credit has to be accorded to Malaysian lighting designer Tan Eng Heng, as well as stage designer Goh Bak Chin.