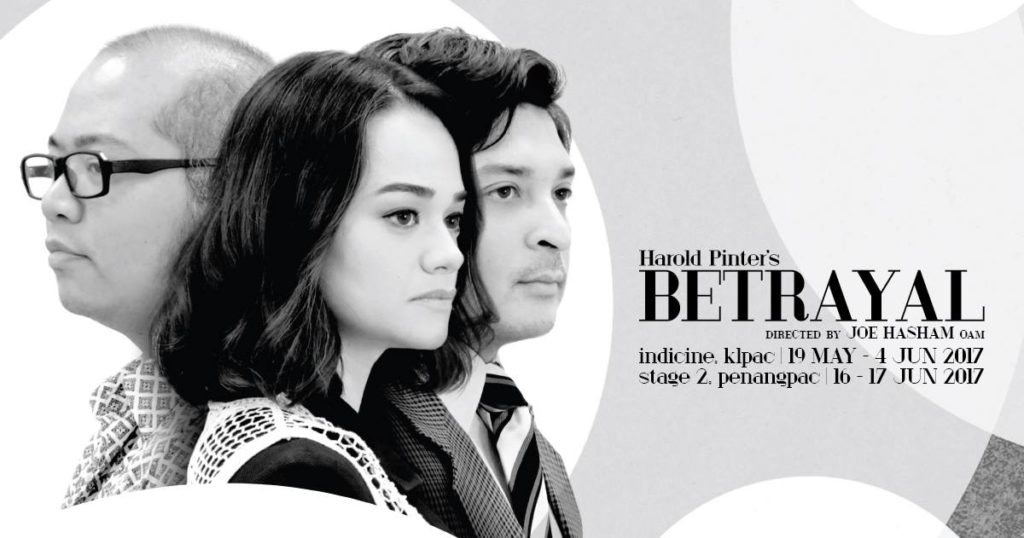 Betrayal is a play written by Harold Pinter in 1978. Having inspired by his own surrepstitiously scandalous extramarital affair with Joan Bakewell, Pinter beautifully illustrates the deceiving plot, accentuating the conniving behavior of Emma, who cheats on her husband Robert, with Jerry, Robert’s best friend. A complicated, tremulous and rather pathetic relationship filled with lies and mistrust and great betrayal. The ugly traits and quality of being human with self-absorbed one-upmanship, face-saving competitiveness, dishonesty, and self-deceptions were all greatly enhanced through his text.

Betrayal has been recognized as one of the greatest dramatic piece among the English theatre scene and has ultimately won the 1979 Laurence Olivier Award for Best New Play.

Malaysia will be seeing it’s first ever adapted Malay version of Betrayal, directed by the brilliant Joe Hasham OAM. Hasham will be taking on a challenge of his lifetime, directing Harold Pinter’s Betrayal, in both English and Bahasa Malaysia. Indeed, the Bahasa Malaysia version will definitely be a challenge for the award-winning director, as interesting as it is. The show will be performed separately on different night but performed by the same cast.

With a team of splendid and well versed actors – Stephanie Van Driesen, Omar Ali, Razif Hashim and Jad Hidhir, the play, without doubt will make headlines in the scene. With the rarity of having plays being performed in two separate languages these days, Betrayal is definitely something that would intrigue you. It is something to look out for.