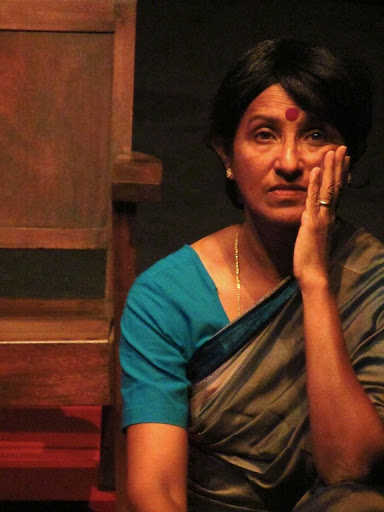 Women Battling to Culturally-Belong in Malaysia

– Director Chee Sek Thim let the characters run on their own.

… These productions were always directed by the late Datuk Krishen Jit, thus making the new staging of The Sandpit after 18 years by a different director, Chee Sek Thim, a highly anticipated event. (K.S. Maniam’s biography in the programme booklet)

The above line raised audience expectation. It might even induce unfair judgments on director Chee’s interpretation of K.S. Maniam’s play, especially the point of reference is none other than the renowned Malaysian theatre doyen Krishen Jit.

Perhaps, it was not the company’s intention to provide unnecessary pressure on Chee, but to reinforce the fact that K.S. Maniam’s text can withstand any director scalpel. After watching this afternoon’s performance run, as much as I am convinced that Maniam’s message in the play is adequately strong to withstand any form of overshadowing by the director’s artistic strategies, but I also believe that it is Chee’s intention not to do so. Every time when I write about theatre, I tend to gravitate towards the conflicts and fault-lines, and the paradoxes and puzzles in direction and execution of the lines of the play. In this production, there is not much to pick on, for the director’s choice to not “direct” the play, allowing for the text to shine forth, has allowed me to focus on actors’ rendition of Maniam’s lines. But to say that there was no direction is a misnomer. The beauty of Chee’s direction is that it seems right to be minimal, filled with fine touches essential to accentuate key messages. The stark stage design likened a minimalist abstract painting. It only consisted a ray of red light and a simple red round rug.

Any theatre with minimal direction is a challenge to actors. They can’t hide behind the direction, nor can they hide behind any grand conceptual narrative dictated by the director. They become the container, the vehicle, the content of the lines in the play. Penang-based actress Ho Sheau Fong and Anne James’ renditions of their characters were commendable. Ho Sheau Fong’s calculated performance hitting on the right notes in character work, and Anne James’ understated performance teasing out the conflicts of the first wife have made the play watchable, despite having to trudge through Maniam’s lengthy monologues.

As repeatedly stated in the wealth of literature written about the play in the past, Maniam’s intention to embody culture and identity in these characters physically is apparent. Both Santha (the first wife), played by Anne James, and Sumathi (the second), by Ho Sheau Fong are physical representations of Indian women in the Malaysian society responding to the plight of misfitting cultural belonging. Malaysian academic Susan Philip’s explanation is apt: “In Santha and Sumathi, he has embodied two contrasting views – the traditional woman who adheres to cultural norms and ideals imported from India, and the younger, more “modern” woman who seems eager to discard these values as being overly restrictive and irrelevant to her current situation.” (Philip 2009, 8).

Director Chee Sek Thim issued a challenge to the actors, with a greater one to Ho. Casting Chinese actor Ho to play the role of the second wife will unavoidably invoke racial politics — a topic I choose not to cover in this review, for I will have to write a longer essay to address the complexities within. However, within the Indian body, Ho has got her plate full. There are lots of emotional and spiritual conflicts to be excavated. Unfortunately, Ho’s performance of the character was carried out with a singular aesthetic: the typical “irreverent” woman revolting against the norm. As much as performance with precise calculations might be good in maintaining clarity in character exposition, but it might also be detrimental to the organic, living condition of the character, making audiences less convinced of her portrayal of the woman.

Perhaps, on hindsight, casting Ho to an Indian character might not be a wise choice, for culturally and spiritually, she is not ready to enter into the Indian cultural milieu in order to play Sumathi fully. However, on the other hand, casting a Chinese actor to play an Indian role might result in ground-breaking discoveries, especially in areas of reconciliation and integration between the 2 races. Either way, be it Indian actors playing Indian characters, or Chinese actors playing Indian characters, complex racial politics will haunt the play, both artistically and spiritually. Ho was alone, having to address these difficult questions and issues on her own on stage.

James, on the other hand, has successfully teased out the paradoxes and emotional conflicts within the Indian body. Her scene depicting her attempt to act like the second wife in making love to her husband was particularly moving. However, there weren’t any surprises. Her performance — though executed with finesse — did not adequately push the envelope in breaking the shackles of traditional Indian cultural practices.

Upon further reflection, director Chee’s conscious choice of casting Ho in the play contains – as what late Krishen Jit believed in — a strong belief: “…plural societies such as Malaysia and Singapore, and even certain parts of India, multiculturalism is in one body.” (quoted in Philip 2009, 2) However, it takes an experienced and consummate actor to navigate through these politics, achieving that common understanding. Chee’s conscious artistic strategy might be viewed as a form of directorial control on the bodies, should the actors fail to deliver his artistic intention.

Chee’s non-directorial approach has clearly refuted the possibility of any form of directorial control over the bodies on stage. Each character was allowed maximum space in telling their stories. He made a very conscious choice to augment the struggles of these women through 2 simple spatial devices: The narrow red threshold — which eventually became a door — was not only a form of constraint, it was also the beginning of emotional transcendence for Sumathi; the other, the red round rug represented Santha’s Sisyphean attempt in trying to free herself from a circular cell of cultural imprisonment. Both devices assisted the characters to become bigger on stage. Audiences were more attached to them, as a result.

Five Arts Centre’s presentation of The Sandpit: Womensis is necessary and important, for there aren’t that many presentations of text-based works in the Klang Valley, especially local works of literary significance. Krishen Jit’s passing has left a void in discourses relating to cultural development in this country. With this production, I am glad that K.S. Maniam’s text continues to be heard through different voices. Director Chee Sek Thim and actors Ho Sheau Fong and Anne James have given the play a new life, a new perspective to the plight of misfitting cultural belonging experienced by Malaysians.