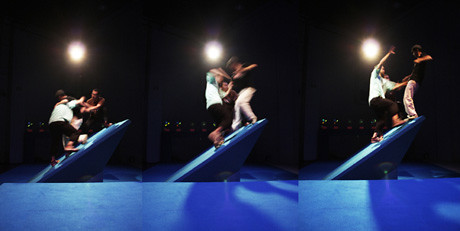 In viewing art, the first thing an audience would look out for is “the story”, or the narrative – in more generic terms. Contact Gonzo, the Japanese dance collective currently in rehearsals with Singapore company Theatreworks on upcoming performance Revolution-Per-Minute, just wants to go against that. Like many other experimental artists, they wish to explore other means of expressing themselves. To them a story is just not adequate. While this will make many dramatists and theatre-makers frown with disapproval – calling it “just another convenient post-modernist product” – it seems they have got quite an unique approach towards body movement, departing from contact improvisations.

Contact Gonzo continued their work when dancer Yuya Tsukahara invited Keigo Mikajiri and Itaru Kato to join the company after the leaving of the other founder of the group. Mostly they tried out new movements from dance contact improvisations in the park. They have since been performing in many different festivals. The name “Gonzo” was derived from the idea of Gonzo journalism created by late American rouge journalist Hunter S. Thomson, whose style of writing blurs distinctions between fiction and non-fiction. He is considered part of the the new journalistic literary movement of the same name in the 60s and 70s. Key characteristic of his work – which is also the main anchoring philosophy of Contact Gonzo – to break free from purely objective style of mainstream reportage. In a nutshell, Contact Gonzo strives to get “involved’ in movement by putting themselves right into the “moment”, be it on or off-stage.

To an audience member, it all gets a little blurry now. A question looms, “Is the story on stage real or not?” This is a struggle for artists and non-artists alike. For a non-artist (audience) the need to have a story/narrative to anchor down what they see on stage so as to inject meaning and make sense of it is of paramount importance, for human beings need control in order to appropriate the content for their own understanding. To an artist, whether what they are doing is real or not depends on the role of the artist in the artwork. For example, the director is usually the mid-wife, not the parent of the artwork, in creation; while an actor is directly involved in it. Perhaps, we are thinking too much. “It doesn’t matter. Like how one views pornography these days, we are not sure if we are the voyeur or a participant in the scene. For both involve imagination and characterisation while engaging in the act. Gonzo Pornography clearly has subverted the traditional way of presenting pornography, ranging from how the narrative is structured, to the camera, to the girl on the bed, ” said dancer Yuya Tsukahara. Role playing seems to be key to accessing this group’s art. Audiences should consider assuming roles while watching their theatre production.

Maybe we should use learn from the gamers, their abilities to get themselves involved in the games as players/characters/protagonists while watching others do the same fighting with their enemies. This could be a new way of watching theatre. As some artists might say: “Why is there a need to recreate realities on stage when you could see them every single day. Why not get into a fantasy with us on stage?”

This is precisely what theatre could further offer audiences with; its ability to involve the audiences into the performance as a participant in the events of the narrative, where powers of wild invention and rhetoric could take place. Through this, an audience member could also experience first hand, in that moment, the metaphoric elements created and experienced by the actors on stage, albeit in a seemingly confusing amalgam of facts and fiction, blurring the lines of the between one and the other.

We are unsure if the Theatreworks’ production of Revolution-Per-Minute (RPM) would be presented in this manner. But from the publicity literature provided, it seems so; in writer Robin Loon’s own words, “The guiding motif [of the writing] was debris -everything had to be written like debris strewn all over the road after a car crash – and the trauma of witnessing a car crash shattered the passer-by’s mind and it imploded into fragments. So everything is connected, but just all over the place. It’s a bit like a CSI with yellow tape but in writing form.” Audiences seem to get set to go on a CSI-like hunt to make discoveries, and to see what the characters/players are doing to each other in the production.

Discounts are available for group booking

For purchase and / or reservation of tickets

What is an Axis of Culture?
World-In-Theatre presents Precious Little: Brief Encounters with Beckett