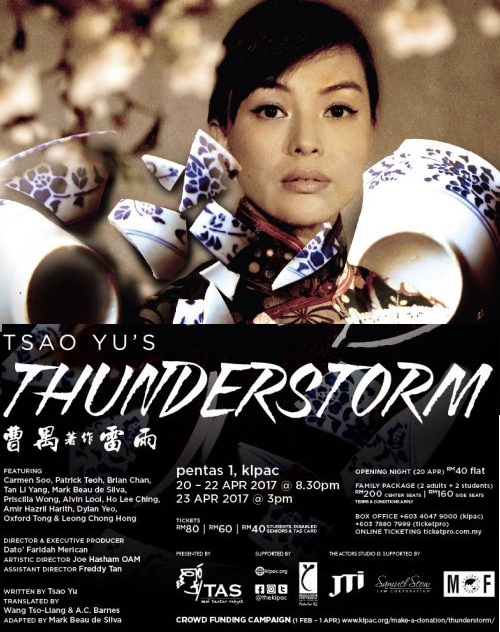 A movie can never encapsulate the immediacy of watching a drama unfold on a stage. If you do not pay attention, you could miss a piece of dialogue; and you listen, because missing a piece of dialogue is like missing a juicy bit of gossip. Anyone who has ever ‘tsktsked’ when hearing the neighbours argue, but turned down the TV volume so you can hear them better, will understand the uncommon thrill of learning something smutty about someone else.

Tsao Yu’s Thunderstorm as brought to the KLPAC stage by Dato’ Faridah Merican is the ultimate drama. Thrills, chills and gasps galore fired up the audience as the denouement spiraled to its frantic, frenetic and fantastical end. It plied the part of us that loves a good spectacle with love triangles and love squares and secret pasts and painful confrontations. You would feel an immense sense of satisfaction when you leave the theatre after the show. It began, it played out and it concluded into a nice little package that makes for a fun discussion between friends over a late night drink.

What more could you ask for from a show?

While the cast was a solid one and well-chosen for their roles, a few stand-out performances must be acknowledged.

Patrick Teoh as the manipulative and domineering patriarch was so effective. He was the epitome of a petty pseudo-monarch intoning demands and yelling commands. The imperiousness with which he did so could have been funny but the utter certainty with which he expected that he would be obeyed made it seem natural that his grown sons would fall to their knees simply because he said to do so.

You hated him on behalf of his family, but you also did not want him to leave the stage because he was so magnetic to watch. A five star performance by Patrick Teoh.

Carmen Soo’s Fanyi is another example of an actor truly understanding her character. Soo’s portrayal was so true to kind and realistic. In Fanyi, one could recognise a thousand other women just like her, dissatisfied with their lot in life, blaming their bad choices on everyone around them. Her ineffective attempts to use her feminine wiles and the childish tantrums she threw when she didn’t get her way were done so well, you did not pause to think that you were watching an actress do a role. You just thought, “not again Fanyi, have some pride”.

Comic relief for the play and deserving a special mention as well is Mark Beau de Silva’s Lu Gui. De Silva was so effortlessly funny, even when he encountered a bit of a technical issue with his mic, he did not break character and carried through without missing a beat, making sure his lines were heard. He was easily the most likable character on stage despite playing a vulgar, grubby little ass-kisser.

Last I checked, the shows are mostly sold out, but if there is the chance of a seat even in the nosebleed section, I encourage you to go watch this highly enjoyable melodrama which has withstood the test of time. Kudos to director Faridah Merican, perhaps her experience in having acted in the drama is what helped her direct the play to be so well-received in this day. What ever the reason, she has once again proven why she is the First Lady of Malaysian theatre.