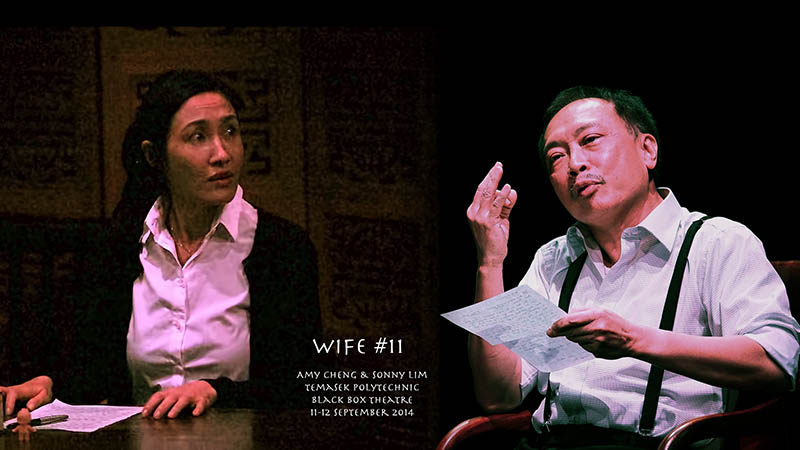 A Review by Jasvinder Kaur Pannu

At one end of the wide runway stage is a black platform, housing a single armchair, a large thermos flask, and a packed suitcase, demarcating the space of the itinerant businessman Ah Huat. On the opposite end is a room, marked out by a simple rug, that contains a settee, a sewing machine, and a writing desk, with a carved wooden screen standing in the background, demarcating the domestic space of his tenth wife Theresa. All the furniture is wooden and modest, providing solid visual anchors on either side of the bare space that is center stage.

We gain entry into the play’s narrative with Ah Huat (Sonny Lim) seen in a spotlight at center stage. He spins in a circle, so slowly his motion is almost imperceptible, as he reads us a letter. We later learn that this letter is chronologically the last in the exchange we are about to witness. Lim’s controlled movements seem to emphasize the careful rewinding of time as Ah Huat encourages the recipient of his letter, and us the audience, to “take the whole journey again with [him]”. This opening scene sets Ah Huat up as a nucleus to the story, his voice sending us back to the start of the tale where the epistolary form of this play comes to life with the entire exchange of letters taking place over the course of 16 years between Ah Huat and Theresa (Amy Cheng).

When Ah Huat returns to his raised platform, to lounge in his armchair, we are then introduced to Theresa. The return to individual spaces divided by the unlit void between the two set spaces serves to emphasize just how much of an individual Theresa is at the chronological start of their correspondence. She opens with “I am writing to tell you that I am not happy”, leaving no room to doubt her opinionated and assertive nature. Yet she carries a cautious hopefulness about reaching a compromise between them through communication. When Ah Huat tells her, “You’re the first educated one (I married)”, he offers a better understanding of just how important these letters will be in building their relationship. So the epistolary form that the play employs attempts to textually bridge their physical and emotional distance.

Lim and Cheng are outstanding in their reactions to each other. With such a spatial divide between them, their attentiveness to each other’s words and actions produce wonderful moments of reactionary connection. When Theresa falls ill, Ah Huat sits hunched at the edge of his seat with a package of herbs in his hand. We see Theresa sipping the tonic from an aluminum cup as she reads the letter that Ah Huat is yet to send along with the package.

In these moments of phenomenological traveling, it appears that the life of their relationship has been pressed and preserved in the folds of the letters they are sending back and forth. With each exchange, the empty space between Ah Huat and Theresa grows more charged, the two individuals emotionally orbiting each other but never quite meeting long enough to keep pace.

That vast space at center stage draws both bodies on stage closer over the course of the performance. Though the connection is between letters and not bodies, there are captivating moments of materiality where directorial and artistic choices disrupt the play of words. Amy as Theresa, especially, has two inspired moments. The first is when she receives Ah Huat’s letter informing her of an imminent wife #11, where she drops her aluminum cup with a sharp clang; the second is when she writes a letter that she angrily balls up and physically throws across the performance space. It lies there at center stage, a stark white reminder of a letter she never sent and that physically failed to reach Ah Huat.

Although both characters are greatly involved in textual representation, there is a gradual shift in style over time, as the characters become a more seasoned married couple. Less needs to be said outside the body of the letters, and both Ah Huat and Theresa write and read knowing there’s nothing to hide.

In the final scene, Ah Huat is at Theresa’s desk, in her homely set space, when he reads the final letter from his Wife #10 who is now in jail. He is in a thin white t-shirt and pajama-pants, a big contrast with the formal clothes he has been wearing for most of the play. We see him looking small and remorseful as he reads his last letter to Theresa, which is in fact that very first letter that the audience heard. Textually the loop has simply been closed, while emotionally the audience has been taken on an entire journey.

In this final letter, Ah Huat has bundled together all their letters to send to Theresa. The letters all meet even though the characters never do in the end. Ah Huat and Theresa’s hands reach out towards each other in the spot light at center stage, captured in a moment of approaching but not reaching. It is only when Lim and Cheng continue to hold hands for their curtain call that we are finally pulled back out into our reality.

Wife #11 is a captivating story that has the ability to draw viewers like me in, too young to personally know the experience of communication through snail mail yet still old enough to have experienced it to a degree. I found myself thinking of the letters I keep of my parents’ correspondence from 1987. I wondered what part of their life had been preserved like pressed flowers in those yellowed envelopes. As much as the play had asked questions of communication and of self-fashioning through writing, it also dealt with questions of physical spaces of ‘house’ and emotional spaces of ‘home’. As a friend of mine put it, it’s a play that tells the Singapore story by just telling one Singapore story.