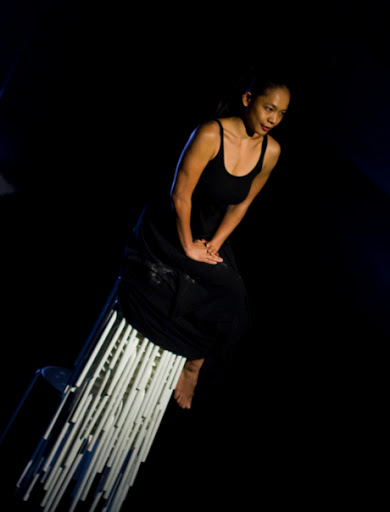 by Ho Rui An

The absence of a functional and sustainable critical discourse is probably one of the key deficiencies of our local arts ecology. The problem is magnified when we narrow our parameters to consider discourses on dance – a discipline which often appears even more esoteric than the visual arts in the public imagination. This is why the Graey Festival, initiated by Raka Maitra in 2007 and now in its third edition, represents something precious not only for dancers but for all cultural workers working within the field of the contemporary.

A week-long event, the festival includes performances by local and regional dance and theatre practitioners as well as open rehearsals and a forum on the last day. Its theme for this year, “Vivisection” offers a provocative metaphor when applied to dance, since the idea of dance is inseparable from the human body. I’m also unable to shake off a mental association to the human vivisection experiments of the Second World War: as morbid as it may seem, a vivisection constitutes violence at its core. It is not just an incision or dissection, but an act of thoroughly turning a body inside-out to reveal its internal structures. In the context of a contemporary dance festival investigating the constructions of “asianess” in a postcolonial world, this violence appears to be a counteractive move against the epistemic violence of a once dominant West. What can we discover when we cut through the body of dance which has been, until recently, wholly constituted by the trans-Atlantic hegamony of Europe and America? What is to be found beneath the throbbing flesh?

It is this promise of a postcolonial inquiry of dance in the region which excited me the most but this strand of ideas was unfortunately glossed over during the festival’s proceedings. The discussions were perhaps also not as wide-ranging as anticipated and often delved more into individual practices and methodologies. While there were visible attempts at discussing the works (or dance in Asia as a whole) via a socio-cultural or dance-historical perspective, I was hoping that even more angles were taken – such as looking at dance in Asia via anthropological or postcolonial lenses perhaps? Or am I expecting a little too much from a festival which is already covering more ground than it realistically can? Or is this just a quibble coming from someone with little formal experience with dance and bent on approaching the festival from a primarily performance/cultural studies viewpoint?

Whatever the case, it is clear that the discourse generated by the festival is its most cherished and thus also its most wanting element. The performances, most of which were collaborative works created during the span of the festival, were expectedly raw, abstruse and consequently inadequate as purveyors of meaning or stimuli for discussion. The real gems are the open rehearsals, which I unfortunately could only attend a portion of. But of those I attended, the level of insight they provided into each performer’s practice was incredible. This was what I had hoped the forum could have built up on, using these individual practices as material for discussing dance against larger landscapes, but perhaps due to the limited time and small audience, the discussion never quite reached a satisfactory breadth or depth. That said, there were definitely certain key ideas which recurred throughout the week, among them, the use of improvisation. Specifically, what stirred me is the suggestion that improvisation offers a state in which the dancer can simultaneously reside in the worlds of the classical and the contemporary.

Improvisation and the Paradox of the Classical-Contemporary

I’ve often expressed skepticism towards works, within or outside dance, which claim to fuse the classical and the contemporary, because insofar as definitions are concerned, the two are fundamentally antithetical to each other. Technically, a fusion is possible if we are considering the visible aspects of a performance. We can fill its mise-en-scene with trinkets of Oriental artifacts, Cunningham-inspired multimedia projections of calligraphic scriptures and movements which incorporate classical poses with Contact Improvisation or some other postmodern form. But here, perhaps the more appropriate words are amalgamation, assemblage or pastiche, which can be used to describe a convergence of the observable traits or the “physiognomy” of two different fields. A fusion, in contrast, points to a complete symbiotic union of the two entities – a communion of spirits. The composition of a work can be a sum of disparate or even contradictory parts, but its fundamental spirit, disposition and character is unitary. In this light, how is it remotely possible for a work to not only look, but be both classical and contemporary?

The classical is a construction which seeks consolidation. Most classical dance forms today such as Bharata Natyam or Khmer Classical Dance are largely officialised reconstructions based on surviving fragments of the past. They are completed systems to be faithfully repeated and reinforced. In contrast, the contemporary, by its very nature, is nascent. The contemporary object is that which has surfaced to the realm of experience but has yet to be concretised as knowledge. It exists in a field of uncertainty, in which any stability, if sought, is perpetually deferred to a yet-to-be-realised future. It is unsure of itself and thus always an unfinished, or aborted construction.

But the discussions on improvisation at the festival have led me to readjust my positions. Surely, there’s nothing new about the use of improvisation in dance; what is significant, however, is its ability to bring the body to a certain threshold between knowledge and experience, memory and fantasy and in this instance, the classical and the contemporary. Tripura Kashyap, one of the classically trained Indian dancers in attendance at the festival, mentioned that her works are about her attempting to break through the mould of her classically-trained body. Despite her transition to contemporary dance, it seems to her that the language of the classical has been permanently lodged into her body, assimilated into her identity as a dancer.

Given that the body with its repository of memories is the point of departure for any form of improvisation, the act gains an especial significance when attempted by a body which has already been accustomed to a particular vocabulary. When a classically trained dancer improvises, the “classical” memories of the body are activated but not carried to its natural consummation; instead, the impetus is harnessed to catapult the dancer into an indeterminate future, an open field of uncertainty, in other words, the province of the contemporary. A genuine fusion is realised: the classical body is taken into the now while still holding on to its ties to tradition, consciously or unconsciously desiring both return and release. At the forum, Singaporean critic and educator T. Sasitharan succinctly described improvisation as a paradox, quoting artist Zai Kuning who once called it a state in which “you don’t know what to do next but know what to do”. This inherent paradox allows the improvisational state to accommodate the other paradox of the classical-contemporary.

Another thread of ideas which I wish had been pursued further concern the problematics of reading dance across cultures. This issue was raised at the forum in reference to Pichet Klunchun Dance Company’s performance of Jab Nang during the festival. There were two starting points which motivated the creation of the piece: the first being a highly popular Khon classical dance piece, from which the performance takes its title from, which enacts the sequence in the Ramakien during which Hanuman pursues Nang Benjakai, and the second being the sexual abuse and violence towards women in modern day Thailand. Pichet Klunchun, the choreographer, had intended to subvert the original classical dance – usually staged as a convivial courting game between the monkey and his maiden – by foregrounding the undercurrent of violence in the episode.

Some individuals who watched the performance found Pichet’s choreography to be wholly uninspired, seeing it as yet another dance about the contestations of power between the masculine and the feminine. The dancers, who were present at the forum, however, suggested that the provocative nature of the work could have been lost with the re-situating of its performance site to Singapore, adding that if performed in Bangkok, such a subversion of a famous classical dance would incite the greatest reactions.

This compounds the established fact that the severance of the cultural context from any piece of art has severe implications. In the case of dance, it leads to the work’s literal disembodiment since the body, the carrier of cultural identity, is central to the work. An acultural reading would reduce a work to pure spectacle and its motifs to flat expressions of generalised states of experience: leaping connotes flight, contraction connotes grief, prostration connotes supplication… But at the same time, how possible is it for a viewer to get at the essence of a work from a culture that is not one’s own, however informed one may be?

As it seems, there are irresolvable tensions surrounding the cross-cultural reading of these so-called “ethnic dance forms” (a designation which is itself problematised by Kealiinohomoku’s proclamation that all dances, including ballet, are ethnic forms). How much contextual knowledge should we, can we and/or must we amass for us to adequately engage with a work? To what extent can a purely kinaesthetic appreciation suffice? Conversely, how thick must the cultural lenses through which we perceive dance be before the work becomes simplified into an anthropological specimen? As much as no clear answers can be derived, these are questions which must be addressed by both critics and practitioners alike.

But as with every conundrum, there exists both resistance and possibility. The former must not be shunned while the latter needs to be constantly sustained, expanded and cultivated. If the level of discursive potential at this year’s festival is any indication, this is a mission which future editions of the Graey Festival are clearly capable of undertaking.

An Evening With 3 Singapore Dance Companies | 3 from Singapore, Contact 2010
Graey Festival 2010 | A Review