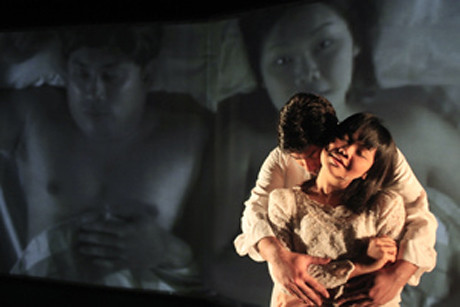 Frozen Angels – a play by The Necessary Stage for M1 Fringe 2009 – is all about imaginations. I am not referring to the common understanding of the act of imagination as a form of “make believe” in play – although that serves as the bedrock for all artistic creations – I am specifically referring to imaginations in discovering life. To be specific, they are what a director sees through the eyes of humanity, what a designer sees through the eyes of metaphors, what actors see through the eyes of the characters. From playwright Haresh Sharma to director Alvin Tan to multimedia designer Loo Zihan to Actors Siti Khalijah and Najib Soiman, imaginations soar as they keep to their tasks of excavating the materials at hand: Stem Cells, Artificial Intelligence, Human Life and Relationships, and Love.

From the very beginning, the actors imagined what was like to have a mother going into epilepsy fits in random moments and what was like to helplessly obey rules of the state at the expense of culture and religion. The process went on with Siti Kahlijah and Najib Soiman paying attention to what the various characters see while playing them to great aplomb. That was great acting in action. It was intensely satisfying to see the energy they have unleashed upon the audience. It was strong, for a girl sitting in front of me sobbed right after Siti Kahlijah’s last line in her opening monologue.

It is difficult to pre-empt the ending when a play has such strong opening sequence. The audience has been put on the right path, on a journey the creators went through before us in their quest for truths in preserving humanity. Frozen Angels was indeed a difficult journey the audience had to take. They were forced to question human desires we took for granted, most of the time referred to as acts of human nature, through the exposure of these raw desires on the stage; from college student’s wish for marriage to a widower’s fight with loneliness to a Chinese woman’s quest in preserving her mother’s life.

Each and every character – through the actors – has a quest of his/her own. The playwright, director and the designer, too, have their own quests in making sense of the topics. The result of their effort – the production – extends an invitation to audience members to join in the search – within themselves – for personal truths to these topics. What makes the production strong and heart-felt was the amount of humanistic love the creative team has given to the project by not making judgements and opinions to the materials discovered. Alvin and Haresh merely organised these materials and presented them artistically – in the best way possible – on stage, with a master sleight of hand in story-telling.

Great imaginations also took place in the visuals designed by Loo Zihan. One of them was the intricate use of lace against a human figure on the screen. The designs set many questions in motion. One of them: What’s the difference between the imaginary and reality? This idea, in fact, has great resonance in the production; from who the characters are to the validity of life through stem cell research and usage.

I totally agree with playwright Haresh Sharma’s words during the talk-back after the performance last Friday: words can lose its function sometimes. That’s the time for images to take over. Images, in all its different metaphorical manifestation, are what we see in every single moment in living out our lives. Frozen Angels did just that – allowing us to discover life through our own imaginations.