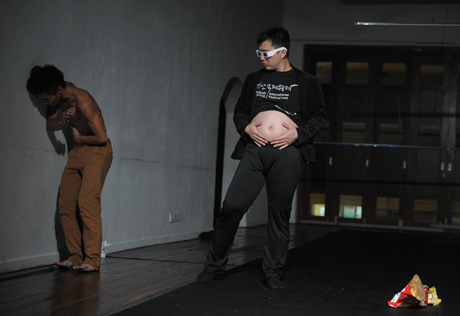 How Does Happiness Look Like, or is it Relevant at all? – A Review of Malaysian Choreographer/Dancer Lu Wit Chin’s Memento Mori

Both visuals by James Quah

“Yes, death. Death must be so beautiful. To lie in the soft brown earth, with the grasses waving above one’s head, and listen to silence. To have no yesterday, and no to-morrow. To forget time, to forget life, to be at peace. You can help me. You can open for me the portals of death’s house, for love is always with you, and love is stronger than death is.”

To some members in the audience of Malaysian dancer Lu Wit Chin’s solo performance Memento Mori at the opening night, the energy brought forth by the work seemed bleak and dark. Implicitly, they preferred more happier elements to be added to the piece. The inclination to privilege the Happy is understandable, however answering the question: How does happiness look like, or what form does it take, or is it relevant at all? – is more compelling, something I am keenly interested in conversing, with the work. If choreographer and dancer Lu were to keep staying positive — in a mundane sort of way — then the happiness he brought forth in the work might be more oppressive to him and the audience, or maybe more comforting to the audiences rather than to himself — nobody knows, myself included.

To engage in this debate on “Happiness” is not what this piece of writing is purposed. However, in parallel, this questioning of happiness reminds me of the fervent conversations between proponents of evolution and creation — whether there was a design before the universe began, and other positions. Neither am I going to delve into discussions on this debate here. To me, what’s beautiful in these debates is the determination held by both camps on discussing about the unknown, the imaginary — more aptly and optimistically put: the wonders of the unknown. Theatre is probably the best, and the most neutral place where understanding the wonders of the unknown can take place. Lu and his team of designers (Set and costume designer Jan Wong, lighting designer Zoe Cheung, and PR and multimedia design Okui Lala) have taken the exhibition space Annexe Gallery, in the heart of Kuala Lumpur, Malaysia, into their own hands and — in a rather Darwinian approach — created a piece of theatre that celebrates human being’s inadequacies and foibles, which scientifically proven to have resulted from the incomplete and flawed evolution of our species. Along the same vein, however, in an attempt to make things better — likens the process of Darwin’s natural selection in a non-random way — Lu has deliberately placed his elements in his choreography within a structure that attempts to tell a good story. Unfortunately, in different points in time, the narrative has constantly ruptured due to complications in his personal sentiments towards the elements in his choreography — mostly the melancholic ones. Ageing by the years, progressing through life deliberately without a clear direction, fearing the loss of what one’s assets in the future – these human foilbles complicate matters. However, these complications exposed the workings of the dance piece’s inner natural selection process, where working towards the better, non-randomly selecting the elements to make accepting these challenges easier, or in a Darwinian sense: more effective.

To start off the piece, former dancer of renowned dance company in Hong Kong, City Contemporary Dance Company (CCDC), Chan Yijing gives a strong opening image to the narrative. His body exhibits gravitas in portraying the quietness and stillness of the elder version of the protagonist, while Lu converses with him as his younger self. In various points in time, under the context of living in a dream, Lu has created a tapestry of non-related elements that are humanly possible for one to imagine. Disparate as they are, the cavorts, the monologues on how a typical Malaysian Ayam Kumpung (Kampong Chicken) looks like; the long extended dance routines that stretch the body against time and space; the interactive session with audience members asking them to read out his thoughts in the dream; the beautiful scene that recollected his memories on his travels, these elements culminate in the final scene of hope and redemption in a form of a light spectacle, albeit with a rather religious tinge. 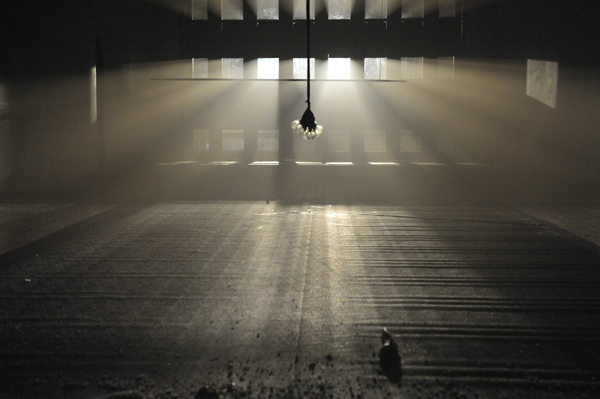 The spectacle is a paradox that requires unpacking, for within the religious spectacle lies the imaginary, within the theatre. Theatre and religion share the same strand of creative corollary. For both of them extensively use metaphors and allegories to illustrate a point, or to make connections with the metaphysical world. Drawing on the largely Darwinian approach of natural selection in appreciating this dance piece might not be apt, but if mediated through Richard Dawkin’s (1) rather uplifting spirit (in appreciating the wonders of how life evolves in the non-random selection of the random interactions of particles) makes the point of departure in imagining and understanding the unknown, or the emotional upheavals experienced by human beings in life, more plausible, more real, and for a lack of a suitable term — more empirical.

Hence, through that lens, one could appreciate the workings of the choreographer, the lighting designer and the set designer even more. Set designer Jan Wong’s sensitivity to the architectural design and set-up of the Malaysian exhibition space allowed all the various designs — or mis-designs — of the gallery to take on a new life; an example of such was the transformation of the seemingly boring gallery door into a window of life through the strategic placement of the lights inside and outside of the space, where the trajectory of light projection performed by lighting designer Zoe Cheung worked in cadence with the music, choreography and set placement of the properties required by the work. The choice of materials was also apt; one of which was the choice of salt to represent the falling snow, coupled with its aural quality of the falling rain. These empirical evidences of the effects these material properties provided gave the artists confidence in creating their form of the imaginary in Memento Mori.

Returning to the first question I have set out to answer: How does happiness look like, or what form does it take? Without answering the part on relevancy, I am afraid the answer might be rather bleak: like all empiricists’: The mind has no inborn intellectual content or structure, encodes information and thinks via images gained from experience, with language serving both as a collection of signifiers of images and a mechanism by which to quickly and efficiently recall them for the purposes of thinking (Locke 1975, 43-105 & 402-408; Hobbes 1968, 100-110)(2). Simply put, to all of us, happiness has no form; or, happiness does not exist at all.

The second part of the question aptly applies: Is it relevant to discuss how happiness looks like then?

By disregarding the first part of the question as irrelevant, we could then form our own conclusions:

To those who wish for more happy elements in Lu’s work, you might be asking choreographer Lu to go against his personal wishes and intention in telling his own story in the most honest and truthful way of his own. That might be a tad too oppressive. Or, considering another way to look at it — in a rather liberating way — I would encourage them to fill their understanding of the work with images created by Lu and his team. Like a voyeur, we look into his inner life — likens peeping into a key-hole in one’s bedroom — into his personal trappings, into his private relationship with himself.

(1) “Richard Dawkins, DSc, FRS: One of the most respected scientists in the world and the biggest draw in secularism, Richard Dawkins always generates impressive crowds when visiting North America. On his Fall 2011 tour he drew an enthusiastic crowd of 2300 at Eastern Kentucky University. This is a movement, and Richard Dawkins is the catalyst that galvanizes it.” 2012. Accessed December 1, 2012. Richard Dawkins Foundation of Reason and Science. http://richarddawkins.net/home/about#.ULrUsYPqmSr