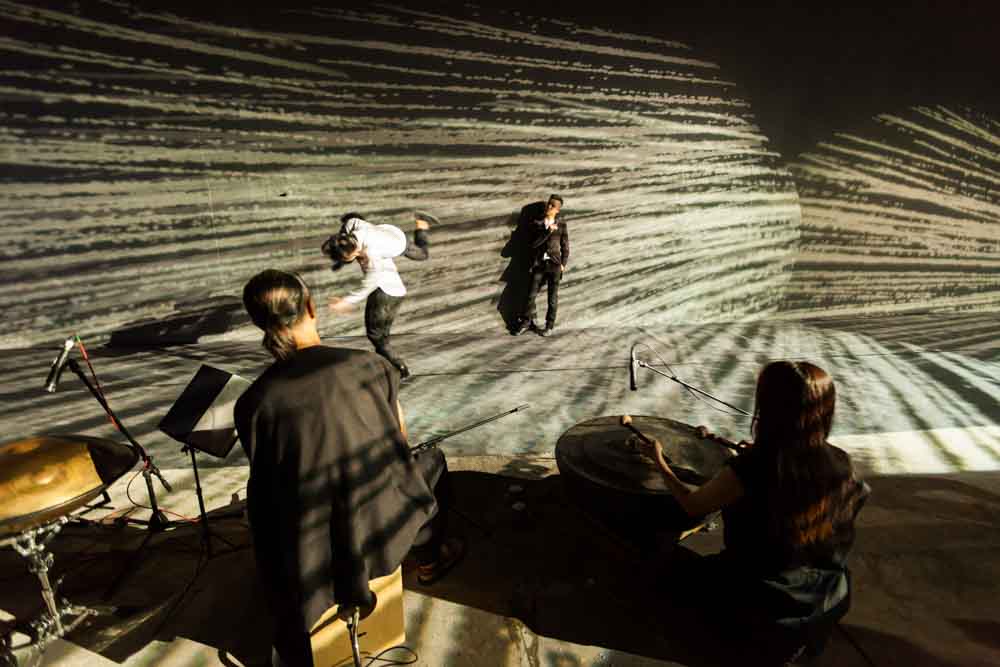 Site Specific Performances – Is there anything specific about the events – Hands Percussion’s Opium, as part of DPAC Arts Festival 2016

As part of Damansara Performing Arts Centre’s (DPAC) annual arts festival, HANDS Percussion’s collection of events collectively named Opium has decided to use the alternative spaces in the establishment to present a series of music performances with a tinge of artistic expression. There were four sections: Tunnel of Memories, Fake Freedom, Drumbeat of Pain, and The Finale. Each performance is presented to free-standing audiences in a proscenium stage format. Novelty seems to be main selling point in this collection of events. According to the programme booklet, the events reflect the artistic expressions of Malaysian and French artists. The artistic director of the event is Bernard Goh.

The epilogue showcased the music of cellist, Florian Antier; accordionist, Mohd Azli Bin Taslim; and vocalist, Mathilde Limal, with the ensemble from the second company of HANDS Percussion. It was a concert with dance accompaniment supported by drummers. As much as attempts were made to provide a deeper meaning to the piece through painter Ong Chia Koon’s artistic intervention by drawing body art onto the drummers, the signs had no connection with the theme of the piece: Pain and sadness. Physically, the drummers had difficulties expressing different registers of pain and sorrow, only limiting themselves to facial expression of pain and self-flagellation. The use of sign language was not well connected to the theme, especially with the performance style Mathilde Limal chose to perform.

Fake Freedom was the weakest link among all the performances, for there was a deliberate attempt to choreograph contemporary dance/movement with non-dancers. Choreographing a natural body is akin to oppressing the moving body. All bodies on stage were artificially manufactured. I was told that these bodies were not dancing on stage. They merely moved on stage using the body-mind (the cerebral), not from the heart (the visceral). It was apparent, for the live performers were not breathing enough. Breath is the best indicator of life. The performers were moving, but they were not living. This state of existing in the waking dream could be observed in the body of the female performer, Tee Wee Lin. Rather than moving in a manner that honestly reflects the character, she was asked to perform in a misguided aesthetic reminiscent of Hong Kong filmmaker, Wong Kar Wai’s In the Mood for Love. With the male and female co-existing with each other, both exhibiting fake affections for each other, being fake has become a cliché. Faking oneself is a human’s basic body-mind reflex. It is a form of mental and physical protection away from harm. Faking oneself is a human’s natural reflex. In this context, fake freedom is one’s own perceived freedom in the context of hiding oneself from the world. The near-naked body of Leong Kah Miu portraying Greek statues Discobolos (The Disc Thrower) to Augeste Rodin’s The Thinker would not be literally lifeless and fake. I was embarrassed for him while watching him perform. As non-actors, Tai Chun Wai, Jack Wan and Tee Leong Hoe did a competent job executing their moves. Naturalistic as they are, the direction was unclear. They had no clear intention and conviction in what they were doing.

In Drumbeat of Pain, two drummers, Chang Yih Feng and Karen Hii performed to the rhythm of calligrapher Ong Chia Koon, while pianist, Yuan Leow Yunn and guitarist, Gideon Alu8khan Chen improvised and performed whilst artistic director, Bernard Goh serenades a Chinese and French number to the same name of the segment the Tunnel of Memories.

Collectively, the performance events are referred to as site-specific performances. In artistic director Bernard Goh’s words, he attempted to re-create the delightful adventure he had experienced while walking the streets of Paris. All events – with the exception of Fake Freedom – have fulfilled Goh’s artistic vision; however all events have glossed over an important aspect of site-specific performances: The connection among the history, time and space specific to the site in which the work takes place. Goh’s memory could be further framed within the context of history of Malaysia, his home country, in relation to the specific site in France, for instance. That would provide a clearer reference point for in-depth study. In addition, the aesthetics produced by the texture of the site could either contribute or undermine the performance. For example, in Fake Freedom, the use of a near-naked body of no texture could hardly blend with the metallic, industrial-like tone of the performance space. Similarly, the replication of Wong Kar Wai-like aesthetics does not work very well with the performance space covered simply with white canvas and nothing else.

Musically, Florian Antier on cello, Mathilde Limal on vocals, Yuan Leow Yunn on piano, Gideon Alu8khan Chen on guitar, Howz on Zhong ruan (a Chinese musical instrument) and Mohd Azli Bin Taslim on accordion, alongside the percussionists from HANDS Percussion, are adept in music improvisation. All of them produced an excellent concert making the evening wonderfully enjoyable to music lovers. In the spirit of Edith Piaf’s classic Non, je ne regrette rien (No. I regret nothing), the musicians enjoyed themselves regretting nothing, leaving art writers wondering if the events could be a form of art, or simply just entertainment, which works just fine.