Streetwalkers by Action Theatre | A Review 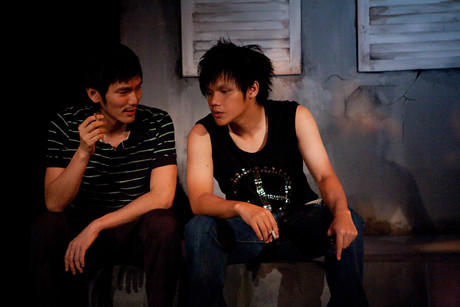 Action Theatre’s latest theatrical offering Streetwalkers made me realised that no matter how important dramatic structure is in a play, it is still after all just the building block of an art-work. What makes the play work, moves people, getting people to remember it for a long time to come is none other than the story, the characters, the situation they are in. In addition, how the language of play is structured, as a form of spoken literature, for metaphorical and allegorical references allowing people to imagine and look beyond the play. The question looms: should a dramatic structure be different and innovative, allowing the narrative (the story) to take on a more interesting path, in order for the play to be classified as a good play, or should it just be plain good story-telling, focusing on character journeys, the plot points?

Yak Aik-Wee’s script has a simple dramatic structure. Man meets boy, befriends boy, meets his ex-boyfriend, ex-boyfriend trying to patch up, sees his ex’s new “boy” friend, favours the boy and conflict between them develops. All of these seem to be rather simple and straight forward, but the performance of the actors simply made the play a moving experience for this writer. Conan Choong, a relatively new-comer to the theatre scene, gave credible performance as a boy who came between two gay men in their journeys in trying to resolve issues in their lives; Gerald, in trying to suppress his sexuality, while Gilbert, trying to keep his “youth-ful-ness”. David Leong, as Gerald, keeps the trajectory of the repressed man tightly to his chest, while theatre veteran Lim Siauw Chong – gradually as he moves from the start to the mid-point of the script – shone right at the end of the play with a show-down with character Gerald, trying to make him come to terms to his self-delusion. The story — nothing new, almost to what we see every single day around us, be it colleagues or friends.

But what makes Aik-Wee’s script unique is his relentless pursuit towards excavating the struggles the characters go through in their lives, especially Gerald’s. His effort has simply out-shone the lack of interesting plot points in the play. For the writer, this story is more interesting than many others he has seen this working year, all of which have interesting structural systems to make the play more interesting, more inter-disciplinary, more cross-cultural.

Another strength of his is his ability to write without over-writing the dialogue. Gilbert’s scene with Gerald in the cafe was the most successful, in bringing out the cause of Gerald’s repressed state of being at the end of the play. What’s most beautiful is – the dialogue allowed the fragile and vulnerable side of Gerald to come to the fore, making him a character to be empathised with. However David Leong’s performance was a little contrived, for he put too much emphasis on trying to highlight subtleties in emotions which came across as uneasiness, rather than Gerald trying to hide his insecurities. David could have used Aik-Wee’s deliberate use of short sentences, “I rather not remember that.” to “That was a long time ago.” to illustrate ambivalence. That would enhance the performance even more.

However the dramatic structure – one that runs more like a movie script than a stage play – gave lots of challenges to the director. Samantha Scott-Blackhall has deployed a rather literal strategy to set the scene using multimedia projections, something that could be further used in creating metaphorical references to Gerald and Gilbert’s inner psyche. More could be done to the scenes than just merely showing the back-story of the various scenes.

Ironically the dramatic structure also gave the story the best platform to show a simple but moving story. Every gay person who yearns for love, recognition and validation will strongly relate to the story, for life’s simple desire of wanting to be loved is perhaps the most significant in human existence, regardless of one’s sexual orientation.