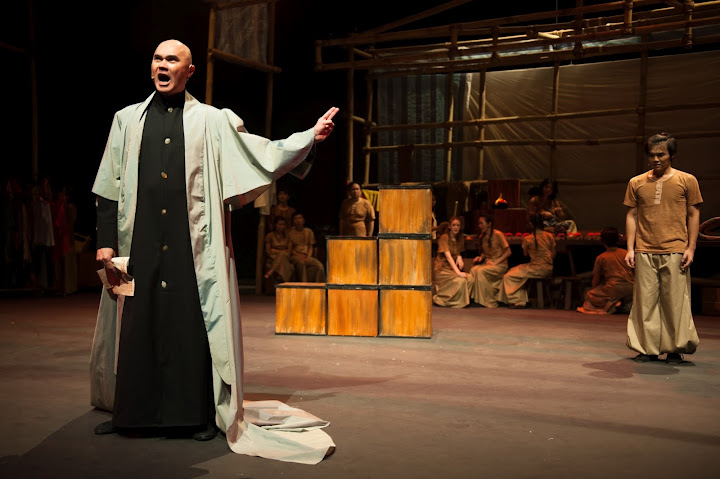 Presenting a musical is an arduous task. To theatre practitioners, it is about good acting, good singing and good dancing. As we look towards the west — or aspiring to be west-end — local (Malaysian) theatre practitioners (and those in neighbouring country Singapore as well) attempting to present this genre of theatre is a worthwhile effort. Skills in singing, acting and dancing aside, what’s important — in fact, more fundamental — is the position specific cultures take in the larger narrative of multicultural Malaysia. For it perhaps could assist in defining what a Malaysian-culture-based musical could be, rather than attempting to present a straight-off western-culture-based Asian musical. What makes The Actors’ Studio’s latest musical offering Paper Crane a more interesting watch is how the loss in translation within the process of translating Malaysian-Cantonese culture for a primarily English educated audience has been compensated through the direction of mixing Cantonese songs with English ones within the show, and deploying Cantonese and English Language in a straightforward way in conversations between characters in the play. In director Joe Hasham’s attempt to compensate the loss, actors attempting to act the characters experienced fundamental behavioural struggles on stage; the aural quality of the songs have complicated cultural identities; the movement of bodies have ruptured the narrative’s potential to tell a nuanced, compelling story.

To actors Roax Tan and Colin Kirton, the roles they played (Ah Kit and Fui Koh, respectively) have turned against them, for the theatre cultural milieu they have been placed within has resulted in complications, which the actors have to contend with. Tan (1), an actor who is obviously Chinese-educated, managed his Cantonese-speaking bits with aplomb, but struggled with the English Language text and songs. The inadequacies have resulted in Ah Kit giving an impression of a character with a rather rough emotional journey. As much as I — as an audience member — would like to experience seamless flow of emotions from one unit of performance to the next, segueing from scene to scene, I can’t seem to rest comfortably not knowing that the actor was attempting to tell Ah Kit’s journey, rather than showing it. In his case, the attempt to compensate the Cantonese (the person) with the use of English Language stirred a feeling of alienation amongst the audiences.

Similarly, in Kirton’s performance — as much as he is one of the two cast members whose performances have kept within the musical genre (the other being Ho Soon Yoon playing Siu Ngau) — coupled with a clear diction (playing Ah Kit’s nemesis Fui Koh) the usage of English Language in translating the nuances in Cantonese opera — especially in bringing out the importance of the head-dress — does not perform justice to the Cantonese culture, for the problem when English Language takes on a dual role in providing information and attempting to re-create the Cantonese milieu in the most honest way possible will result in misunderstanding arising from the loss of translation between both languages.

This reminds me of a reading. Anica Glodjović’s (2010) research into translation as a means to cross-cultural communication has it: It is inevitable that in the process of cross cultural communication, some parts — usually culture bound — will be lost, hence it is the translator’s — the director, in Paper Crane — call to determine how much background information should be provided for audiences to attain that level of cultural immersion.

In addition, in her reference to another translation theorist Nida’s study, she also contended that “complete dynamic equivalence does not seem totally desirable”, as cultural elements need to be kept in order to preserve the original aim of the text — in this case, the story of the Cantonese opera artist (Glodjović 2010)(2).

Balancing story-telling and flashing out the significant emotional nuances within the story has been Hasham’s greatest challenge. As far as possible, he has chosen to adopt a linear narrative in telling the story, aiming to put the story in perspective. Besides languages serving as a form of cultural aural experience for audiences (information-wise), music also plays an equally — or in fact a lot more — important role. Songs possess structures that appeal to peoples within a cultural milieu. In this musical, Cantonese songs assist audiences to recall memories, usually personal. English songs also achieve the same affect. Familiarity is a mysterious thing, for it brings about the personal. The personal is political, for it brings about a position. Therefore the different positions within the songs are in conflict, emotionally. In Paper Crane, the emotional development brought about by the English songs, especially by the ensemble actors, tends to get disrupted by a consecutive Cantonese number. Both of them are different cultural beings. The essence of Chinese culture is about inner-spiritual moments, while the western one tends be outwardly liberal and expressive. These different emotional developments are anchored in different value systems, and they tend to affect the actors’ bodies on stage differently. That applies to the spoken languages (English and Cantonese) as well. The different levels of emotional development within the sentence structures of the two languages seem to convey different emotional states. One notable observation is in a scene when Ah Kit and Fa Koh were engaging in an emotional tussle; the emotional struggle is also present in Siu Ngau’s body. As much as Hasham’s attempt at compensating cultural loss and yet to ensure that audiences could access the story in the best way possible are commendable, unfortunately the challenges posed by inter-cultural translation might be too great for him.

Attempting to complete a story might also be an act of rupturing a moment. Paper Crane is a complete story which covers all grounds of the narrative — like a thesis — but it lacks nuanced emotional analysis. Paper Crane comes replete with all the characters, i.e. actor Amelia Tan as the melancholy; Kimmy Kiew as the comedian; Patrick Teoh as the anchor — all elements of good drama, but the completeness within does not allow audiences sufficient time to sink into the emotional moments within the narrative. As the narrative moves along, another important moment comes and ruptures the narrative almost instantaneously, for audiences are quickly brought to another emotional plane, another story-line, another part of a larger narrative to tell the complete story. The speed in which audiences are being led through the story changes in tandem with changes within the plots. What has this got to do with the movement of actors, one might ask? The actors are busy rushing from one moment to the next, including the ensemble actors; of which audiences have also been brought from one moment to the next in a rush. Bodies are not allowed to adjust to the text, the music, the narrative. With these bodies in constant state of flight, they would be alienated and castrated from the emotional moments. This alienating effect is the struggle an actor’s body will have to cope with while embodying the emotional state of the characters at different moments in the musical narrative.

To use a language is to live the language. Translation is a labour of love. Paper Crane serves an important function in bridging multilingual communities in Malaysia. Like Singapore, Malaysia seems to be more multicultural than intercultural in its daily functioning. People of different races work, live and speak over each other on a daily basis, occasionally to each other, but not with each other. Unfortunately, Paper Crane seems to be speaking to its audiences while attempting to regale the story, rather than speaking with its audiences about Cantonese opera and its artistes. Therefore, the idea of more showing than telling could be revisited and reflected, for showing “with” (rather than showing “to”) could be more helpful in communicating both the physical story and the nuanced emotional complexities to theatre audiences. Showing with the audiences gets them involved, although not physically, but intellectually and emotionally, with actors who could live the language, where cultural familiarity could sink in, with emotions tying to the specific cultural practices in the story which will bring them back to specific moments of that time period.

(2) A. Glodjović. Translation as a Means of Cross-cultural Communication: Some Problems in Literary Text Translations. Facta Universitatis Series, Linguistics and Literature 8, No 2 (2010): 142.