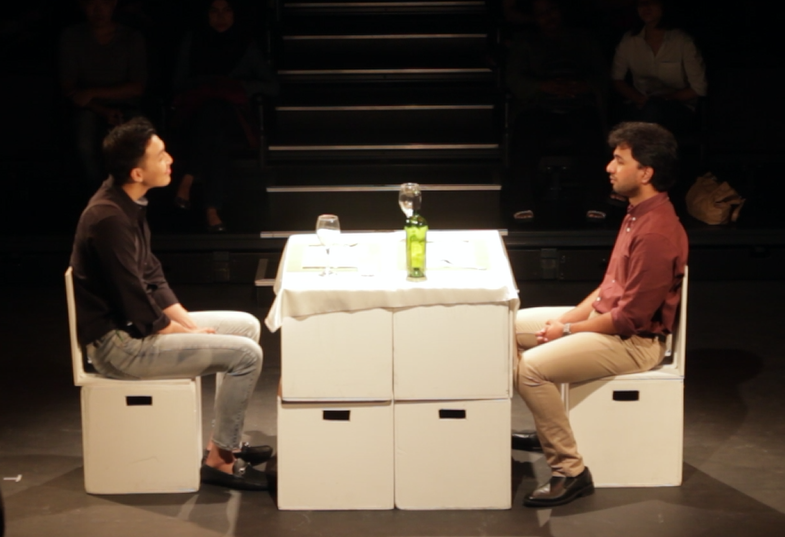 ‘I Don’t Think we Don’t Love Each Other’ – A review of Betrayal: an adaptation

Betrayal, a timeless and ever pertinent piece that espies the wicked and debauched arrangements surrounding Emma and Robert, a married couple and Jerry, Robert’s “close friend”, was brought to the DPAC Blackbox on 15th April. Betrayal: an adaptation, is a gracefully reworked and Malaysianized version, an ode to the original piece by dramaturg, Bahiroh K. Amath.

Set in present day Malaysia, Emma (Vinna Law) plays a practical and schemingly sharp socialite who manages an art gallery, having an enamored dalliance with her husband, Robert’s (Phraveen Arikiah) supposed best friend, Jerry (Shawn Loong) for seven years. All three actors performed equitably well in their character. Robert’s strong presence of a scholarly, egocentric, passive aggressive and somewhat of a sarcastic melancholic were a delight to watch. Jerry’s credulousness and oblivion, playing the manipulable victim, along with Emma’s apathy, materialism and often emotionally detached and disconnectedness to Robert was approbation to the trio’s chemistry. Though the energy at times were not sustained and at points lacking.

Director Asyraf Dzahiri was nevertheless remarkable with his vision. The often vexatious traverse stage setting, was brought to a higher degree of appreciation with his clever staging strategy. Walking in to the Blackbox, a stack of white cube boxes can be seen and you would think “Oh great, boxes. The usual.” However, Dzahiri’s Betrayal wasn’t the case. His architectural approach and innovative minimalistic design was an element of surprise. Being able to dismantle the preconceived ideas of boxes as a structure and luminously choreograph and transform them into something else was a bold and enterprising move. A great kudos.

All-embracing, the texture and material of the play experience somehow was not emotionally captivating as it could be. The lights and sound were adequate and satisfactory yet did not provoked the human emotion to a certain level of anticipation. The transition music set the mood of the play but overtime fell flat and the thunderstorm from the bedroom scene, a bit tedious. The cloth from Venice could have also been enhanced further as it was a symbolic prop wasted. From the actors, a little more energy or physical awareness could have been more impactful than it already is.

Still, It was an exquisite attempt on the characteristically economical dialogue. The team was able to eloquently carry the production and their effort and passion should be advocated and applauded. A beautiful take on the self-absorbed, competitive, deceitful, Machiavellian text filled with ulterior motivations.