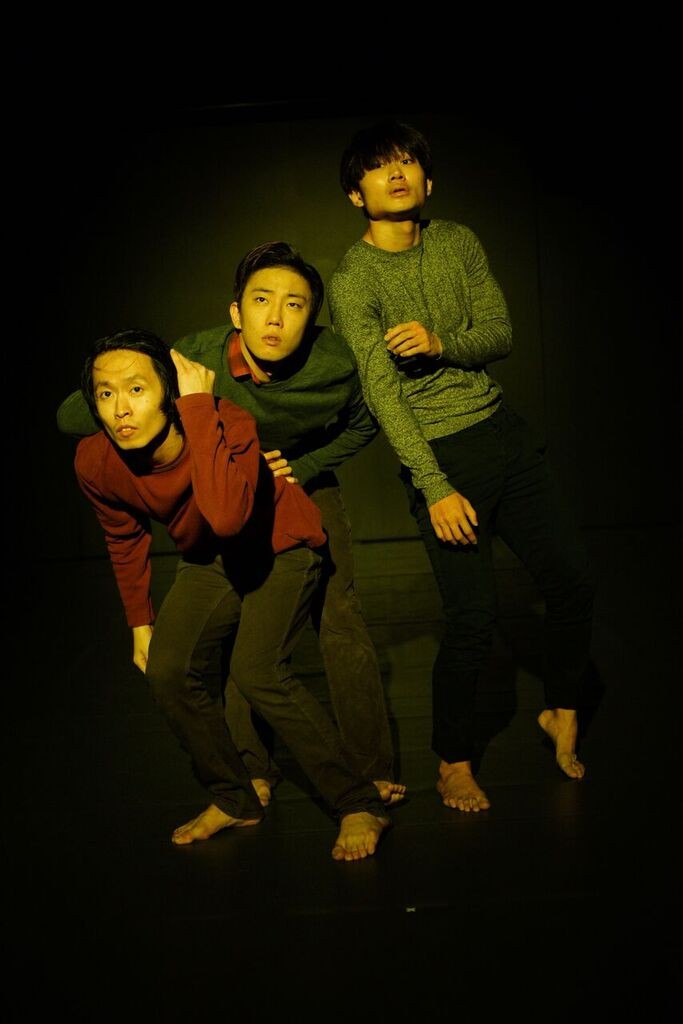 I am going to slightly depart from the usual format of a review to pose some questions. As a theatre writer, I look forward to good performances with technical dexterity and strong concepts; however, most of the time, artists are just recycling old concepts with new vocabularies. Conventional wisdom tells us that nothing is new and creative anymore. Lecturers of ideation have told us all – We are merely recreating from existing ingredients to create “the new”. The spirit of innovation and invention is waning. The same argument could also be used in the performing arts. A case in point – The three performances in Programme B, D’Motion International Dance Festival, co-presented by T.H.E. Dance Company (Singapore) and the Damansara Performing Arts Centre (DPAC) held on Friday (18 December 2015).

I have no doubt that all dancers are technically strong. Singapore dancers Goh Shou-Yi and Jackie Ong, and Korean Kim Hwan Hee have created new vocabularies in their piece entitled –:–. All of them are able to hold their grounds in executing the concept of holding on memories while living through life, through relationships between peoples. Breaking the illusion of a performance, they engaged the audiences by taking photos of them and with them, an act that could be seen as love, but in the setting choreographers Goh Shou Yi and Kim Hwan Hee have set up, it seems more like a satire reflecting our own vanity and need to receive attention from others. In Malaysian Amy Len and Japanese Naoto Katori’s piece The Game, a game has been set up to challenge the dancers, in which Katori himself participated in, alongside Malaysian dancer Wong Jyh-Shyong. Like any other game, the outcome should have been unpredictable. Despite both dancers keeping to the rules of the game, the winning party (outcome) was pretty much predictable. This was the case because the stakes were high, but the dancers and choreographers were risk adverse. Both dancers were betting with other by stripping down on stage. Since, nudity on stage is not allowed in this country; inevitably, there is an “end” to the game eventually; Naoto was stripped down to his undies. With this, the showing went on with the next unit of choreography. The game was not continued to its full with the higher stakes. Nonetheless, dancers Naoto Katori and Wong Jyh Shyong are impressive in their own ways: Katori with athletic grace; Wong, whose techniques adhered to institutional discipline from his alma mater. The third piece that wrapped the evening’s showcase was choreographer Er Gao from China. In an attempt to use nostalgia to explore the disco culture in the past, in a Chinese setting, dancers Hanaa Tan Qiao Han, Kyson Teo Khai Shen, Lim Jie Jing, Lim Pei Ern, Meledy Tee Kai Le, Rachel Chew Zi Xin and Yan Ni executed Er Gao’s personal obsession of a woman trying to find her place in society in different times, largely through nostalgia. Audiences were left a little bewildered when the piece ended with uncertainty, for what has been promised in the marketing blurb does not seem to come through. One such example is about forgetting gender and going back to the fundamental. Only one scene attempted to portray that – Putting the only male dancer in his mother’s wedding dress. Terms such as identity, gender and pure movements should not be used merely as decorative devices.

Existentialism seems to be the best theme to link all the three pieces together. The first piece –:– made the audiences reflect upon their very existence in a performative space. The solution the piece proposes seems to be keeping memories alive; the audiences were invited to bring their own pictures home. Death was also briefly touched upon, alongside other ideas about living and relationships, albeit in fragments suggested by the bodies on stage. As mentioned in my last paragraph, the photo-taking was more of a ridicule than audience engagement. If that’s the intention of the piece, it has conveyed it well. Similarly, in Amy Len and Naoto Katori’s The Game, both characters are being set in an inadequately difficult situation. Within that framework, the outcome of the game could very well be rigged, or choreographed for convenience. Interestingly, it precipitated another question: Is the conventional black box space a suitable space for such an artistic set up? It is worth pondering on. Perhaps a cross-disciplinary approach, in terms of space, might be able to bring the work further. Lastly, in Er Gao’s piece Disco-Teca, unfortunately, it fell into the Chinese problem of holding on to nostalgia and refusing to move on. Nostalgia could very well be a veil spun by fear where we take refuge in. In Er Gao’s piece, it was clearly so. On Er Gao’s intention to discuss issues about gender, gender bending is not about representation; it is about the body, like anything else. The body needs to be interrogated, exposed and surgically altered artistically in order to bring about a suitable premise for a good discussion to take place.

Back to the initial question about ideation, how could artists engage the conventional wisdom that there are no new creations in this world, only re-creations? Perhaps, we could look at it from another perspective. How high are the stakes we are willing to take? It would be a more relevant and suitable question to ask of us who live in the contemporary world. Art is dangerous and subversive. We all know that. However, to what extent are we willing to let art question our topics at hand, that’s entirely in the hands of the artists.