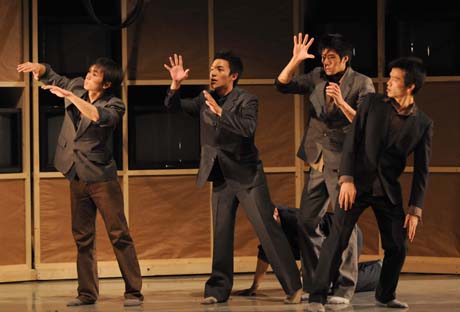 The basics to dance choreography revolve around understanding the form. For a young dance company like Taiwan’s all-male dance company Horse, it is apt that experimentation should start from there. They have been successful, having won the 2008 Taishin Arts Award Taiwan’s Grand Arts Prize.

Everything in Velocity — from the underlying themes to the dramatic overtones and sets used – is dreamt up and contributed by all members of dance theatre group. Through the exploring of the frenetic nature of contemporary society in pulling people and things apart, this dance production aimed at randomly showing these permutations on stage, energetically. The dancers will experiment with speed and the control of their movements, only to find themselves separated or left behind.

Velocity is a mixed bag of experimental theatre, drama and mime, deliberately lacking in any specific cultural identity. It is a comment on the deterioration of humanity, reflecting on its history.

In their American debut earlier in 2008, dance critic Jennifer Dunning was full of praise, calling them “… it was a feast of evocative, playful small dances showcasing the supple physicality and subtle dramatic gifts of its performers.”

A show not to be missed.

* Not suitable for patrons aged 12 and below.