Fight Club: A Chorus of No Longer Idle Footsteps | A Review 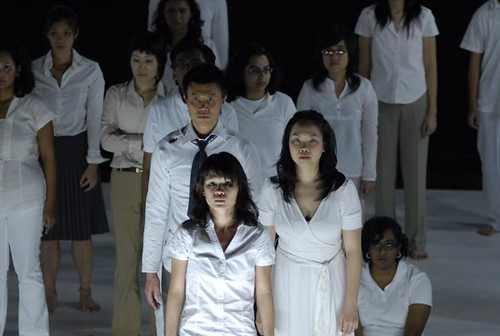 Picture by National Museum of Singapore

Seeing Manhattan from the 110th floor of the World Trade Center … A city composed of paroxysmal places in monumental relief … The ordinary practitioners of the city live ‘down below’, below the thresholds at which visibility begins.

Fight Club: A Chorus of No Longer Idle Footsteps

After the performance I had the opportunity to catch up with several friends who were also in attendance. Excited by what I had witnessed on stage, and curious if others shared my enthusiasm, I took the chance to ask them what they thought about it. “Organised chaos” were the words most used to describe what they saw; yet another said to me that Fight Club was not “crazy” enough, that it was too tame. In other words, these friends of mine did not take kindly to the show: they were either offended by its seeming lack of coherence or were uninspired by what they perceived to be its failure to milk its subjects for what they were worth. While I thought Fight Club was an almost perfect piece of art.

Fight Club takes its name from the David Fincher film starring Brad Pitt, Edward Norton and Helena Bonham Carter, which was itself adapted from the cult novel by Chuck Palahniuk. Both novel and film depict a fantastical vision of an unnamed present in which domains of power and organization become undermined by the pressure towards conformity it builds up within itself, which eventually manifests as a violent backlash of organized anarchy and total destruction. There is something gleefully satisfying about the depiction of authority being successfully annihilated, of the triumph of a brave new world of utopic dystopia. The collaborative effort between diskodanny.com and post theater borrows themes of the film, and explores the hypothetical situation of organized anarchy within a Singaporean context: if a militant anti-establishment organization, as the titular Fight Club is, were introduced into the local society, what forms would its subversions take?

The performance operates on several levels. First, there is the title: it is a mark of hermeneutics that occupies the interstice between event and hypothesis: it denotes the anarchist organization; it also denotes its fantastical position, by which I mean it is an aspect of literary / filmic / theatrical imagination; lastly, it is a nominal register of the performative itself. It is an over determined sign whose potency lies in its failure to compel the perceptive audience into any singular conclusion as to what it actually represents. It is a sign that is anchored within the imagination (as hypothesis) and yet reaches out as an event (taking the form of the actual representation of the hypothesis as novel, film, theater). This semiotic fluidity foregrounds the meta that is an integral component of post theater’s methodology, and provokes the questions: where does the real performance begin or end; does it matter to know, and to what end?

What I like about Fight Club has to do with its methodology of examining power. De Certeau’s essay makes a point about power and its relation to acts of seeing: to descend “below the threshold at which visibility begins” is to step outside the field of the panoptic vision that can only apprehend the city as that which, conceptually, is “composed of paroxysmal places in monumental reliefs.” It is to step beyond the limitation of a particular reading of the city, to grapple with the metaphorical or migrational while letting go of a fixed notion of the city as a clear text, planned and readable. The descent is an escape from the fall into a totalizing view of the city. It is to meet the historically singular individuals that inhabit the city, and to witness their passing-bys. Faith in this descent is a reflection of the optimism in De Certeau’s essay that informs it as it says “the Concept-city is decaying.” However, it is this faith that is also blinding De Certeau’s narrator from the facts that remain: one never truly escapes the city, whether one is standing above it or dwelling in its bowels. This gives us a hint of what constitutes, if not an aspect, the nature of power: the inescapable. What cannot escape the act of seeing is the position from which one sees, where the projection finds its origin. Power is located in this origin and invested in the projection, which brings us to the second point: Fight Club problematizes the act of seeing by reversing the gaze of the audience, pushes it back upon themselves, and expanding it to take in as diegesis what lies outside the visibly empty stage before them; it pushes cognitive totalization to its extreme. As each performer emerged from amongst the audience to take their place on stage, it was no longer about dialogic relationships between audience and stage, it was about existing within the singular superstructure of theatre; as the audience were shown projections of the performers seen from bird’s eye view in relation to the stage, it was no longer about evoking omniscience in the audience, it was about invoking the surveillance of audience by audience.

Third, given its Singaporean context, Fight Club is necessarily a performance that must fail in order to succeed. This is why the remark of my friend, that Fight Club is too tame, was to me especially provocative. But Fight Club was not concerned with provocation: it demonstrated the inefficacy of provocation. What the audience saw on stage were mostly improvisations of both professional theatre practitioners and non-professionals. These improvisations were noticeably derived from a keen observation of the behavior and mannerisms of Singaporeans: they gossip; they are distant to events that do not immediately affect them, by which I mean career and reputation; they are puzzled by the idea that a meaningful life can be lived through self-reflection; they translate the horror of the unknown into cheap, vicious humor; they laugh at the follies of others, and yet cannot really explain how different they themselves are. Of all the improvised movements that occurred on stage – and there were many ingenious moments – one was particularly memorable: as random performers broke into epileptic seizures, the other ‘normal’ performers started to laugh at them, cracked jokes, and some even took out their cell-phones to take pictures. When prompted by the more conscientious amongst them to help the victims, these ‘normal’ individuals began to rationalize away their obligation to help – “Why don’t you help them yourself, since you care so much?” one of them said. Naturally, none of the ‘normal’ individuals came forward to ease the sufferings they were witnessing before them. Thus, it seemed fitting that all of them turned epileptic in the end, in a powerful moment of chaos, helplessness and mass hysteria: as if justice had been served. I also recall another moment, either before or after what I have just mentioned occurred, in which the final moments of David Fincher’s film were being projected above the stage, on its adjacent wall: the narrator (Norton) and Marla (Bonham Carter) were standing on one of the floors high up in a skyscraper, his hand in hers as in marriage, and looking out upon a vista of collapsing skyscrapers (emblems of late capitalism), each blown apart in succession by terroristic pyrotechnics. What is crucial about this filmic image is the introduction of a notion into the performance, that what we see in the film – the total annihilation of late capitalism’s supermachine that turns human beings into laughable relics of their lost humanity, unfeeling, incapable of and uncomprehending towards compassion – will never manifest itself as reality, however much this impotence infuriates (if we do care) or not (if we do not care). It remains a mere hypothesis that draws its power from a wounded and festering imagination: its witnesses will always be spectators, taking pictures, consuming the spectacle, and doing nothing else – gutless and clueless to do anything else. What is remarkable about Fight Club, thus, is the potency of itself giving form to this impotence through demonstrating the a priori inefficacy of the hypothesis within a Singaporean context.

As I watched the performance, I also took care to observe the audience, since being situated in an environment of post-theatricality, everything is theatre, hence, in some sense, worthy of note. Some audience were conscientiously attentive, others looked astounded or just simply puzzled. As the performers worked themselves yet into another moment of raging hysteria, the yuppie lian beside me remarked to her partner: “What is going on huh?” Another example why Fight Club is such an almost perfect work of art. That which would perfect it would be that condition in which we no longer have any need whatsoever for a work such as this.