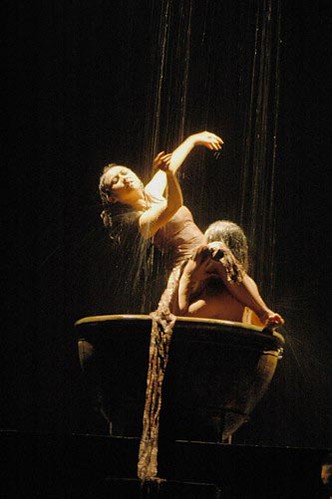 Suwung, literally, “empty” in Javanese, features the highly refined techniques of Javanese court dances and the mystical topeng or mask dance in an experimental, intimate work by Besar Widodo. Experience the contrast between the dynamism of Suwung’s warriors and the sensuousness of its love scene. Besar Widodo, a contemporary dancer and choreographer from Yogyakarta, is known for his socially challenging works.

Notes to the programme

Within a preconceived society, a man is in oblivion in the dream.  Taking steps forward with relentless vigor, unable to hear the earth’s voices.  The reason, he is a king – an authority that ranks above all.  The mother also fosters this whimsy by bestowing him the world as his crown.  Alas he becomes a slave to the dream. Thus the voices of the earth shatter the dream, as he huddles in his own ambition.

Suwung in the Javanese language means empty, hollow, or void. This piece explores the moral fiber of men in the context of patriarchal Javanese culture. A culture who values men ‘more’ as if appointed by the supremacy of the natural and spiritual world.  Nurtured by its own culture, the concept of power has generated the mystique and mind-set of Javanese men supported by their spiritual-cultural values. In this context, most men expedite their imagination within an emotion that binds them to a haunted glorious past time, without realizing that time has already spun beyond its restraints. This leaves the male entity often lingering in a state far from reality. The female entity has also contributed to this nature through their own submissive attitudes, not realizing their own strength that actually has great influence on their counterparts. If a woman has any great authority, it’s generally through a mystical viewpoint. For example the beautiful Queen of the South Seas, whose power is greatly feared, provides the spiritual superiority of the king’s sovereignty through their marriage as noted in myth that is still valid to this date. The legitimacy of man’s true entity and power as cultivated by its own society comes to question. Perhaps the question to propose is how can man develop his own true self rather than be conformed to what the Javanese culture has modeled for him?

ATMA | A Review
Fight Club: A Chorus of No Longer Idle Footsteps | A Review