In Mira, a dance performance by Raka Maitra | A Review 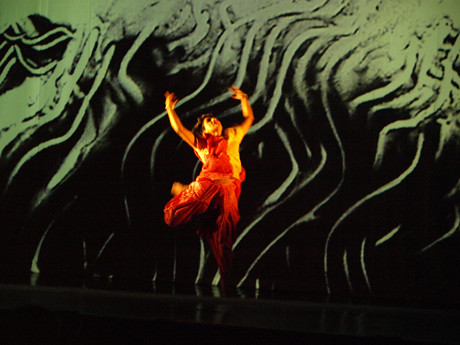 Amid the hype in The Necessary Stage’s M1 Fringe Festival- an annual festival showcasing cutting-edge works from different countries- where many local artists soar in great numbers to see the latest and newest in theatre-making, Raka Maitra, a local contemporary Indian dance choreographer and dancer, was having a silent revolution of her own.

The revolution that seemingly sees a discovery to the enigmatic term dance critics/writers around Asia are grappling with tons of papers in symposiums and journals: Contemporary Indian Dance.

It is precisely the richness of the Indian dance beats and the indefinite ways to improvise the Raga, the wonderful melodic modes in all Indian music pieces, in many different ways that make Indian dance, like many different dance forms, open to limitless possibilities. Rather than trying to use external elements – lighting, sound and set design – to contemporise an existing Indian dance choreography, there lies the wealth of cultural elements ready for appropriation within the very nature of the Indian dance choreographic language, the essence in the movements, not forgetting the Mudras, each and every dance form possesses in the this area of performing arts.

Raka Maitra’s choreography did just that. Indian dance language permeated throughout the evening, making it rooted to its very source, to Mira’s poetry about maiden in search of true love while wading through the trauma of unrequited love. In addition, the rich cultural landscape painted by the truly talented and imaginative fine artist, Chen Huan, gave Raka’s choreography a whole new perspective through rich visual metaphors and allusions to the Mira’s poetry.

From mystical drawings of the eye to the sun, to vast landscape resembling those of Nobel Laureate Gao Xingjian’s works, to a rose, to a man in the moon, to clouds and flames, to wings, to doves transforming themselves instantly into sad expressions on an Indian princess, to hair flowing from the princess’s head, to phoenix, to a woman sitting by the sea, the list goes on. The vast imagination embodied by the fine artist reflects what art can do regardless of materials used (she used plain black sand, by the way).

Besides the works of the fine artist, which could, at some parts, overshadow Raka Maitra’s performance, the other striking element in the dance performance is Raka Maitra’s ability to choreograph and perform a contemporary dance sequence, while keeping the Indian choreographic language in place, to an evocative piece of piano music by Philip Tan. In this particular segment, Raka Maitra exudes a quality of peace and tranquility, a crucial element in Indian dances where rootedness is the key to weight control, while executing contemporary dance steps derived from the Indian dance choreography. Each and every move reflects the artistic thought that has been put into the dance piece, keeping in pace with the rhythm of the poem powerfully read by T. Sasitharan.

The ragas sung by the musicians from Rajasthan followed closely behind after Raka Maitra wrapped the dance routine on a sombre note, which gave the energy in the theatre a whole new boost, bringing the audience from one point in the narrative into another.

Audience members were obviously captivated by three exemplary performances: Raka Maitra’s movements, the fine artist’s sand paintings and the Rajasthan musicians mesmerising voices. The three elements took turns to capture the audience’s imagination while pushing the narrative along. Not in one moment was the narrative lost in the process of story-telling.

It was indeed an evening well-spent in the theatre. I personally have enjoyed myself in appreciating what Raka Maitra has done. Not to mention, the maturity of her work that has, through the years, taken shape, in the spirit of a young master in the making.

It is in this vein I make a return to the initial question I have posed in the first few paragraphs: What exactly is Indian contemporary dance? The answers can vary, subjective even, but the real answer lies in the process of relentless search for the breakthroughs within the cultural form; in this case, the Indian dance form. The vast and greatness of the Indian civilisation might intimidate us, but that should not stop artists from searching within themselves, a historical body embodying the one’s own culture and heritage, for new vocabularies of their own.