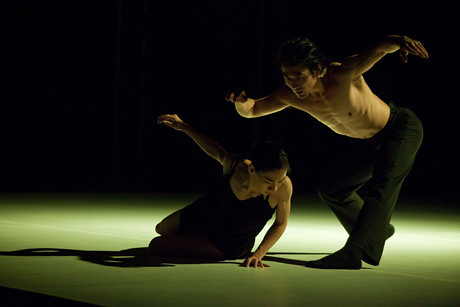 T.H.E Company made history last night. Variance, their latest and largest production to-date, was a full-length contemporary spectacle of virtuosic choreography and performance. There is simply nothing quite like it thus far that is made-in-Singapore and I applaud the company for their vision and dedication.

On the outset, it is important to highlight that this is a fairly new professional dance company; one created despite a lack of resources. But the company was not lacking in vim and vigor, its members pulled all the stops in a show that went beyond expectations. It was hard to be cool and critically objective. I felt a sense of pride on their behalf. ‘Wow’ was a very apt word!

In my response to the work, I shall attempt to think with two hats on, perform a ‘variance’ of my own. I begin by trying to ‘suspend disbelief’ and enjoy Variance for what ‘it was’. By saying that, I preoccupy myself with the actual presentation of the work. In contrast, my response towards the end would place more emphasis on the content, attempt to see the work as a critical work of art. That is when I briefly highlight where Variance was not quite satisfying.

The mise en scene of ‘Variance’ was particularly breathtaking. Kuik Swee Boon opted for a minimal, asymmetric stage for the first half of the work. A thick green pole – resembling a bamboo pole, signifying nature – connects floor to ceiling on the left half of the stage. Lamps with small metallic shades and white bulbs extended downwards around this pole, gradually creating a vague reminder of a forest and a star-lit sky. This meant that most of the dancing was done on the right with occasional forays into this ‘forest’. The resulting tableau hinted at a dichotomous relationship between man and environment; hence the title of the work.

Muted colours provided by the lights and costumes painted a visual space that was immense but intimate, melancholy but beautiful. The sound compositions of Darren Ng enhanced the poetry of this setting, endowing the dance with a gentle but unsettling harmony of strings and digital noise. I thought of Hiroshige’s floating world, where human figures running from the rain do not denote a fear but states, albeit poetically, the fact of their mutual existence.

Figure and Ground featured quite strongly in Variance. The dancers, even in pas-de-deuxs, did not so much illustrate their relationships with each other – which is usually the case – as underpin their collective relationship with the space. Spaciousness drowned the dynamic figures in Variance. The stage was made as large and wide as possible, especially in the second half of the work.

After the intermission, Variance moved the dancers from nature, into an urban environ. Rain returned as a poetic motif but to convey a different sensibility. This time, the intimacy of figures was more closely explored (more pas de deux choreography). The otherwise drifting, solitary subjects encounter each other in the harsh environment of the city and by a need for intimacy when the city is drenched by rain.

Here, Variance is more successful than Old Sounds, T.H.E.’s first full-length work, where the modern landscape was contrasted against the past with naive nostalgia. In Variance, Kuik Swee Boon has paid some guarded attention against the trappings of clichés. Human relationships and social spaces are rendered with more nuanced complexity in Variance.

Of course, the dancing itself warrants much discussion. Yet, I have chosen to look less at it as I suspect that the movement motifs of Variance were not as idiosyncratic or intricate as that of Old Sounds. But is this my own problem in that I was limited by foreknowledge and have too specific an expectation this time? Or could it be because since in Old Sounds, dancers sometimes got a little caught up by the technicalities of complex choreography that in Variance, Swee Boon generally went for something more conventional the better to allow the dancers to fully commit to their performance?

In any case, the dancing of Kuik Swee Boon himself (he performed in the second half of Variance), together with Sylvia Yong’s, was highly laudable for their maturity and presence.

In the second half of the double-bill, a solitary male voiceover comes on intermittently to recite private thoughts about the rain and relationships. The use of Mandarin here jarred with me not because it was alternative to the use of English as status quo in international theatre but that it was written and delivered in a particular mode, one that is reminiscent of cheesy mando-pop. The danger of incorporating such cloying lyricism that Chinese pop culture is particularly fond of is that it became hard for me to engage with the text with any seriousness. The economy of means that held clichés at bay in the first half of Variance had given way to an unnecessarily flowery sentimentality in the second half. If the work was critical in its engagement with issues, I was not so sure anymore.

And this brings me back to my perennial problem with performance spectacles. The exuberance of T.H.E.’s work, like that of large-scale dance productions in general, continues to have the ability to charge our senses; but when it comes to engaging with any issue meaningfully, dance is often found in wanting. At the end of Variance, I want to know if I have learnt anything through its ‘different interpretations of Man’s relationship (not just natural environment but also the man-made environment).’ Here, I am troubled by the handicap that characterizes dance works like Variance. The work reinforces stereotypical notions about Man and Environment and does not shed new light on the issue or begin to unpack any of its assumptions. Is the city just tenacious construction noises and strangers alienated by each other? Is nature all trees and stars and benign beauty? In that sense, contemporary dance becomes much-ado-about-not-very-much.

Of course, there are no easy answers to this problem. So here, I humbly invite all the artists at T.H.E. to ponder with me…

daniel k is an artist / choreographer / art educator. He received the Young Artist Award for Dance in Singapore in 2008. Discussions on art, politics, climate change, pop economics and travel gets him going; electronic music and clubbing too.

In Mira, a dance performance by Raka Maitra | A Review
What is an Axis of Culture?