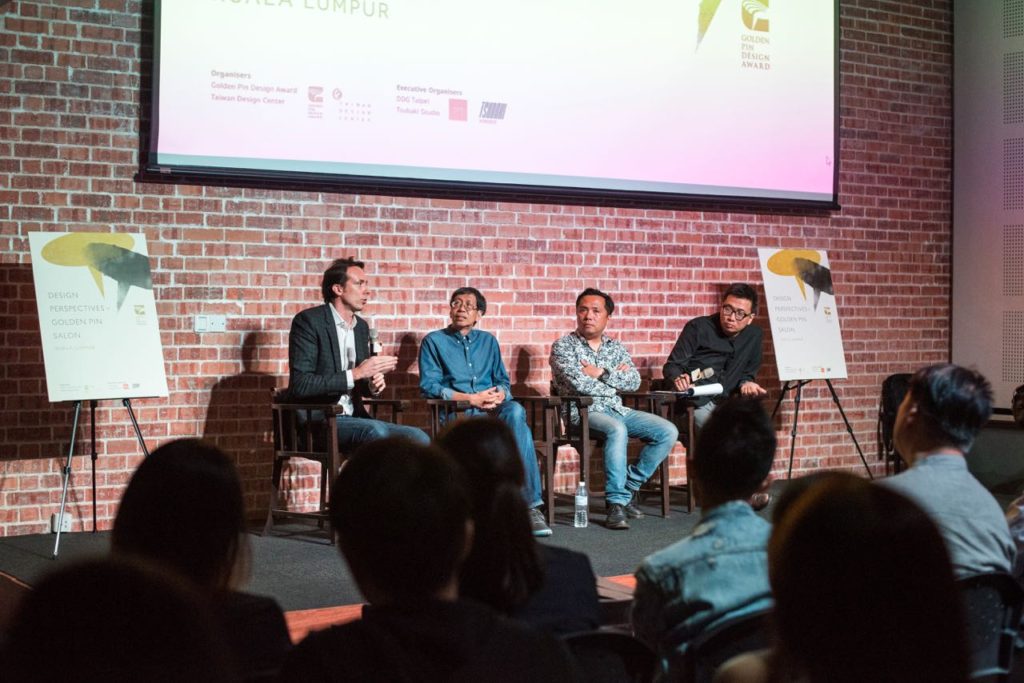 Keeping the formal and promoting discourse in Malaysian Design

Recently, the Taiwan Design Centre organized its very first design salon titled Design Perspectives X Golden Pin Salon in Kuala Lumpur. Besides introducing the awards – the Golden Pin Design Award and the Golden Pin Concept Design Award (for younger designers) – the evening featured three speakers from Malaysia, Taiwan and Hong Kong, namely William Harald-Wong, Rock Wang and Kristof Crolla. William opened the evening with his perspective on “huaren” (Chinese-inspired) design in multicultural Malaysia; Rock Wang on his works that celebrate multicultural fusion of Chinese cultures; Kristof Crolla on his spectacular sculpture-installation Golden Moon. All three speakers offered different perspectives on how their works relate to Chinese sensibilities, but all of them did not seem to have touched on the philosophical aspects of interculturalism. Perhaps, the intercultural processes are embedded within their works. This is one area that lacks discourse in the local design scene.

Wong mentioned the importance of history and culture when considering design. Although he did not offer thinking processes in which his works take shape, he gave a good case for considering history and culture. From how the Chinese diaspora took place and immigrants coming to the South – to Singapore and Malaysia, Wong provided evidences of how Chinese sensibilities have imbued into the local fabrics of Malaysian society. Peranakan culture is one such example. One of his works called Mata Samseng, where he encourages students to see and consider designs from different perspectives, liken a police and a gangster (in mischief). Wong’s intuitive process in considering motifs from different cultures demands more articulation. He ended his talk with a brief introduction of his Peranakan family and his commercial work with Malaysian art-shopping mall Publika.

Taiwanese Wang, on the other hand, spoke about his whimsical and light-touch design sensibilities through four thought perspectives: History, Agriculture, Life and Culture. Through history, Wang spoke about getting inspiration from material history from architectural designs and transform them into products, for example earthen-ware. Agriculture refers to the the natural process in which silkworms weave cotton. He cultivated silkworms to make silk cocoon lamps. To Wang, Life travels in a fast track. His love for motorcycles made him think of the relationship between this city staple in Taipei and, its society and people. Lastly, in Culture, Wang used Taiwan tea culture to bridge the communication gap between people and nature.

An architect, curator and academic Kristof Crolla – challenging space constraint in Hong Kong, Belgium-born Crolla shared his intervention in the public space in Hong Kong through giant structures such as the Golden Moon and the ZCB Bamboo Pavilion. Materials were traditionally-treated bamboo. Traditionally trained craftsmen worked on the structures. Each project involved detailed planning and design to get all the parts together with minimal nut-and-bolt based joints.

From the Malaysian, to the Taiwanese, to an intervention into spatial politics, one cannot ignore the effect of history and culture on the peoples in the space. Most importantly, there is a need to formulate a thinking process to map out how history and culture interact with the actual everyday happenings in the city and societies these designers operate in. I am not saying that these processes did not take place when designers work, but rather intuitively. Formal structures towards these interventions are clearly better articulated and communicated than the philosophical underpinnings behind these formal constructions. That would be a significant development in promoting discourse in Malaysian design.