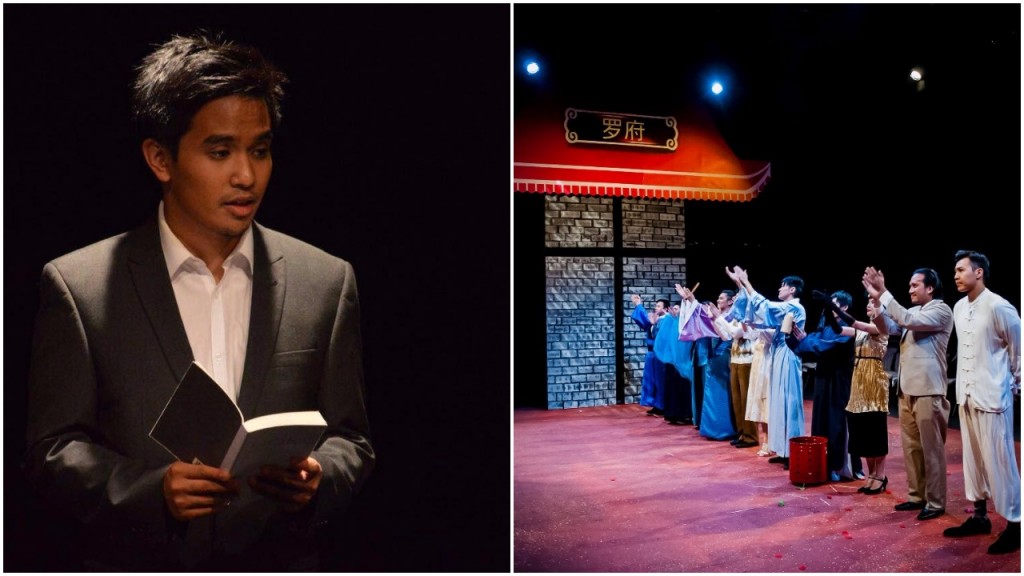 This is not a review of Malaysian theatre companies Sifu Production’s Lo Mio and Chiu Liet, and Anomalist Production’s Home, neither is it a critique to justify a right form of Malaysian theatre to be presented. I would like to highlight the beauty of natural switching between languages presented in some Malaysian theatre pieces to this multicultural society. Predominantly Malay in demography, Malaysia is a society composing of Malay, Chinese, Indian and peoples of many other combinations from different races. As much as the national language is Bahasa Melayu (Malay), Chinese languages, English and Tamil – amongst others – are also commonly used in everyday life. For the last five years I have been in this town, I have grown accustomed to the Malaysian accent, which is subtly different from mine (Singaporean). In my opinion, Malaysians switch codes more efficiently and vernacularly than Singaporeans, whose habit in doing so is generally more distinct and clean-cut. It is not a definitive observation, but a personal opinion. I appreciate the Malaysian accent and the way the peoples switch-code between the languages in everyday life. I had yet to encounter such a wonderful experience in theatres in Kuala Lumpur till I saw the adaptation of Shakespeare’s Romeo and Juliet into a culturally Malaysian production at the Kuala Lumpur Performing Arts Centre (KLPAC) and a young people’s theatre production named Teater Home, which raises issues on national and self-identities.

The adaptation entitled Lo Mio and Chiu Liet (Romeo and Juliet, in a culturally and vernacularly Chinese sense) used rich Chinese languages (from Mandarin, to Cantonese, to Hokkien) and English in the play. Home used Bahasa Melayu and English interchangeably. To me, both productions are truly Malaysian, culturally and in terms of the use of languages, the mode of communication. What makes them Malaysian is the way the languages are being used and switched throughout the performances. Most importantly, every single audience – regardless of race – understood the plays and enjoyed the theatrical experiences. In Lo Mio and Chiu Liet, every audience member could relate to the Western-educated Chinese family of Chiu, as well as the predominantly Chinese-educated Chinese family of Lo. In Malaysia, there is a marked difference between the Chinese peoples of these two cultural and educational backgrounds. Every intonation and cultural inflection exhibited by the characters in the two rival families in Lo Mio and Chiu Liet was a reflection of the two types of Chinese peoples in the Malaysian society. In Anomalist’s Home, the use of Bahasa Melayu and English – in its unique cultural grounding – is colloquial and distinct. Both languages were presented with clarity and dexterity. There is also a marked difference between those who are educated predominantly in English (in an international school setting) and predominantly in Malay (in a national school setting). They are the nuances within Malay peoples in Malaysia.

The beauty of these languages presented in the two productions is more than just colloquialism. It is testament to how different languages could be sewn into a beautiful tapestry with skillful transitions in and out of each language. Malaysian audiences have no difficulty in understanding the languages used, for the mode of transition is also familiar. It is part and parcel of daily life in Malaysia. Sewing up different languages in a play is a difficult process. Tightening the tapestry and making smooth transitions from one language to another is another level of creative challenge. However, if successfully carried out, it is the way to unite Malaysians with a common collective imagination, through languages.

Theatre is a communal space where audiences gather and build an experience. It is a space where people could share common aspirations and ideals. In order for this process to take place, audiences must feel comfortable and safe in the theatre. Comfort in terms of the familiar and safety in terms of non-discrimination. Both productions Lo Mio and Chiu Liet, and Home provided a comfortable and safe environment for their audiences. They were respectfully entertained and engaged. The play content were also highly reflexive.

More productions as such should be encouraged. More could be done to build common imagination for Malaysians. In a racially divided (and this applies to everything else that is related to race too) society, only the spirit of humanity could establish this common imagination. Singapore has used the English Language as the working language (an attempt to use it to establish a common cultural imagination among Singaporeans), but it is not a completely successful experiment, for humanity and culture were largely ignored during the initial stages of national identity building. Building a national identity with one common language is not feasible. A multitude of languages might be the way forward; however, if languages are only being placed side by side with each other with no interaction, they will at best serve only as a decorative item showcasing the multicultural quality of the society, not the intercultural potential that lies within the usage of these languages and transiting from one language to another.

To theatre makers of Lo Mio and Chiu Liet, and Home, you have found a powerful and engaging way of presenting theatre to Malaysian audiences. Average production qualities notwithstanding, these productions have great potential in achieving greater ideals than just good production values.