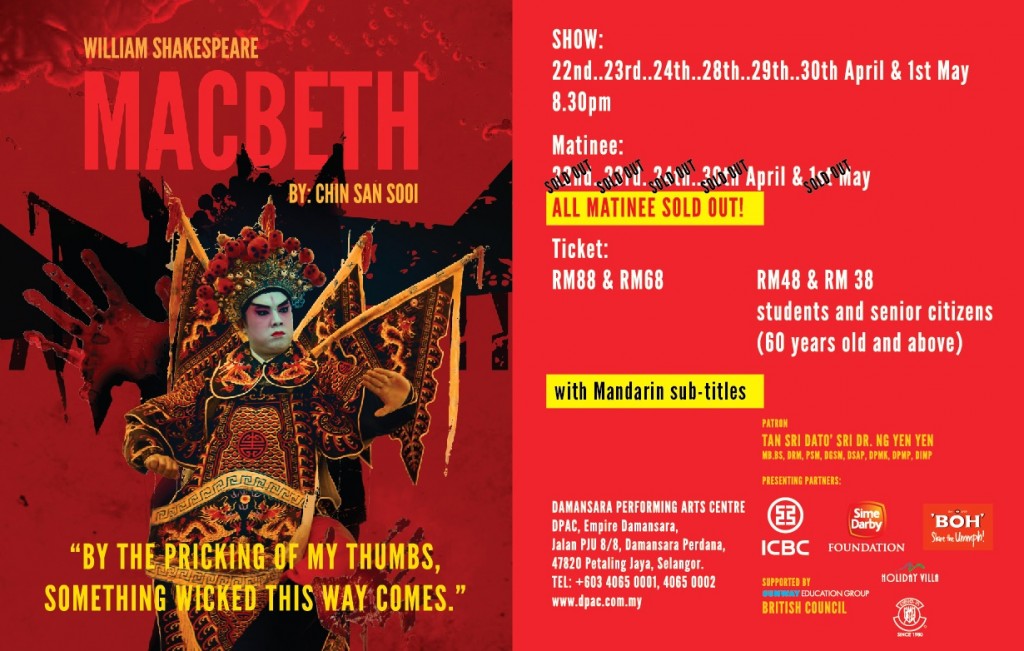 I ask Chin San Sooi how is he going to do that.

Here is what we have discussed:

Qn: The Chinese opera is a complex system. It encompasses singing, doing (action), speaking and fighting. How could the Chinese opera system depict the Shakespearean play Macbeth?

Ans: The employment of Chinese Opera elements is not a whole sale importation of the opulence of the complexity of the Chinese Opera. Obviously you cannot sing in the high pitch voice the text of Shakespeare.  Shakespeare would turn in his grave if this were done. But some of the elements in terms of the accompaniment of the percussion may be employed as an accompaniment to the text in order to punctuate a heighten or comical moment. Some suitable hand gestures could be used too. The battle scene would be the best place to employ the Chinese Opera technique of the sword play, which in the mind’s eye of the audience is not a realistic representation. Clashing swords do not touch; the gongs and cymbals arouse and conjure the excitement of the fight. The gorgeous costumes would win hands down. Just like specific plays of the various Kings of England: the other plays with name places like Iliria in Twelfth Night, The island in The Tempest, Belmont in The Merchant of Venice, Ancient Briton in King Lear, Sicily and Bohemia in The Winter’s Tale are almost mythical settings.  Such plays that give an insight into life may be played in any kind of costumes. In any case, Shakespeare has urged his audience to let their “imaginary forces work”.

Ans: Macbeth touches on the elemental nature of Evil. The story line is epic in nature. So, visually, the splendour of the costumes lends to the scope of telling this story. This is particularly seen in the characters of the generals, the royalty and nobles. I also believe that some of the heightened method of acting could be used effectively to color Shakespeare’s text.  All this needs to be worked at and time is the essence. My gut feeling is that it can work and it needs someone to work at it.  I can but may not have the time. Since we are employing the Chinese Opera elements in Macbeth, I thought that doing The Inauguration of the Prime Minister (Lok Kok Tai Fong Seoog) would enhance the Chinese Opera ambiance in the celebration of the 400th Anniversary of Shakespeare’s demise. LKTFSW is traditionally done by a Cantonese Opera troupe to herald an opera season. It is an advertisement to show off the troupe’s collection of costumes and the basic mime employed in the performance of the piece.  This is also to arouse an interest in the Chinese Opera.

Qn: How would Macbeth 2016 be different from your showing of the same production in 2015?

Ans: Some of the members of the cast have been changed as the original actors have other commitments, examinations to attend. This time round I am using Chinese opera make up which I did not employ last year and would be employing more Chinese opera touches with the movements. The original cast has more time to explore their character. If you have seen the 2015 production, come and see the difference in this.

Qn: 2016 is the year of Macbeth’s 400-year death anniversary. Everyone is doing Shakespeare in this town. How would your Shakespearean production be different from the rest?

Ans: I have not seen the other  productions. I can’t comment. However, I shall claim that this production will be an eye opener as it is a seminal approach at doing Shakespeare.

Qn:. Do you think Shakespearean plays are still relevant today, especially to Malaysian audiences? If yes, why? If no, how is this so?

Ans: Like it or not, Shakespeare is world heritage. He is a good story teller, therefore, he is relevant to-day. His themes are universal. His plays are relevant to Malaysia, of course.The relevance is there. Whether we would reach out to it is a different matter. It is like asking a person who has not seen a play to see one. The standard reply is I don’t think I would like to see a play as it is boring and I have not seen one. Many people have the perception that Shakespeare is high brow and difficult to understand. He is consigned to academic study. Only students of English Literature may understand him. Not true. He is foremost a story teller and an excellent and engaging one.

Of course, like all plays, good actors are required to convey the story. If the actors are not good, then any play would be uninteresting.

Qn: Many directors use adaptations of Shakespearean plays as a strategy to pull new audiences into the theatre. Would Macbeth be the same? If not, how would your production of Macbeth be made more accessible to the Malaysian audience?

Ans: The heart of the matter is that I would like to do the play again and again, but I do not have the resources to do so. Also, I do not have the actors to stay with the production. Ideally, if all the actors are paid professionally, then it would be a different matter.

Qn: End of 2015 and 2016 saw attempts by the local theatre community in presenting good and notable scripts. Do you think the Malaysian theatre scene is experiencing a transformation?

Ans: The theatre in Malaysia is transforming rapidly with a few young people with the drive to write plays and stage them. This is a good sign. It has come to a point where one could do any play now, foreign plays, and we have some home plays to stand up to comparison. I recall in the late 1980s when a certain critic lamented the dearth of local plays saying that the only local play in English one could see was Lady White written and directed by me. Also, there is a strong Chinese language theatre that has emerged.

Most interestingly, the younger playwrights are not faced by the question of what it is to be a Malaysian playwright. They are Malaysians, in any language, writing about their personal lives, exploring their personal and national psyche, tapping into life.

Qn: Many people say that Shakespeare is only for schools, more specifically their literature classes. Is marketing your show to schools your main strategy? If yes, is this a good sign? If not, why do you think this perception came about?

Ans: I do not have a professional company to market any play  to schools or otherwise.

Qns: Back to the production, will Macbeth be presented in Chinese opera costumes again? If yes, what is the artistic significance of such an artistic strategy?

Ans: Too expensive to do so. The costumes are expensive.

Qns: Do you think young people are still keen in watching a Shakespearean production in contemporary times?

Ans: It is not a Shakespearean play that is in question. It is a question of whether they are keen in seeing plays. The small converted numbers are there, the majority of the unconverted remain unconverted.

If you want to catch the Cantonese opera segment, please book your tickets here.

Lo Mio and Chiu Liet and Home – Transitioning from one language to another to build a common imagination in Malaysia
Butterfly Lovers – a bodily experience about love.