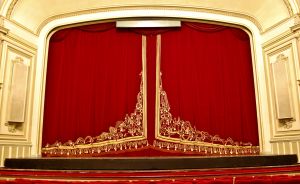 I can’t help feeling a little cold after attending Drama Box’s forum on the decline of Chinese audiences attending Singapore Chinese theatre last Saturday at the Esplanade Library. Panelists Ng How Wee, Quah Sy Ren, Chew Boon Long, Han Laoda and Kok Heng Luen spent half the time unpacking the highly problematic forum title – “A potential 3-million consumer base attracting only 3,000 audiences. What has happened to the Mandarin Theatre scene in Singapore?” The discussion kicked off with Lianhe Zaobao arts correspondent Chew Boon Long querying on how the figure “3000 audiences” was derived. According to him, there are definitely more arts activities in Singapore these days as compared to the same scene years ago. Theatre productions are on the rise. I believe the number of people going to the theatres is on the rise too. What’s the demographic scale of the “3000 audiences” Drama Box was talking about? This statement definitely needs more qualification. Next, the term Mandarin Theatre in the title, is both a romantic notion of the past and an unrealistic representation of Singapore theatre in the new times, a point I would like to focus on in later parts of this essay; talking about getting more people to “Mandarin Theatre” as an act of positioning Mandarin Theatre as a cultural victim to successful commercial theatre is not an effective strategy.

For the make-up of local audience is different in present times. Today, audience members are open to watching English, Chinese, Malay, Indian theatre, and theatre presented in other languages. This is a common sight in the film scene, where Singapore audience watch foreign language films with equal interest and enthusiasm. They belong to the generation called the “Z-Generation” (http://en.wikipedia.org/wiki/Generation_Z). How do we translate Mandarin Theatre to them? Should we ask them to embrace the beauty of Chinese language and culture, through understanding the great Chinese civilization, through appreciating Chinese Opera, or the great works of Cao Yu and Ba Jin? Even China has a great challenge in doing so – we see multiple re-stagings of Peony Pavillion using young actors in China – how could a few theatre companies in Singapore overcome this larger problem? Or, should we even bother to tackle the problem? Is it relevant to Singapore; such a culturally fragmented country. A country where all languages enjoy equal status. Over-emphasis on one language will inevitably lead to the privileging of that language over others. It is highly political.

Generation Z audience members are culturally diverse. They are armed with tools such as Google, where information could be obtained a search away. Forums such as the one Drama Box organized over the weekend could be a thing in the past. Online discussions are vibrant; though not necessarily on theatre in Singapore. I appreciate Drama Box’s noble intention in wanting to get theatre discourses going face to face in a real setting (the Esplanade Library). But this is absolutely unnecessary in the eyes of Generation Z people. What’s left is a theatre company’s desire to hold on to something that no longer exists; drowning in nostalgia and romance. This was clearly shown through the words of panelist Han Laoda. He reminisced the days when Chinese spoken drama was at its peak, led by a man who could speak beautiful Mandarin called Kuo Pao Kun. He spoke passionately on the rise of a Chinese theatre company The Arts Theatre in Singapore, and the various Chinese spoken drama events fuelled by the need to reclaim the so-called “Chinese-ness”. Most importantly, he professed he used to belong to the group of people who rejected English Language. Yes, this is our history. We should remember and acknowledge it. We should also accept the fact that it is history.

It is history looked upon with a great interest by the people in Generation Z. It was clearly shown through conversations between moderator Ng How Wee and panelist Han Laoda, where Ng Hao Wee quzzied Han Laoda on the then Chinese theatre scene, in his quest to better understand the Chinese-elite of the past. To me, Ng How Wee – an effectively bilingual teacher, graduated from the prestigious Beijing University, a Generation Z radio DJ sending Bossa Nova music into the airwaves in Singapore and a new-age Chinese Language playwright – is the epitome of the new Mandarin Generation Z bourgeoisie in Singapore, part of the new middle-class of professionals who could make decisions to catch performances in different languages without the fear of not understanding or being alienated by performances of a different language/culture.

These are the people local theatre will meet in their auditoriums in years to come.

Let’s face it. Humanity is on its decline. People don’t talk to people face-to-face anymore. This could be a figure of speech. But, to me, it is very real. Everything could be done on the internet. Singapore is well on its way to become a virtual country. It is already virtual in its make-up; sprouting out from a cultural desert and becoming a financial oasis within 40 over years. Our Generation Z population is on par with the rest of them in the world, but culturally deprived.

How do we – arts and cultural workers – go about addressing and engaging the Singapore Generation Z population? We see models adopted by commercial theatre companies such as Singapore Repertory Theatre and Wild Rice engaging them as entertainment entities with the hope of trying to make an artistic difference. We see late Kuo Pao Kun’s company The Theatre Practice trying to use the same model in making Singapore’s very own Chinese musical If There’s Seasons, through Leong Woon Fook’s Singapore “sinyao” music of the eighties, tugging at Generation Z’s nostalgic sentiments of the past. Such examples are aplenty, not just in the theatre scene.

Most of them are motivated in the name of profit and survival; little on cultural development.

To try sort out the above questions is to totally miss the point. The answer lies in what contemporary theatre could say to the people, or could reflect what people want to say. Many theatre companies are doing that, but not from the cultural development point of view, but from economics. Profits and survival are primary points of consideration. Their motivations are clear, too clear. It would help if they could place a bit more effort in developing culture, generating cultural capital and making people see with clarity what the world has become, under the very name of profit and survival. Only then, commercial theatre can shake its critics off their backs, unloading the burden of making money at the expenses of sacrificing culture.

As much as money in theatre-making is important, something we cannot ignore, it is a problematic element. The fervent pursuit for profit – going where the money is – is simply that. We borrow things from the past and appropriate them accordingly to fit into our productions, likens a bad cut and paste job. Audiences see that too. With this type of productions flooding the market, will audiences go to them, especially those who are highly informed?

Let’s put money briefly out of the equation for one paragraph. How do we go about engaging Generation Z audiences, besides wanting their money? Understanding Generation Z audiences is necessary. Generation Z audiences, as much connected to the world as they are, are lonely and intangible. By intangible, I am referring to a sense of anchor they lack, for they are still human beings needing companions. Man generates knowledge and progresses through time interacting and communicating with other human beings. They need connections. They need connections with their past (history) and a sense of what the future might bring for them. It is easy to get lost in the virtual world.

That pretty much sums up the Singapore arts scene; both the audience and the artists- lost in finding the real voice of the new generation. Generation Z audiences are looking for a voice to look up to, a voice to reflect theirs, a voice of their own. Similarly, artists are looking for someone to look up to – Kuo Pao Kun was the icon and spiritual guide in the past; now, we have drag queens who grace the local stages with curlers and blue wigs – someone who could bring out their voices and eventually, to have voices of their own.

Perhaps, it is not necessary for arts and cultural workers to do so much work, for audience members are unable to see the difference anyway. The Singapore middle-class is still attending performances, not knowing what they really need. This constant lack of direction and search fuels their need to attend more performances, hence allowing commercial companies to earn more money. But, deep in our hearts, we know this trend will not last.

The ultimate success will only come when we find our audience members constantly returning to the theatre to watch something they have a stake in. It is an everyday habit – as mentioned by Professor Quah Sy Ren in the forum – to catch theatre. It should be something akin to eating and drinking. As artists, we use whatever means we have – language included – to engage them, be it English Language, or Chinese Language, or any other language necessary. Kok Heng Luen, by relegating the privilege to English Language has in the theatre as an “immediate language people could associate themselves to” – has only touched the tip of the ice-berg. His statement is actually an irony; Drama Box is a bilingual theatre company that could also use English Language to engage the audiences. This statement is unfair. The responsibility is not English Language theatre’s alone. It is everybody’s duty to make good theatre, whether it is traditional or contemporary.

There is simply no time for romance and nostalgia. We are growing older by the minute. To me, contemporary theatre is the best word to describe what we – Singaporean artists – do today. To narrowly define our theatres into English, Chinese (Mandarin), Malay and Indian languages is purely sentimental. It is meaningless. Contemporary theatre should engage Generation Z audiences in finding what they need and living generations of the past in reflecting their current needs and affairs. Understanding the real sense of what “contemporary theatre” means in today’s new world is crucial; Singapore artists’ immediate task at hand.

评北京现代舞团的《觉》｜新加坡滨海艺术中心华艺节 2008
Homecoming, A Review of First Light, by Toy Factory