Homecoming, A Review of First Light, by Toy Factory 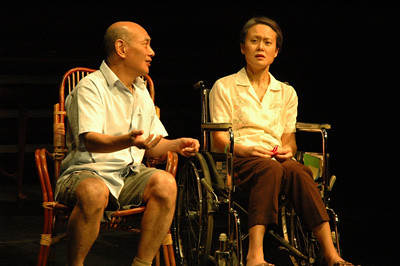 For me, watching First Light felt like homecoming. It is easy to fall into nostalgia and sing praises about the show – in fact, we should do that, for performances given by Lim Kay Siu, Neo Swee Lin, Janice Koh and Jalyn Han are simply remarkable- I am an informed audience, and also a friend/old colleague of director Nelson Chia. It is a struggle to keep this piece of writing objective. Writing it requires self-reflexivity, especially to keep nostalgia, romance and sentimentality from entering. In the course of doing so, I hope to juxtapose my personal experience in a wonderful theatrical encounter – Kuo Pao Kun’s Sunset Rise – with Nelson Chia’s contemporary version of it.

The arrival of First Light, in contemporary Singapore theatre, is timely. It is not only director Nelson Chia’s journey. It is also a time for Singapore audiences and theatre practitioners to re-visit a fragment of Singapore’s theatre history.

When talking about Singapore theatre history, one inevitably will have to mention late Kuo Pao Kun. This is especially necessary, for First Light is inextricably linked to Kuo Pao Kun’s Sunset Rise, a devised production under The Theatre Practice, directed by Kuo Pao Kun, in 1999 (Singapore Arts Festival). Both Kuo Pao Kun and Nelson Chia’s motivations were similar. Both of them used Taiwanese director Stan Lai’s Red Sky as the starting point to their re-creations of the play.

Kuo Pao Kun’s Sunset Rise had the characters speak in their own languages (dialects included). The original cast was made up of an old Cantonese-speaking woman, a Malay woman, two Indian men – of whom one of them seemed like a Eurasian – a Thai-born Teochew-speaking bi-sexual man, a mentally regressive middle-aged woman – played by Jalyn Han in the original production – and another who spends her whole life as a mistress to a married man. Nelson Chia’s First Light has had similar characters but with different cultural backgrounds. He made them speak mainly in English. This time round, we see a taxi driver, a grassroots leader, a wheel-chair bound old woman, an extremely eloquent English-speaking grandmother, a flamboyant actress, a businesswoman and a postman.

Character choices are an important part of a devised play. Every character should be note-worthy. Kuo Pao Kun created many firsts in that production. He challenged the then Mandarin theatre audience with moral issues pertaining to sexuality and monogamy (or, the notion of family), race and intercultural relationships, the personal and political, to name a few, through his choices. Nelson Chia, on the other hand, has rather weak character choices. They do not seem to provoke anything beyond old people problems. Even the only main topic Euthanasia was inadequately explored, let alone others such as the effects of Alzheimer’s, the need to re-capture memories so on and so forth. These weak choices, in turn, strangle the director and the cast in their improvisations resulting in 2-dimensional characters. This is particularly evident in Koh Wan Ching’s English-speaking grandmother and Mia Chee’s Euthanasia-induced businesswoman.

First Light came across as a play that wanted to say lots of things but ended up saying very little in the end. It is similar to Kuo Pao Kun’s Sunset Rise. But, why did Nelson Chia’s piece come across weaker than the former? No doubt, the creative process has been a difficult one; I could see Nelson Chia’s struggle in trying to stay focus on story-telling, moving the plot along, and yet trying to discover what Euthanasia and Alzheimer’s have done to old people – the two more prominent issues in the play as compared to a host of others, which paled in comparison.

We have to credit it to Kuo Pao Kun’s ability in the craft of – “saying everything by not saying everything deeply” on stage. Outline what’s at stake and not going too much into the topic was Kuo Pao Kun’s approach in creating Sunset Rise. He left the explorations into the issues to the audience. It brings forth the importance of liminal spaces between the characters, lines, text and subtexts in drama. These elements obviously have been inadequately deployed in First Light.

But, Kuo Pao Kun’s Sunset Rise – though brief in the major issues it has brought out – has its own fair share of criticisms too. Lots of people felt that the play was boring (mainly the younger audiences at that time) and draggy. It went round and round asking questions, not to mention translations of what it has been said in English and Chinese, again and again at different points in time. It seems Kuo Pao Kun’s strategy isn’t that effective either. For the amount of things Sunset Rise has briefly said are simply too long.

First Light almost suffered the same fate. Fortunately, Nelson Chia was too aware of this pitfall to allow his play to end up in the same predicament. In its place, he deployed songs and music to keep the audience’s attention. It is a good convenient choice, albeit a weak one.

If we were to look beyond the name Kuo Pao Kun in Sunset Rise, we would be able to see the essence of Sunset Rise: the relationships between the characters. Ramesh Panicker and Sasitharan’s characters – Joe and Bala – sharing a joke with each other, Joe’s offering of  Goreng Pisangs (banana fritters) to his friends in the old folks home, Oniatta Effendi and Goh Guat Kian’s characters – Saloma and Ah Eng – sharing a special moment when she, a Malay woman, stretches her hand into a Chinese woman’s mouth to remove a fish bone. These are lasting images in an audience’s mind. These images anchor themselves in something Singapore theatre is gradually losing as years go by – Humanity.

I am not saying that First Light lacks humanity. In fact, it has too much of it till it becomes a burden; a cultural burden.

Allow me to indulge in the next one or two paragraphs or so by speculating what was in Nelson Chia’s mind when he was working on First Light. Obviously, Sunset Rise was the anchor. Spirits Play, another play by Kuo Pao Kun on a gathering of ghosts of the past to talk about the war, has led him to putting the characters in the state of limbo, with images of Ho Yin Feng’s set design involving a hundred wooden chairs in Hundred Years In Waiting, a co-production between The Necessary Stage and The Theatre Practice in Singapore Arts Festival 2000, accompanying it. Music pieces were also chosen with Kuo Pao Kun in mind, ranging from waltz tunes used in Sunset Rise to the Chinese folk-song《望春风》.

It takes great humanity for an artist to put aside the risk of being criticised for doing a “cut and paste” job to placing things he admired and respected on stage without much appropriation. I respect Nelson Chia deeply for doing so.

First Light seems to be Nelson Chia’s exercise in consolidating what he has experienced and learnt through the years. I sincerely hope this will not become a burden to him. A new voice needs to be heard. Not the one Kuo Pao Kun had, the voice(s) that follow after him. Viewpointing and Composition, training methods employed by American company SITI, are just tools a director employ, liken to that of Mnouchkine and Declan Donnellan.

But, all of them, have one thing in common – to critically look at life, and to embrace humanity in their theatre practice.

Lastly, I would like to congratulate actors Lim Kay Siu, Neo Swee Lin, Janice Koh and Jalyn Han for their outstanding performances in First Light. In the beginning of the review, I said we should praise them for their performances. Praise should not just be as simple as a good performance. Good performance is the basic standard an actor should produce before an audience. But, these actors have shown, in their own ways, what humanity is about; every inch of their skins has shown us what the characters have been through in their lives. They have reinforced my belief that plays like First Light should be played by actors of a certain level of maturity. That was also the strength of Kuo Pao Kun’s Sunset Rise: A ensemble of strong actors.