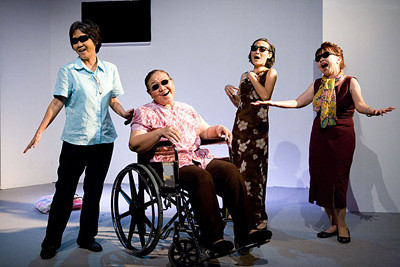 A question bugged me throughout the performance of Catching Adam Cheng – a play written by playwright Jacke Chye about a journey a bunch old ladies make to catch their idol: Hong Kong singer-actor Adam Cheng – Is there a way to make the characters more believable on stage? The character I would believe in should be “the person”, in his/her full glory and dilapidation.

The playwright hasn’t got an easy task. He has many concerns.  A story needed to be told, a message needed addressing, voices to be given to the characters, just to name a few. All them to be done in a continuum not allowing audience to lose a single moment. Catching Adam Cheng was a good exercise. But, from the way it was written, Jacke Chye seemed to have misunderstood writing for theatre for writing for television. Catching Adam Cheng would function well as a Sitcom, but not a theatre production. One of the challenges this script gives to the director is the need to constantly have “black-outs” on stage, for “sets” (in a television set sense) need to be constantly changed in order to present a new space and time. Too much of it breeds predictability. When audience is being massaged into such a routine, breeding complacency in thinking they know the play, they naturally get sedated and the play risks becoming a play for itself. Another challenge the writing poses to the director and actors is the way lines are written. They are generally spoken at a meta-level. When lines are written at a meta-level, likens to the voice of god, they become didactic, eventually end up as proclamations. In fact, it would be better if the lines became proclamations, for politics would definitely serve more of an interesting read than a series  of indecipherable murmurs on stage.

There is a need to consider theatre time and space when writing for stage. They inform the playwright the size of the canvas he is working on. Another, the quality of voices the characters make on stage, where authentic voices take their place in the world the drama creates.

A playwright needs to distance him/herself from his/her piece of writing. It is necessary. Romanticism and sentimentality foil plays most of the time.

Teo Bee Choo, a patient suffering from Dementia; Veronica Seow, a hapless English-educated romantic; Chew Peng Peng, a seemingly not conservative Chinese woman from the 50’s in Singapore, and Tan Swee Lin, a member of the working class Singaporeans – all form part of that Singapore cultural and social milieu of the 70’s. Each and everyone of them is a part of that forgotten period. Each and everyone of them represents a part of Singapore history in the 70’s. Jacke Chye’s play has a potential of addressing that part of Singapore history – where Adam Cheng was the Jay Chou in the present times – the time when sword fighting films deliver more credible fighting sequences than the ones filled with CGI effects today; where Adam Cheng’s songs from Swordsman Chu to the Romance of Book and the Sword talked more about Asian morals, righteousness and friendship than television reality shows that focus more on showmanship, vanity and self-centeredness.

What are the parallels these characters draw from Adam Cheng other than his good looks  and voice?

This is where the common destiny the audience of that time and the play lies. It is not about Barbie dolls – the beginning of the materialism and the decline of humanity – it is about what we have lost as time passes by. The struggles the voices of Teo Bee Choo, Veronica Seow, Chew Peng Peng and Tan Swee Lin have in staying afloat while trying to remain visible. Carena Chor and Beatrice Chien, though technically weak in performances, have given the most authentic voice of that time.

Homecoming, A Review of First Light, by Toy Factory
Do Not Disturb, Late Checkout, Please | A Review