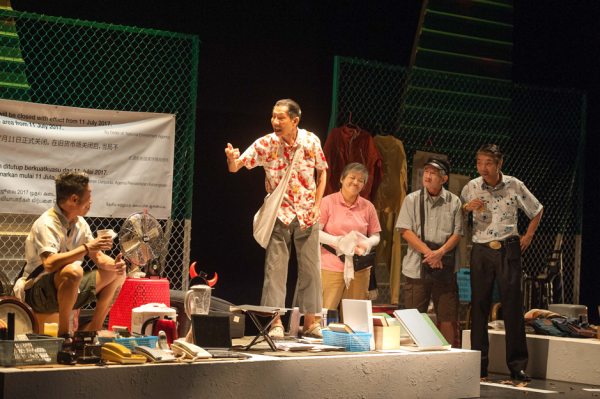 One Metre Square: A Good Reportage

One Metre Square is a good reportage of the events that reflect the plight of the vendors of the former Sungei Road market since its closure by the Singapore government. Director Zelda Tatiana Ng used simple theatre direction to systematically and logically lay out the characters, their stories, and their voices; the statements of the government officials; the positions of the activists, citizen journalists as well as social activists concerned in the matter in Singapore. Half an hour into the show, I could detect the pattern and motif of the direction. The stage was symmetrically split into two. Lighting was uniform and in equal portions. There was no change in setting till the show moved into the second part. Vendors started packing up. The zinc pieces were flown and moved out of the proscenium stage, leaving the stage relatively bare for the actors, a staging trap for most stage directors, for there would be little to ‘show’ in the second half of the production, except the actors.

Clutter was the main aesthetic for the piece. In a Chinese stage-play tradition, the production had to rely on naturalistic props in order to portray naturalistic acting. The style was reflective of Chinese stage play in the late nineties and early 2000s in Singapore. The actors also took on acting strategies branched from method acting to showcase their characters. They enunciated their lines well. It was reminiscent of how late Kuo Pao Kun would get their actors to do in classical Chinese plays from China, albeit adapted to Singapore sensibilities. Naturalistic direction strives to portray characters in their most authentic selves. All with the exception of actor Michael Tan, the skillful actors nailed almost every pitch and tone needed to naturalistically portray the characters. However, unfortunately, at an emotional level, only Michaell Tan has managed to capture hearts and minds. He might be ‘the character’ or just ‘being himself’. I do not know. At the very least, I am convinced of his portrayal of the vendor that felt that “money isn’t enough”.

Small monologues were used to present the voices of the vendors in the second half interspersed with statements from the government and activists. The choice of using theatre form monologue works against the proscenium staging of the production. Building intimacy is a big challenge, as most audiences around me were too busy engaging the production at an intellectual level. In fact, two old persons in front of me (presumably vendors) were discussing how they felt as the stories unfolded on stage. There was a lack of theatrical experience. Naturalistic acting could have enhanced communication, but it was the distance between the stage and audience that cut away engagement. However, there were a couple of gems in the lines. Two of them were delivered by actor Yong Ser Pin (Uncle Ang). Uncle Ang emphasised on the importance of “knowing history” in Singapore as well as touting that the activism for the Sungei Road market vendors is part of “a larger struggle”.

An important question that comes to mind is the purpose of the dialogues and proclamations in the production. Are they meant to be just complaints or persuasion? I couldn’t detect its purpose. It was a pity that most of them formed part of the cacophony of complaints by the vendors revolving around themes on money, rental, livelihood, space, community, to name a few. Sparsely used metaphors did not help in leaving lasting impression with audiences. Songs such as 望春风 (a well-known Chinese folk song) served as mere decoration, like the strewn pieces of old goods at the edge of the proscenium stage.

Statements from social activists such as Woon Tien Wei, citizen journalist Kirsten Han, and professional opinions of Huang Zi Ming were rather decorative too. Intellectual understanding versus emotional affection are in conflict. Audiences are expected to digest intellectual terms such as ‘cultural memory’ while responding to the emotional outpouring of the characters. It was confusing. At the end of production, even though every audience member was clear of the situation vendors are in. The level of understanding is similar to someone who has been following news reports on the matter. What other insights could we glean from the production?

Perhaps critiques levied at the media could be one insight in the play. Media coverage on the plight of the vendors was initially active but died off in the end. Was there an intelligent guess on why it happened? Did the media feel that the issue was no longer newsworthy? At the end of the production, writer San Mu made an appeal that activism is still going on today. He appealed for audience’s support for the vendors. Are the audiences convinced? Like any other redevelopment projects in Singapore, Sungei Road vendors are not the only ones affected by changes in government policies. The larger issue relates to the politics of policy formulation and implementation, which the production did not seem to touch upon.

Lastly, what was left with the audience in the last scene? What does the confetti of note papers containing statements and positions of stakeholders mean? Was the lining up and exiting in one straight row by the characters a sign of resignation, defeat and conformity to the state policy? What does it mean when Mr Koh (played by actor Tay Kong Hui) looks back in ambivalence? All these questions remain open at the end of the production, leaving the audiences with mixed feelings.

Theatre and Breaking: Dead was Theatre till Taught it How to Break | A Response
3. Voices of Sungei Road