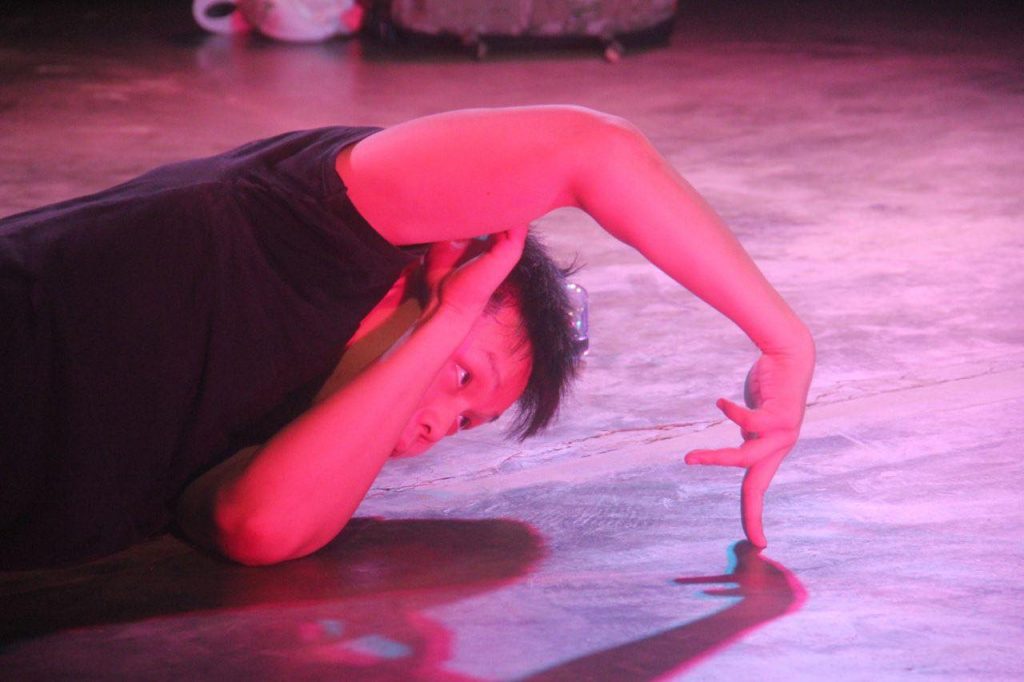 Theatre and Breaking: Dead was Theatre till Taught it How to Break | A Response

Performer Dominic Nah instils audience confidence at the beginning of the show. He grooves to the house music, a contemporaneous piece that hints on possibly an unusual narrative about a street dancer. Obviously, Nah is trained. The setting is theatre-in-the-round. He will be open to everybody view. It is rather difficult to hide. He sets his Go Pro camera in front of him. He is ready to be recorded and watched at the same time. With all these ingredients in place, dead was the body till i taught it how to move sets audience expectations, there might be dance and music. Most importantly, the piece seems to want to give us another perspective to a Singapore b-boy. Unfortunately, dramaturgy is narrow as it chooses the form of a monologue for the whole performance, giving up the great theatrical potential the setup has, aesthetically.

Rather than exploring how the theatre space could be used to create a theatrical experience – the environment and landscape of breaking – Dominic Nah decided to ‘tell’ his story rather than to show. As Dominic referenced in the performance: “You are the only one moving it.” That was the essence of the production: You are the only one moving in life. Life could be similar to how you ‘move’ in break dancing. Dr Gap(?) ‘s advice on break dancing as fireworks could be an excellent theatrical aesthetic metaphor for the production. Again, I digress. However, he gave an earnest and grounded performance of his life story, from the relationship among him and his parents, to his scholarship studies in the University of Warwick and subsequent joining and helming the Warwick Breakdance Society, to his sojourn to the Bronx in America, to his letting go of his negative feelings towards his father. As a monologue, he did not fulfil the requirements of a good monologue performance; however, the production can achieve more than just a text-driven and long-winded spoken drama.

The music pieces used in the production serve as breathers for the production. Not only they provide context, the larger function is to allow us to enter the world of breaking. I observe some audience members moving their bodies to the beats. That is indeed a small but valuable transformative moment. Mentioning breaking legends like Kent Swift might ring a bell to the breaking community, but they are just names to the rest of us. Names do not move us as much as what the person’s deeds do. The impact of Ken Swift’s legacy on Dominic Nah is a much more engaging watch. Perhaps these influences could add more texture to his solo breaking sessions while family members are sleeping. Perhaps the impact Kent Swift or Dr Gabz Break Dance Club has left him could be Dominic’s inner drive to protect his mother and brother Damien from his father?

There are also several instances where attempts to break out of the monologue form serve little purpose. By telling the audience that the performance might give more than what the flyers have promised, and initiating audience interaction at one point in the performance, they don’t mean anything to a detached audience. Audience members who do not share your sensibilities and aesthetics. Continuing to speak the lines further will only alienate audiences. For there is an urge to provide more and more context to the ‘discussion’ on stage. Self-deprecation is also weak. Every line of self-criticism seems like attempts to hide the flaws of the performance, which is different to different audience. However audiences ‘know’ whether you are emotionally secure by just looking at you and your body.

Dominic Nah is most comfortable when breaking. The various dance routines not only bring out the repressed and lonely Singapore boy, as he is, but also the huge effort this boy has put into breaking in order to be a ‘good’ boy meeting personal and breaking community expectations. His excessive anecdotes of good experiences in The Bronx are essentially external projections of Dominic Nah’s emotional and spiritual desires: To be recognised by the breaking greats and legends that he can make it – a personal emotional solace.

Finally, presumably could be the most moving part of the show, his accepting father’s final departure through a simple gesture of letting the mineral bottle roll could possibly end it. Unfortunately, it did not. The switching back and forth between his stay in The Bronx and his emotional journey at home drags the production further losing audience’s interest and focus. But I am glad that the production ended with a piece of music by Jimmy Castor Bunch titled It’s Just Began. Dominc Nah’s set to this music of music is trance-like, totally in his world. At that point, audiences begin to move into Dominic’s world. To me, that’s just the beginning to the real breaking experience.