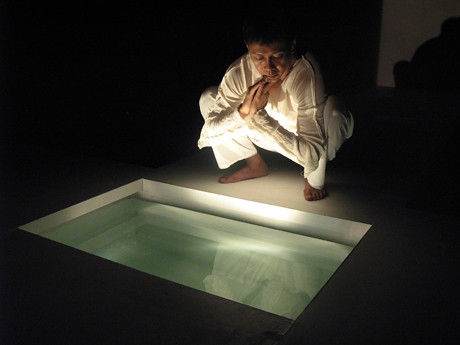 Right at the end of the performance, when the sarongs actor Gani Abdul Karim placed in the pool of water on stage slowly sinked to the bottom, it seemed like a form of closure. But, to me, it was the most significant moment for both the actor and the character, both the same. Gani Abdul Karim was playing himself on stage, his story, his life.

That’s confessional theatre, most probably one of the most powerful solo theatrical performances on stage. For it is difficult to pinpoint any faults, less to make a critique on it, for everything personal and confessional will move an audience, if you have a good story to tell. Good story – an irony actually – usually highlights one’s own conflicts and struggles in his/her life. Salusuah, a monologue presented by Play Den Productions, a new 3-year theatre incubation initiative jointly developed by Orangedot Productions and The Arts House at Old Parliament, directed by Artistic Curator Jeremiah Choy, is a story about a Malay boy’s – most probably Gani’s – growing-up journey with his grandmother and father.

A consummate actor as he is, Gani Abdul Karim painted broad brushstrokes of his life through dance and movement, something he is known for, before telling his story through a mixture of text, voice-overs, multimedia projections, and most important of all, the silences.

What sinks in with me most is his/his character’s devotion to his religion. Gani Abdul Karim’s use of voice and sounds, not to mention the reading of the verses in the Qu’ran – in the words of my friend who watched it with me – is simply beautiful. To me, the beauty of it encompasses aesthetics beauty with humanity and faith.

This experience is in great contrast with my earlier one in another performance in the same space involving references to Buddhist Bodhisattva Avalokiteśvara, commonly known to the masses as Guanyin; where religion becomes an item of external criticism rather than a personal reflection of one’s own spiritual existence and strength.

I am not against discourses on religious matters, for it is a worthwhile intellectual activity. But what moves audiences in the theatre, on a personal level, is one’s own relationship with the religion, how it helps him/her get over the challenges in life.

Salusuah has definitely done that for me, even though I am not a muslim. I am just a human, listening to another fellow man’s story, trying to overcome challenges of my own.

Ah Kua Show, 6 – 8 August 2009, The Substation Theatre
A Story of a Singapore Writer Going to Kuala Lumpur to Catch A Theatre on Delusion.