A Story of a Singapore Writer Going to Kuala Lumpur to Catch A Theatre on Delusion. 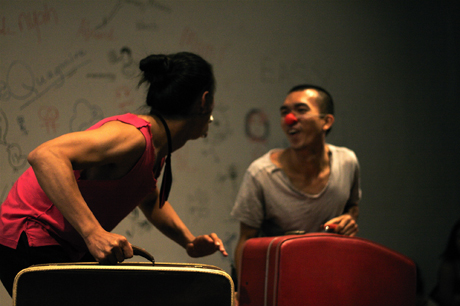 The review has been written for Singapore art magazine Confabulation (http://www.readconfabmag.com). It will be published in January 2010.

A Singapore writer travelling up to Kuala Lumpur, Malaysia, to catch a theatre production that dealt with Delusion harbouring the idea that theatre in Malaysia was more real than the ones in Singapore was in itself a deluded affair. As if there was a difference between delusion and reality on both ends of the causeway. After watching the production, what the writer said of Malaysia theatre collective, managed by Loh Kok Man, Pentas Project’s The Year In A Word: DELUSIONS was that when artists got all involved in making theatre, the world seemed to stop revolving around them. On the face of it, the writer seems to have given a bad comment, but on closer look, it might prove otherwise, especially through the eyes of a deluded theatre writer.

Ling Tang’s Words: Delusion played by Kathy Tan and Moo Siew Keh was one that clearly stood out of place. The piece was presented in a realist-absurdist fashion – of which the juxtaposition between the two in a same piece of theatre is already problematic – where two clown-realist-characters lived in a same space reflecting the lives of normal people in everyday life. That piece of work is a reflection of what Chinese art and theatre is going through today: The inability to let go the realist allowing the absurdist in. And it was in contrast to the next few pieces of theatre where absurdism become totally disjointed with the real issues in general life. Ruins and Rancang — though effective use of metaphors and allegories allowing audience members to see and feel the angst of their concern on the politics of space and people in Malaysia – were works that focused too much on form rather than content. The choice of Octavio Paz’s poem in the former piece did not provide the writer with any additional understanding to the piece of theatre. As much as JacAL Map was technically adept at providing soundscape for the piece – and other subsequent pieces as well – and they were good, they were unable to bring out the humanitarian concerns of the said 1990 Nobel laureate in Literature on the people of Mexico suffering from state repression. One fundamental question looms: What has that got to do with Malaysia? Another fundamental question for Rancang is: What is the function of the strategy of repetition in the piece?

Before the writer could find the answers to the questions, then came Jo Kukathas and Edwin Sumun’s piece on Quantum Physics. The writer seriously didn’t understand what the piece meant, but it seemed to be asking him to follow a certain direction of thought to having a certain kind of perspective. This form of theatre – replete with near faultless English elocution – is sexy to watch, but a dangerous delusion to follow. Like a deluded lower middle-class worker looking forward to a higher middle-class life, this near-elitist theatre where the English Language held hegemony seemed to give hope to the one following right after, as they were burning in the purgatory of life. Cauterise was a piece of physical theatre directed by Malaysian theatre veteran Soon Choon Mee. More physically -aware Amelia Tan came to fore with her Asian theatre training as compared to a weaker Eagle Lee. Unfortunately the life of the bodies was short-lived for the theatre piece was largely hijacked by the superb video animation consisting of outlines depicting humans in motion by Au Sow Yee. A convenient form of delusion provided for humans by technology.

The writer ended the evening’s performance with a rather sober and sombre note with Loh Kok Man’s clown theatre entitled Hope-less and Mark Teh’s participatory performance Sudden Death. True to the art of clowning that specialises in making a satire out of general life, the two clowns performed by Low Shee Hoe and Boyz Chew Soon Heng proved to be the only lucid act in the evening. As they parodied life, the writer was thoroughly entertained with a stark reminder of what was in reality. And it seemed that the reality was the political. Sudden Death was a performance created in memory of Teoh Beng Hock. From Mark Teh’s statement, the writer could see his humanitarian concern of over 1,805 individuals who have died in Malaysian police lock-ups, prison and detention camps since 2003. As a deluded writer, he refused to take part in the last performance.

Having taken some time reflecting on what he had seen, the writer constructed a narrative with the 7 stories. Did the creators provide him with the narrative, or was it a story of his own? It did not matter, for the narrative provided him with answers he wanted to know, or he ought to know, or he might want to know; most importantly, he should know. The writer, being a lucid observer to what’s going on in society, realised that all problems tended to point toward the political.

Politics between human beings will forever be present in this world, just as politics occur in our own bodies, be it physically or intellectually. But what do these politics leave us? Are we better off or worse? The answer seems to be the latter. But sometimes the tension from these politics will also lead us to split ourselves up, like a schizophrenic, to critically evaluate judgements made in delusion or lucidness.

To the writer and I, that makes writing theatre as alive as theatre itself being a space allowing participants, both on and off stage, to put things right. So, to respond to the writer’s view on artists acting as if the world had stopped revolving around them while performing their pieces, I think it could only be done in delusion, as what Pentas did in DELUSIONS, what I did in writing this review; which is good, but not too long, I hope. The truth is – and we all know it – that in reality we are unable to do so, for the earth will never stop turning.