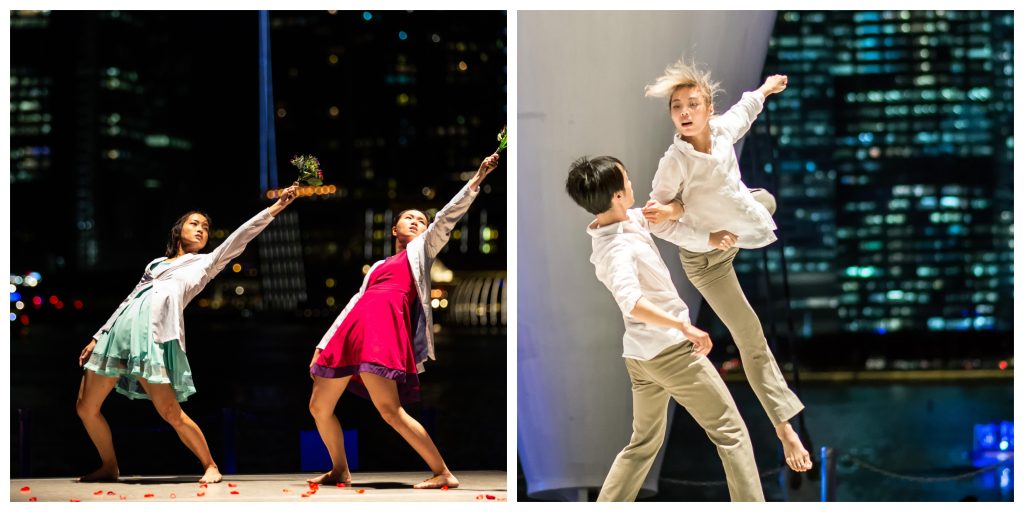 To me, we see the thoughts and emotions of the choreographer in every piece of work, even if the work focuses on forms in which it tries experiment, subvert or develop. If a choreographer has a direction, or most of the time I say aspiration, the work will speak for itself. As a writer of dance, I allow myself to meet the work for the first time every time and have a conversation with it, as Rustom Bharucha referred the process to a tourist, who most of the time is ‘instinctively right’ (1984). 1

Watching Lee Ren Xin’s She’s Chinese And I’m Twenty-Five is a pleasure. It is reminiscent of every little conversation I had with her while watching her at work on stage. The movements by the female dancers intimately conveyed what constantly was in Ren Xin’s mind: a Malaysian Chinese living in the socio-politically challenged place where race is being politicised daily. Ren Xin’s squats have become a style of its own, a subversion to the notion of a well-dressed, demure Asian girl, most likely her personal protest. Through games and fights, the dancers gave a truthful rendition of the inner and external emotional conflicts of the choreographer. In short, the piece comes across as a personal statement on how a Malaysian girl is being socially and politically oppressed as she grows up. This little work might not speak of worldly issues, but from the personal, it offers a glimpse of the physical and emotional condition of a specific group of people in a society.

In the second piece Organised Chaos by Kuik Swee Boon and Kim Jae Duk, having seen its premiere in 2014 at the Damansara Performing Arts Centre in the Malaysian city Petaling Jaya, I am convinced that the two choreographers are strange bedfellows. You could sleep on the same bed but worlds apart conceptually and emotionally. Essentially an experimentation in form, the dancers made and moved to the sounds on stage, using a harmonica, microphone, feet thumping and hissing breaths. Occasionally, dancers speak, be it counting in the Chinese dialect Cantonese, or other insignificant words.

4 years on, the same feeling lingers, every dancer moves under the instruction of the choreography and not with the choreography. Each movement talks over spectators making its point that it is in fact a ‘cool’ experimentation rather than the wonder of sounds around us that could dance. “Organised Chaos seemed like an arbitrary assemblage, an assortment of parts randomly tacked on to one another” (2014), as Straits Times writer Lisabel Ting observed, stays in T.H.E Dance Company’s 2018 offering at the outdoor theatre in The Esplanade. Ting has also made a pointed observation in Kuik and Kim’s choreography, “While there is beauty in chaos, there is also beauty in symmetry, structure and form. Organised Chaos needs to find a way of striking a balance between the two, to piece together its electrifying parts into a cohesive whole” (Ting, 2014). 2 Kim’s style seems to be an embodiment of chaos; Kuik’s, symmetry, structure and form. From Kuik’s background as a former dancer with the Singapore Dance Theatre for many years, I could easily understand the habitus and dance training he has been nurtured into.3

After the performance, the moderator mentioned the importance of ‘breath’ in coordinating the dance movements. In the choreography, it is the only thing that connects and reassures the dancers. The bodies on stage are not instinctively in unison. Each movement that ‘shows’ chaos is devoid of natural flow. For one, the natural rule of Cause and Effect does not apply to the movements. Apart from Anthea Seah and Ng Zu You, whose duet embodies natural harmony, Kuik and Kim’s choice of dancers for certain parts seems problematic. For one, the use of dancer Brandon Khoo to execute leaps is a bad choice. His tall and lanky body simply defies gravitational pull as he leaps. To ask of him to reach certain parts of the choreography is a tall order, not to mention that his body quality is totally different from the first generation of dancers who performed the same piece in the 2014 premiere. These are some of the symptoms of an artistically conflicted working relationship.

Instinctively, I would like to trust what I see and feel in choreographies, like the emotional journey of a Malaysian girl in the piece that precedes it. Writing ‘instincts’ is the most difficult form of writing for there is a need to reflect upon what’s belief and truth verses facts. The belief for truth is a leap of faith for any writer, and the facts must assist to support them. Unlike a piece of descriptive review, a writer who strives to articulate bodies needs considerable ethnographical evidence and observation to make sense of the phenomenon on stage. In Singapore, writing about T.H.E Dance Company is a good exercise, for the company works hard and strives to improve itself in every single dance piece, albeit with artistic challenges. The hard work of its dancers is testament to a diligent dance scene in the making. I hope that this response could bring about more meaningful artistic conversations in the Singapore dance community, upon which I could learn from and improve myself with.

I would like to express gratitude to Kuik Swee Boon and the T.H.E. Dance Company (Singapore) for making the following clarifications:

In view of this, one sentence has been removed from the review.

From Orientalist Views to Misread Data
Theatre and Breaking: Dead was Theatre till Taught it How to Break | A Response