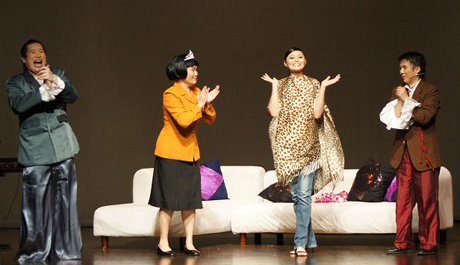 The review has been written for Singapore art magazine Confabulation (http://www.readconfabmag.com). It will be published in January 2010.

The closeted intellectual bigot in me told me that it would be meaningless to write a review for Chestnuts (a mainstream play), for it would have nothing for me to write about, except for frivolous acts STAGES made at the expense of others. It is with this hypocrisy I held to my heart, I was finding ways of justifying my paid trip to STAGES’ Chestnuts 2009 on 29 November: from the inane reason I wanted to know what STAGES had up in their sleeves, needing a good night’s out like the middle-class, to supporting my friends Jonathan, Terence and Keng Kiat. But I never wanted to admit that I loved the production. The truth is I am secretly in love with STAGES’ Chestnut series. I have watched many of them in the past, but never wrote down my reflections on them.

This time round I feel compelled to write, not just because the show is simply too good to be left unwritten, but that I need to come out of this self-imposed ideological closet – theatre should contain messages, poetry, art – and start living life again.

To live life is to enjoy its diversity.

I enjoyed every part of Chestnuts for many reasons, the strongest of which is to see others being ridiculed on stage. It is an extremely satisfying experience for a theatre reviewer, and as an audience member as well. For Chestnuts kills bad art/theatre on stage and bad people in society. However my hunch always tells me that this is not exactly a good way of enjoying theatre. I believe that quality enjoyment only comes after the initial laughter – experiencing a form of realisation or revelation from the section/joke on stage. In Chestnuts 2009: Mary and Joseph’s Christmas Safari, I finally got it: quality enjoyment I have always hoped for.

And that gets me moving. For the review is not about how good veteran actors Judy Ngo and Jonathan Lim acted on stage; not about how promising actors like Tan Shou Chen and Dwayne Lau becoming better on stage; not about old acquaintances like Teo Kiat Sing and Edward Choy in theatre that should appear in local theatre more often. It is about the lives of people they present on stage.

From virtual to reality – Dicken’s The Christmas Carol to Singapore’s very own Ris Low’s Christmas show on Pondan Newsasia (a parody on Singapore’s Channel Newsasia) – the plight of these characters was played out to audience’s laughter in Chestnuts. After all that, the question looms: what does the performance leave us?

It leaves us with these realities: The Christmas Carol reminds us that capitalism is here to stay; Amy Chua – on the existence of censorship in Singapore; Ris Low – how easy it is to become a one-hit wonder, enjoying brief moments of fame. In addition, Christmas carols by the Church of Suckers reminded us what fundamentalists could do to society; parents breaking into a gay son’s party — on the need to promote reconciliation within families of sexual minorities in Singapore; the ever so tongue-in-cheek nativity play with Madonna’s classics that borders on being sued by religious hardliners for sedition against Christianity.

In every respect, this show lends itself to state censorship. But since it is a form of entertainment – Jonathan Lim’s cross-dressing stance is akin to mainstream television channel 8 TV host Zhou Chong Qing’s Auntie Lucy on TV – just for good fun. Singaporeans love them, without recognising the portrayals of reality behind them.

Perhaps it is time for all of us to move out of our own closets to recognise the facts, and not judge them with coloured lens; embracing and recognising them as part of the Singapore society. As a Singaporean theatre reviewer, I think I have more than one closet to get out from.

A Story of a Singapore Writer Going to Kuala Lumpur to Catch A Theatre on Delusion.
Artist Sharing Session by Chen Tong, interpreted by Richard Chua (Mandarin and English)