Naturalism in Theatre has its Relevance in Shaping Human Experiences, through Design and Stage Blocking. 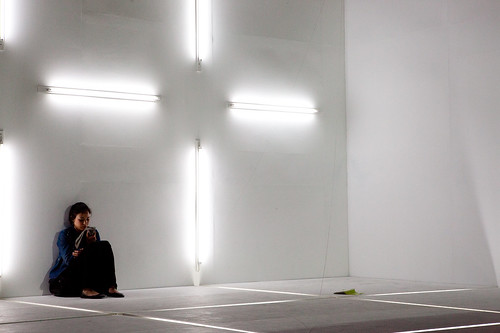 Naturalism in Theatre has its Relevance in Shaping Human Experiences, through Design and Stage Blocking.

The never-ending debate on whether design and art could co-exist is still going on; mainly in the struggle between the definition of the terminologies in creation, for one focuses on the function of the creative piece of work, while the other the creator’s relationship with the world around him/her. It is in trying to reconcile the differences I initiated this conversation with fellow colleague in the Lasalle College of the Arts Edith Podesta on her most recent art-work (I deliberately chose this term against “drama”, “play” and “production”) Eurydice running from 6 to 8 September 2010 in the flexible performance space in the college campus we both worked in. For I posited the question, “Using a highly designed theatre space adds aesthetic value to the piece, but it will also draw criticism, with the main charge being “become overly pretentious”. On the other hand, every self-respecting theatre artist will know, whether the piece of theatre is pretentious or not, lies in the experience it generates for the audience, further put aptly by director Edith Podesta: audience experience should go back to the days of Shakespearean theatre where they should be moved by what they are seeing on stage, where the human experience is at its full.

Human experience is still the most crucial in the theatre, no matter how creative a theatre could be. But at which level, or what kind, of human experience should audience members have in getting the most out of a theatre experience? That’s a question that begs immediate reflection. Indeed a designed set piece nonetheless provides an audience a rather pleasant experience in appreciating the theatre at hand, but it will also distract the audiences, not to mention large amounts of projections, as the theatre in question used, deployed by the director. Edith Podesta had a very clear idea of that repercussion when she invited electro-acoustic artist Brian O’ Reilly on the project, where both his sound- and land-scape designs co-existed in the theatre piece. However distinction was clearly made through the use of lights, where the real world was represented with warmer lighting, while the under-world with more industrial undertones. In addition, guiding space demarcation in the piece was the journey(s) characters take in their course of existence. The set – a design born out of a collaboration between set designer David Li and Edith Podesta – had its merits, but it also posed challenges to the blocking of actors on stage. Claiming that her strategies in blocking the characters, as I will further discuss on her strategies in stitching the piece together in the next part of the writing, was rather naturalistic, rooted in the characters’ journeys in the piece. View-pointing – a strategy Edith Podesta deploys in her creation – informed her of where (the space) the character would be in a particular point in time, what (her actions and perspectives) the character would be doing after moving out from another space, how (her imaginations and emotional journey) the character would want to achieve his/her objectives etc. However it had to be carefully manipulated with the way the text was written by American playwright Sarah Ruhl. A terrain that needed to be threaded with care.

Sarah Ruhl has re-worked the myth into a play consisting of 3 movements, the start being both Orpheus and Eurydice coming together; the middle, apart; the last, together again. According to the programme sheet distributed at the beginning of every showing, Sarah Ruhl is very interested in the Eurydice’s experience in the myth. Her death seems to have deprived her of an experience. Another influence, it seems, is Sarah Ruhl’s reading of a poem written by Rilke called Orpheus. Eurydice. Hermes, where the poet “looks at Eurydice’s experience, at the fullness of her death when Orpheus arrives, with a kind of ambivalence. Rilke says she has become fuller, rounder, in her death.” (Ruhl, and Weckwerth 28-35) In her writing of the piece, she has deliberately written the scenes – with an strong emphasis on Eurydice’s relationship with her father – in a rhythm outlining the isolation of between Orpheus and Eurydice. That inevitably gives rise to the slow pacing in the middle part of the theatre piece putting the audiences in state of stasis. Blocking became a greater challenge for Edith Podesta. In response, Edith Podesta deployed a more nuanced approach in placing both Eurydice and her father in a space, sparing additional properties, purely using the actors bodies on stage. Hence blocking takes on a new function on stage, where the situation the characters are in become more character driven, more than anything else on stage. In that instance, acting becomes the key propeller in the blocking of actors on stage.

Here, strategies in Edith Podesta’s artistic stitchings between the scenes could be further studied. According to the direction, her strategy was pretty much “naturalistic”. Easy, enough. But in this day and age, where artists loathe the use and mention of the word “natural” and other variants, it seems naturalism still has relevance in crafting good theatre pieces, no matter how designed and art-driven they may be. In the earlier paragraph, I have mentioned her directorial strategy in using View-pointing – a system developed by Anne Bogart of SITI Company in New York – as a tool in opening up possibilities of blocking the actors on stage. One example of its use was the demarcation of the relationship between Eurydice and her room in the underworld. According to Edith Podesta, Eurydice is more constrained in her room in the underworld, more lonely; while outside the room, more care-free. Running along that trajectory, Edith Podesta used View-pointing to further explore Eurydice’s actions – be it physical, emotional and impulses – on stage. Through this, scenes depicting Eurydice’s (and other characters as well) flow according to Edith Podesta’s journey in discovering Eurydice’s physical and emotional narrative unfolded as the story went on. As a result, she has successfully overcome the constraints laid upon her by a highly designed space – of which theatre aesthetics had taken care of itself fully – where the barren nature of the bare stage was overtaken by the bodies on stage, allowing the colours and shade of the performance to shine forth in the designed space. Viewpointing, as a strategy, seems apt.

In a nutshell, Edith Podesta’s work seems to indicate that there isn’t a divide between design and art after all. For design focuses on creating for the human being – with design disappearing within the human being – in order to prepare him or her for the human experience. And Art – in its quest to question human existence in relation to the world around him/her – will take the design and aesthetics within the human bodies to the human experience. Hence, in the theatre piece Eurydice, director Edith Podesta – in her words in describing herself as seen as someone interested in domesticated beauty – seems to have transcended her own description in bringing the highly designed set piece to prepare the bodies on stage, and through her artistic intervention in using View-pointing as a artistic tool, she has successfully brought the set design – in her blocking strategies – to a living state inhabiting the bodies, bringing them into Sarah Ruhl’s world of the myth Eurydice.

The Studios, Esplanade Theatre presents Velocity (Horse, Taiwan) | A Review
Hokkaido (Or Somewhere Like That) Festival Residency and Commission by daniel k (aka diskodanny)