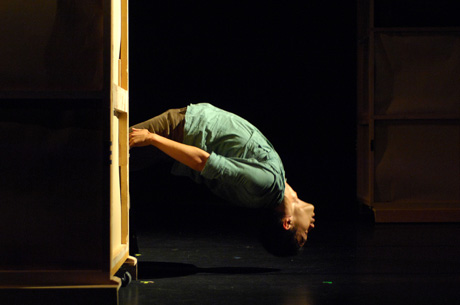 Velocity and the Chinese Body

“Velocity,” the evening-length work that Horse presented in this American debut, looked essentially like a series of favorite bits, set to well-chosen music by composers ranging from Mozart and Bach to John Cage and Michael Gordon. The piece ran out of steam toward the end, but until then it was a feast of evocative, playful small dances showcasing the supple physicality and subtle dramatic gifts of its performers (Mr. Chen, Wei-Gia Su, Yu-Ming Yang, Yi Huang, Tzu-Ling Chang and Yung-Yu Kao). (Dunning)1

On first reading, it seems The New York Times dance critic Jennifer Dunning wasn’t very impressed with this piece of work in 2008. But there was a tinge of hope there, for she saw the potential of these dancers in doing more, better. 2 years on, having re-organised the dance work for the performance run presented by The Studios, Esplanade Theatre’s on the Bay (Singapore) from 30 April to 1 May 2010, it seems Dunning’s observation was spot-on. The dance did not only show any signs of “losing steam”, but has captured essential nuances in movement.

Taiwanese all-male dance company Horse (http://www.horse.org.tw) – a branding position used to define new metrosexual male talents in pop dance culture – helmed by group leader Su Wei-Chia and artistically directed by Chen Wu-Kang — both performed in the dance piece reviewed herein — should not be permanently positioned as such, for their potential and dexterity shown in performance could possibly bring them further in their dance careers. This is clearly shown in the work Velocity, where narratives are non-existent, leaving a concept of speed in movement in the dance space. In Taiwanese dance writer Zhou Zhi-Mu’s ( 鄒之牧) words in her nomination statement for the group in the 2008 Taishin Arts Award (as translated): the work has departed from the traditional narrative structure of dance, boldly using a concept as a hinge to creation, through the use of theatre design, fusing with concept and body, formulating a feast of abstract and realistic images.2

Within this context, one would know that watching it as a narrative might leave spectators out in the cold. But if one were to look at the piece of work within the Chinese cultural milieu through movement rhythms of 抑(compression)、扬(wave)、頓(staccato)、挫(slice)、快(fast)、慢(slow)、缓(quicken)、急(hurry)– commonly used in Chinese opera performances — it would be clear that these young dancers have attempted and been successful in certain parts in achieving the nuances in their modern dance movements. In artistic director Chen Wu-Kang’s words (whose impressive performance in Velocity deserves special mention) in their nomination video for the 7th Taishin Arts Award (as translated): the dance forms are not aimed at crossing another border, but to use different strategies and methods to present them in diversity, presenting them in an abstract form.3

The Chinese cultural milieu is elusive, especially to western audiences. For the central idea of not “coming on straight to the point” has always put westerners in bewilderment. In Chinese art – especially in Chinese calligraphy and ink paintings – the idea of going round problems and constraints, with an added layer of nuance in mutual respect, has allowed Chinese artists to effectively deploy metaphors, images and allegories in their expressing of their true intentions. Hence the spirit of abstraction is inherent in any Chinese body and mentality. If we were to listen to artistic director Chen Wu-Kang’s words in the video again, one could sense that Chinese words such as “份量” (portion and volume) could take on different meanings to a Chinese choreographer, as compared to a western one. I am not saying that there isn’t a system of a similar kind in western dance. Choreographer Rudolf Laban’s movement analysis focusing on 4 subcategories, with 2 opposite polarities: Time (Sudden/Sustain), Space (Direct/Indirect), Weight (Strong/Light) and Flow (Bound/Free) seems close to the Chinese interpretation of movement. But there are subtle differences. The words “份量” (portion and volume) is a sub-divide of Laban’s Weight (Strong and Light), with attention to the portion (fraction) and volume (half-empty or half-filled) of movement. Many such instances permeate within an Chinese body.

So through the reading of the dance through Chinese verb-forms such as 抑(compression)、扬(wave)、頓(staccato)、挫(slice)、快(fast)、慢(slow)、缓(quicken)、急(hurry) will allow us to discover the actors’ bodies even more. The interactions among the bodies – especially in duets and group work – could be seen as an experiment of such, likened to that of freeze frames in a film, dissecting the emotional flows within an actor’s body.

This is especially so in the dance section involving all dancers in suits, where they entered the space likened to that of people searching for company, but only to realise that upon meeting another person, they are not exactly ready to meet anyone new. The section was played to the wonderful music entitled Mazzolin, composed by Riccardo Tesi, in album La Bal Musette Italien. Upon meeting each other, they began this process of interacting with each other. Movements traveled with strong musicality, likened to the phonetics of the Chinese Language – both the heavy and light accents – not to mention the change of tonal qualities in their movements. The dance section felt strong at times, but also seemed rather calm in another moment. But the key is not to dicipher the dance steps, but to allow the energies emerging from the bodies, likened to spoken words of Mandarin traveling to one’s ears. The following section was equally impressive, where elements of fun and enjoyment permeated the scene, bringing audiences to a space where they could totally be themselves and free.

When talking about freedom in expression, there is also a need to appreciate freedom in imagination. Many a times, in Velocity, spectators were allowed to wander about. Chen Wu-Kang’s solo in studying the movement of an object bouncing off different parts of his body is a great example of how freedom of the mind could make evocative images through the body, not to mention group performances with other dancers, even when travelling on the bicycle, cycling through the suburb. The images brought spectators back to the time when one was younger. Memories of such did not allow one to forget the past, where tracing the purest of body movements likens that of messy entanglements in the pursuit of memories.

This messy entanglement comes with the great showing by Chang Tzu-Ling, whose dance solo – with Chen Wu-Kang at the back cycling through the plains – poetically captured the essence of the memory. His body likens to the strokes of Chinese calligraphy – for it didn’t help that the music played to Cello music (Libertango, performed by Yo-Yo Ma, in album Soul Of The Tango : The Music Of Astor Piazzolla) reminded me of Cursive 《行草》by Taiwanese choreographer Lim Hwai Min.

Chinese word forms can be used to propel a Chinese body in space. For Chinese characters and their meanings have very intimate relationships. It allows Chinese artists to explore their creativity. For example emotions in the dance piece, likened to the word “笑”字 (laugh)，活泼可爱 (lively and adorable), “哭”字(cry)，愁眉苦脸(the ugly face)；“妩媚”(coy – with a tingle of seduction)，少女的娇颜潜入心底(the beauty of a little girl – with an emphasis on the beauty of her face and the attitude of coyness), to name a few. Chinese verbs could be used in imagination, like an ink painting. Hence the Chinese has this phrase “字画” : where Chinese characters enter a dancer’s body to draw.

To me, the watching experience could be summarised in these Chinese words: “场寂孤体，疏离逝去，会心之处，不胜言语”: Lonesomeness could only be felt within, not with words. I believe New York Times writer Jennifer Dunning and I have same sentiments, for her title to her review on Velocity is High School Jinks, Supple and Subdued. Words “Supple” and “Subdued” have both physical and latent meanings, likened to how Chinese characters invoke images in an artistic work. In Dunning’s final paragraph: “Solos at the end suggested that the men were also capable of straightforward, resonant modern-dance performing. But they came so late in the kaleidoscopic spin of vignettes that they were less affecting than they might have been.”4 – She acknowledged their skills in modern dance. For the form has freed many dancers from the ballet tradition – I will always remember the picture showing how Isadora Duncan danced in the forest without her shoes. But the power of freedom — no matter how free it it is – has a very important counterpoint, and that’s restraint. For this will bind structures together. In the case of Velocity, by Horse (Taiwan), the restraint lies in its subdued meanings – inherent in the Chinese way of the middle core (中心思想）.

Red Ballerina, by Theatreworks
Naturalism in Theatre has its Relevance in Shaping Human Experiences, through Design and Stage Blocking.