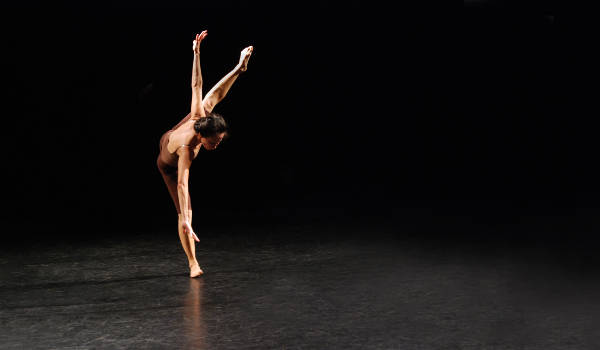 Dancer Lim Mei Chian opened the scene with a series of nuanced spider-like movement that focused on moving joints of limbs. She executed it beautifully. At that moment, for me, there was a suspension of disbelief. For a very brief moment, I believed that an animal/insect or living creature existed on stage, rousing and waking up from dormancy. Choreographer John Mead mentions in the programme notes, “…the dancers are not trying to mimic any particular animal …(but) exploring qualitative movement that is derived from the exquisite movement capabilities of all animals …”. (Mead, 2018). The opening scene reflected Mead’s intention clearly. Subsequently, as the other 3 dancers (Jason Chia, Adeline Ee and Royston Fan) came on stage, the choreography took the audiences on a journey to appreciate the process of evolution and adaptation animal life might have gone through in the process of surviving and interacting with other living animals.

Biologist Richard Dawkins proposed a rather radical idea that “An animal is a model. Any organism is a model of the world in which it lives” (Dawkins, 2018). He said that through the reconstruction of an animal’s body, a zoologist would be able to reconstruct the world the animal lives as well as the world its ancestors lived. Like human beings, by looking at our bodies, in addition to culture, we are able to see how we live and have been living. So when the dancers came together to execute Mead’s choreography from solos to duets and quadruples, every tableau and image they strived to recreate was the world out of which the animalistic movement quality represented. The most beautiful aspect of the performance was the transition from 1 set of movement to another, which was near seamless and had a poetic fluidity.1

Relationships among the movements feature prominently in the choreography. Every body needs to make way to another in order to move, or I would say progress, to the next evolutionary stage. The ebb and flow of the group movements reminded us of the dependency every organism needs in relation to one another, likens ants forming a raft in order to survive drowning when they are in water. Mead’s choreography attempted to create models of relationships animal movements form. Much of his choreography could be applied with human models of relationships too. These models could be literal or imaginary.

Literally, as bodies came together, there was negotiation. Negotiation could be carried out on 2 levels: Emotional and Physical. Emotionally, dancers Royston Fan and Lim Mei Chian tried to edge and nudge each other keeping their emotional stimulation in check. Movements were difficult and demanding at times; light and springy, in other moments. Adeline Ee and Jason Chia, on the other hand, focused on the physical demands of the animalistic movements. Besides showing how human beings and animals are different, and the constraints posed by the constructions of different bodies, their dance routines also showed how human beings could learn so many things from other species of living organisms.

In the realm of the imaginary, Mead’s choreography did not seem to provide ample space for audiences to imagine the possibilities of these animalistic movements to their lives. For one, when we are static and not moving, our bodies are not definitively at rest but processing information and making adjustments to the small changes in the environment, as well as the predicting what would be coming towards them. That was the most intricate phenomenon in the animal world. Dawkins illustrated this succinctly using the example of a herring gull:

Think of a herring gull adroitly riding a sea cliff’s upcurrents. It may not be flapping its wings, but this doesn’t mean that its wing muscles are idle. They, along with the tail muscles, are constantly making tiny adjustments, sensitively fine-tuning the bird’s flight surfaces to every nuance, every eddy, of the air around it. (Dawkins, 2018)

Conversely, an alternative view, the dancers could have tapped into their emotional sensibilities to reflect and present the subtle movements when they are static, making the static movements even more nuanced with finesse. That would be a nice compliment to the fast and agile movements that a deer or leopard might have.

All in all, Atoll is home to all kinds of organisms, not just animals and insects. The choice of this title for the dance production signals the diversity of animal movements choreographer John Mead wants to explore and inhabit in his choreography. Not only he has succeeded in doing so, he has also opened up many possibilities we could learn from animal movements, like scientist Richard Dawkins has devoted himself in doing so for life.

1. 知己間的身體對話 | Dialogue with A Contemporary
Four Workhorses and A Turtle in Search of An Identity