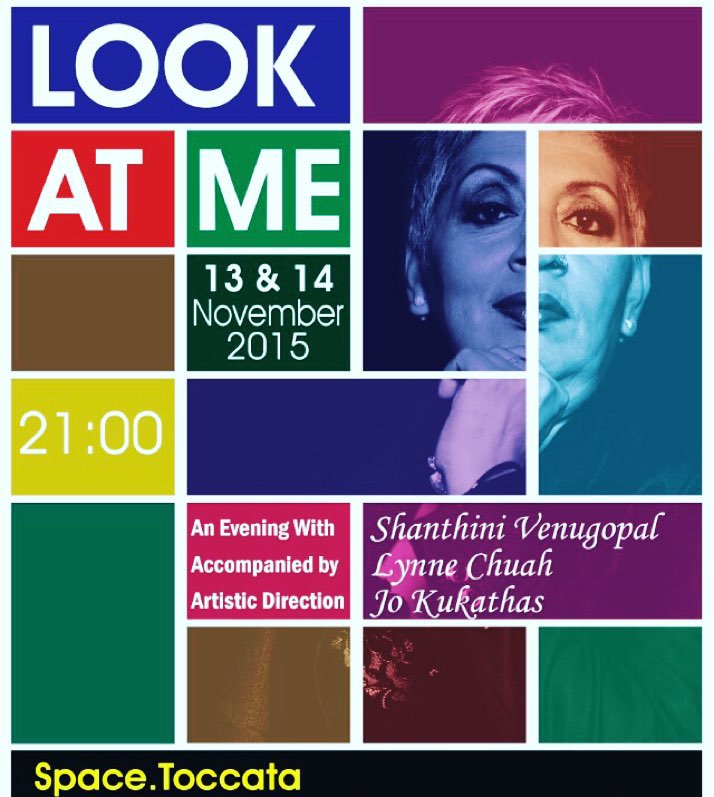 I came across a Facebook post that argues for the non-politicisation of grief, in the aftermath of the Paris attack early Malaysian time yesterday. Many people accused the over-privileging of the Paris attack over many others in many other countries. In theatre, we do the same too. We privilege some performances over another, some performers over others, some companies over others – We are biased, for in one way or another, we are “affiliated” to one or more performances, performers, companies, their aesthetics. Shanthini Venugopal’s concert-cum-monologue Look at Me has a very personal (or some might say self-indulgent) title. It is the truth. Literally, audiences go and “look” at Shanthini Venugopal in the performance space Tocatta Studio, located in SS2.

Looking is a dangerous thing. We look and usually get surprised in a nasty way. Voyuerism provides more pleasure, for it contains elements of imaginative pleasure. The former uncovers the truth, which is usually unpleasant; the latter, the positive side of the truth. Hence I choose the latter. This is not a review, nor it is a piece of academic writing on theatre. I write as a voyeur.

I learn many things from Shanthini Venugopal’s show. As I age, I reflect and discover many things in life. Gone were the days where I possessed abs and lines. Now they have been replaced by flabs. As my hair turns grey as days go by, I secretly hope that something better will populate the shell on which these salt and pepper sits on. Shanthini tells me to just do what I have always wanted to do, whether or not it makes me happy. Something needs to be done, for a variety of reasons. Her performance reinforces my belief that making an event that speaks to people that matter is more important than anything in this world.

Saying this, I would be accused of being self-centred and insular, maybe not socially-loving – like some socially conscious theatre makers are. However the very core of one’s existence lies in his/her actions to almost anything in this world. Some need to speak to society; some need to speak to their family and friends; some just simply need to speak to themselves. Shanthini speaks to her family (specially to her son); she speaks to her friends, both personally and professionally (as a singer with the Jelly Beans and actor with Instant Café Theatre (ICT) company); she speaks to herself, taking stock of what she has accomplished thus far and what her future might be.

Her songs are not original. Some are popular ballads that have moved many in this world. Some are popular satirical songs from ICT that has rallied many Malaysians in expressing their love for the country. But the truth of the matter is that these songs have made her for who she is today. She speaks passionately to the ones whom she wants to speak to every evening. In theatre, we call this Confessional Theatre. It is a class of its own. A review written on it will be an infringement of Shanthini’s privacy. It will politicise the theatre piece if I write it as a reviewer. Personally, having created and performed in such a theatre form back in Singapore, I know profoundly how politics could mutilate an artist’s private moment with his/her constituents.

I am blessed to have been invited to Shanthini’s personal party. We never met. I only looked at her from afar, for I have read and learnt of her work in Malaysian theatre, not personally. She has invited me to her abode, to which I respect and love. As mentioned at the beginning of this small piece of reflection, in the spirit the Facebook posting has enlightened me, Shanthini’s personal moments should not be politicised. It could be discussed in another time. For now, let’s spend some time just being with Shanthini Venugopal at Tocatta Studio in SS2.

From the eyes of Brandon: Cheras, the musical
D’Motion 2015 | Programme A | A Review